Sphero burst onto the scene last year with their exceptional Star Wars BB-8 Replica. Since then, it has enjoyed plenty of success and Orbotix, the company behind Sphero Robots, is getting more serious with the introduction of the SPRK+. Check out our list of best robot toys for kids to learn more! 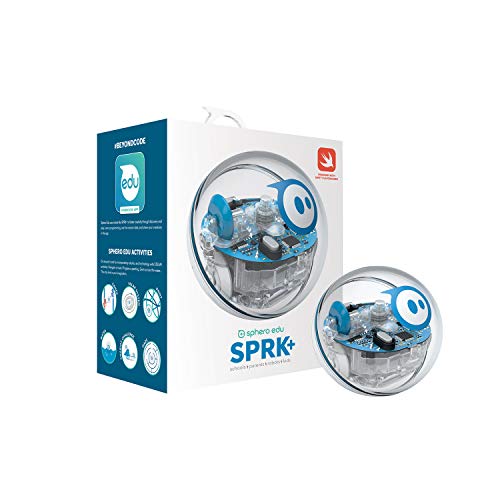 The Sphero SPRK+ is a great toy for kids ages twelve and up that will introduce them into the world of coding. This age recommendation can be pushed to 10, but any lower than that will be a steep learning curve. Still, if your child is into computers, or showing inclinations of that, then the Sphero SPRK+ could make the perfect toy! If they’re into flight games, take a look at our hands-on with HotSeats $8,000 triple screened flight simulator review.

In essence, the Sphero SPRK+ is part activity hub and part junior development environment. Children can use the Sphero Robot Ball to code their own SPRK+ programs or download and run exercises with ready-made programs. For these reasons, the Sphero SPRK+ is recommended for ages 12 and up, but this can be pushed to 10 if you really want to. If you don’t have a child at that age yet, or if you don’t think they’ll fancy coding, try the more traditional Really RAD Robot Toy for Kids.

The Sphero SPRK+ will have to charge right out of the gate, and that takes about three hours, which gives you ample time to download the Lightning Lab App. The lab app works on iOS, Android, and Amazon Kindle devices. If you’re looking for a robot toy that doesn’t require the use of an app, try the Top Race Robot Dog. Although you can use the Lightning Lab app alongside other Sphero Robots you cannot use the SPRK+ with other Sphero apps. If you are a super fan of Star Wars, one of the best droid robot toys you can purchase is described in our Sphero bb 8 review.

The SPRK+ is one of those educational toys that genuinely makes learning fun. It will be incredibly fun for children to assemble their own blocks of code and then watch as the robot does their bidding. The robot gives instant, physical feedback so your child will know if they’re doing things right or wrong. It retails for $102.00 on Amazon so if you’re on a budget, or your child isn’t twelve yet, consider the Sikaye RC Robot Toy for Kids.

For those who want their child to learn coding the fun way instead of going to a computer bootcamp (which, let’s face it, they probably eventually will), the Sphero SPRK+ is the way to go. The SPRK+ and the Lightning Lab App combine to make a fun little device that’s endurable and entertaining for hours (well. hour) on end.