If you need a full-frame mirrorless digital camera with quick shutter speed, a brilliant autofocus system, and an advanced image stabilization system, the A7 II Sony is a superb choice. The Sony Alpha range is known for its interchangeable FE lenses, which allow different focal lengths. Sony Cameras ooze quality and the II Sony A7 can compete with anything on our best digital camera list. 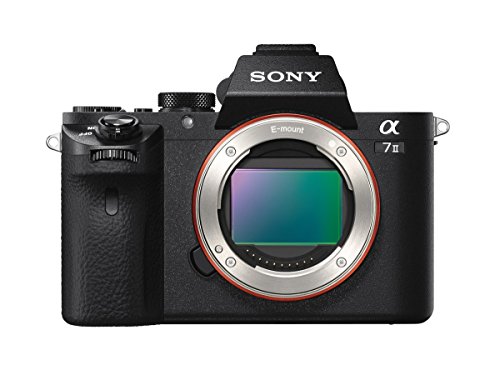 The Sony A7 II is a full-frame mirrorless camera that delivers fantastic image quality. Its innovative in-body image stabilization works with a five-axis system to compensate for movement. Compared to the original A7, the A7 II features a full magnesium alloy construction and stronger camera body.

The Sony A7 Mark II has already been replaced by the new A7 III but still has much better performance compared to many other cameras. The 24-megapixel sensor delivers excellent image quality, even at high ISO settings and low light environments. It also has a built-in focus peaking function, full-frame sensor, and different focus modes. These include a manual focus and autofocus system. The Sony A7 Mark II can record video at 5p in AVCHD, XAVC s, and MP4 formats. This full-frame camera takes both JPEG and RAW files and is a worthy competitor to the Canon PowerShot SX530.

The full-frame of the Mark II A7 is very sturdy with a deep grip and textured coating. It’s user-friendly and has a prominent shutter button that’s hard to miss. The obvious advantage of mirrorless cameras is the option of adding various e-mount lenses. For those shooting at difficult angles, the II Sony A7 has a tilting 3-inch LCD display. It also has a hybrid AF system that offers faster speed and tracking. The electronic viewfinder, and dynamic range of 13.6 Evs put it above cameras like the Sony DSCW800.

This Sony A7 II review has found it to have excellent value for money. It’s a well-built camera with many options for customization. It produces brilliant full-frame images from all the different focus modes, including hybrid AF. The camera is extremely versatile and can be used by both beginners and some professionals for outstanding picture quality. It comes with both Wi-Fi and NFC connectivity and memory card slots. The price is well worth it for those wanting an outstanding camera that can accept the lens of their choosing. Beginners may want to check out the Canon Powershot ELPH 180

Sony A7 II Wrap Up

The Sony A7 II is still a great choice as a full-frame mirrorless camera. The A7 II boasts vivid pictures with astonishing quality. Unfortunately, it lacks a built-in flash and generally has low battery life. These are minor issues and shouldn’t detract from the fact that this is one magnificent camera.

After quitting IT hell I found a new lease of life as a writer. I currently follow my passion, writing about different topics like product reviews, video games, and insurance.