SixThreeZero Around the Block Bike Review_

An easy to carry bike that also comes in different variations to fit your needs, in terms of both size and functionality. Probably standing out as one of the best bikes you can get for cruising, the SuxThreeZero Around the Block bike also provides you with a sturdy body and even a pretty simple but elegant design. Thus, available at a pretty affordable price right now, the SixThreeZero Around the Block cruiser bike will make those rides beside the beach all the more enjoyable. 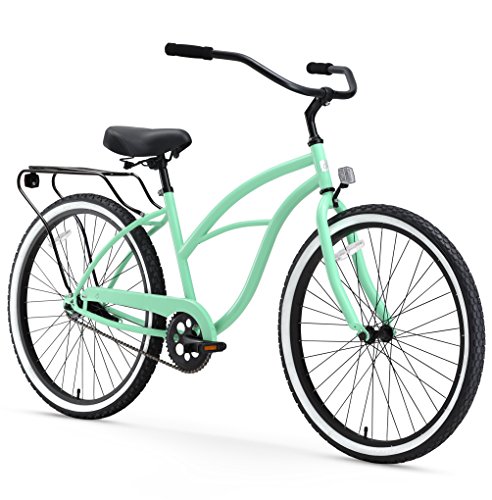 Why We Like It – SixThreeZero Around the Block Bike

With a 17 Inch frame of steel as its foundation and strong aluminum wheels supporting it, the SixThreeZero Around the Block Bike has a pretty sturdy build, unlikely to give up on you. It comes with some foam grips for the cruiser like handlebars, allowing you to sit upright while riding and be more relaxed overall.

Apart from that, the SixThreeZero Around the Block Bike tends to change bit by bit through each of its variations, especially the different speeds or gears it comes with. While the Bikes are generally differentiated between for men and women, mostly adapting to the body size of the person in the manner, you also get to choose from multiple gear options starting from the single gear bike. You can move it upto a 3, 7, or even 21 speed bike making it more adaptable to climbing a hill in the process, adjusting the resistance and force needed to pedal up. Other than that, the bikes also have different braking systems, with the single speed version of the Around the Block being stopped by coaster brakes through the act of pedalling backwards and the multiple speed ones having hand brakes for both the front and rear tires. The coaster brakes may be new to some people, but for casual use like a ride through the park or neighbourhood, the coaster brakes aren’t really that bad. When choosing the type that’s best for you, first take into consideration which variant of size you want and whether or not it will fit you, and to make this process much easier, you can use the weight and height input on the SixThreeZero website to quickly know whether or not the variant of the bike will fit you. But for a general idea, the SixThreeZero Cycle does limit upto a weight of 300lbs with the height ranging from around 5 to 6 feet tall.

Adding to the braking power are the tires that are generally known as cruiser tires which are ultra smooth and measure to be 2Inches. They cover the 26-Inch, 2.125 Inch wide wheels, making for some good traction while braking and also providing a comfortable and good ride. Moreover, you can also choose from a number of different accessories other than the already included rear luggage rack for carrying occasional stuff. Your options range from a basket upfront or even a baby seat if you need one.

Moving onto the set up, the SixThreeZero Around the Block Bike comes 80% assembled, but you can easily build the rest through the many instructional videos online. The standard single speed model can be built much more easily due to the lack of wires, but all of them are fairly easy to set up, taking about 1 and a half hour for the multiple gear versions. You can also opt for it to come completely built but that will cost you extra.

Thus with all that, the SixThreeZero Around the Block Bike makes for a great bike to ride through your school campus, to work or even for going to the market. You get a rated mileage of about 20 to 30 miles on their official website making it a great beach cruiser bike. It does however need to be taken care of to a certain extent, but other than any form of extreme rough use, the SixThreeZero Around the Block Bike will serve you well, that too for a long time.

Weighing 36lbs when fully set up, the SixThreeZero Around the Block Bike is heavier than the Schwinn Loop Folding Bike as well as the Tommaso Bike, but it is still most certainly lighter than the Mongoose Dolomite Mountain Bike. This places it on the middle ground, pretty easy to carry around when you need to, but not light enough or compact enough to be carried through the subway like a folding bike.

Other than that, with the 17 Inch metal frame, while it can’t be taken through subways, you can use the SixThreeZero Around the Block bike for commuting to and from school or work. And as a plus point you can also attach a separate water bottle to the Bikes frame with the custom model.

As for the design and overall colour, the SixThreeZero Around the Block Bike comes with choices of bright coral, light plum, mint green and teal blue for the frame paired with the white walled tires. Thus making for a pretty simple but good look, the SixThreeZero could easily be a great addition to your already amazing aesthetic.

Priced at around $300 (lower on the smaller models) the SixThreeZero Around the Block is on a similar price range as the Schwinn and Mongoose Dolomite Bikes, and thus it is relatively affordable. You get a good amount of durability, functionality in terms of gears and speeds and even a good aesthetic. Thus with all that, the SixThreeZero Around the Block Bike is a great cruiser bicycle with a great value for riding in the city streets or even a comfortable ride beside the beach. But, for more straining tasks, like riding up steep inclines or riding very frequently, the Mongoose Dolomite Mountain Bike and the Tommaso Imola Bike might be better options.

SixThreeZero Around the Block Bike Wrap Up

While it may not be not be the most portable or even the best bike for road trips, being among the more affordable options of SixThreeZero Bikes, the Around the Block Bike is a much cheaper alternative of the SixThreeZero EvryJourney. You get a sturdy solid build, that provides you with a good design paired with the multiple options of sizes and functionality, all while looking good at just around $300. And so, with excellent customer service who make sure you have a good time cruising with one of the best bikes out there, the SixThreeZero Around the Block Bike is a great option worth considering.