When looking for the Best Air Purifier, or more specifically the Best Ionic Air Purifier, people probably want something that provides high quality air purification methods, and the Silveronyx air purifier with true HEPA filter may be that purifier. The SilverOnyx has more than 2 methods of purifying the air while having a light weight design. 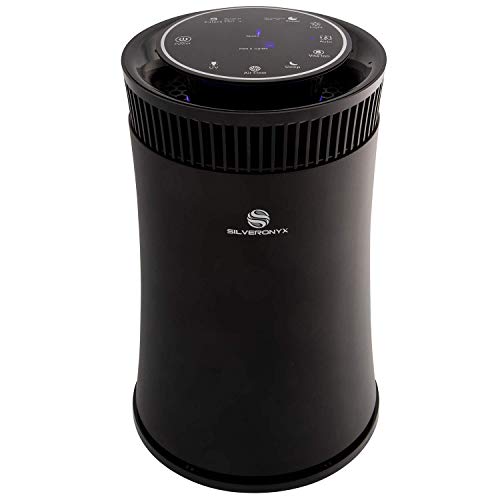 Why We Like It – Silveronyx air purifier with true HEPA filter

The Silveronyx air purifier with true HEPA filter offers high quality air purification due to its 5 stage process containing both a UV C light and an Ionizer. It also has a user-friendly control panel with a simple, but sleek design that makes selecting different features very simple.

The SilverOnyx air purifier has a 5 stage True HEPA filter that contains a mesh pre filter /HEPA filter hybrid, an Ionizer, UV C light/ UV sanitizer, and an activated carbon filter. The HEPA carbon filter reduces things such as odor to improve air quality while the UV light and Ionizer. Users also have access to 5 fan speeds to choose from, sleep mode, auto mode, and a timer.

Versatility (HEPA, what does it filter, odor reduction etc.)

By using the True HEPA H13 charcoal filter, air purifiers like this can capture pet dander, dust, fiber, and smoke. While it doesn’t capture the most types of contaminants, it’s able to capture about 99.7% of particles that are no smaller than 0.3 microns, very similarly to the Pure Enrichment air purifier filter. Also like the Pure Enrichment, it has a timer, but it can be turned off after longer intervals.

It weighs 5.39 Lbs., weighing less than the Aeramax 300, which weighs 12.5 Lbs. Since it’s an air purifier, it will inevitably have weak points to allow the air to travel through it in order to be filtered, as every filter in this purifier has holes, with each filter having a different size hole than the last. However, it’s designed in a way that the shell only has holes on a small portion of the air purifier without hindering the air purification process.

While it’s cheaper for a powerful air purifier, it can fetch a heftier price despite how simple the design is, especially since it has more than 2 ways to kill germs. The UV C light and the built-in Ionizer are probably what affects the overall cost the most, and the type of 5 speed H13 True HEPA filter that is physically compatible with this air purifier costs no less than $36.

Customer reviews have mostly been positive, praising the purifier for its performance and low noise. One reviewer said that it works well for the old house that they live in, as it gained a smell over time that combined with pet odor before buying the purifier.