The Shure SE215 is one of the best earbuds with an under $100 price tag on the market today. Shure has managed to get themselves into a lower price bracket (they have historically been known to be quite expensive) and still maintain the quality sound reproduction they are known for. 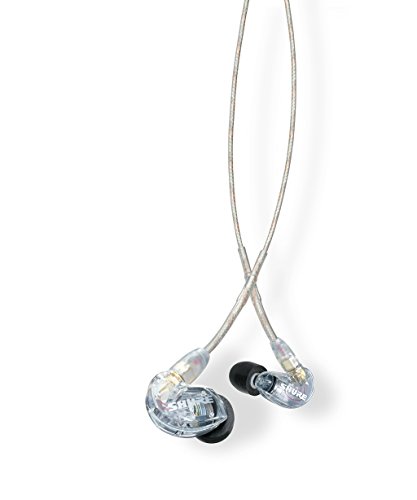 Shure is already a pretty big name in headphones. Their prices have usually been pretty high, though, and most folks have decided to look elsewhere for more affordable headphones. With the release of the SE215 Shure has decided to push its prices down into a lower register and still maintain the quality sound they have been known for. And they have accomplished this.

The sound quality is impressive, as the frequency response ranges between 22Hz-17.5Hz, and versatile in giving songs the sound signature they need or require. The treble isn’t in-your-face in rock and pop songs and the bass, while being the Shure SE215’s biggest sound weakness, still provides a good amount of boom-boom-bap in these in-ear monitors. The Sennheiser Momentum In-Ear is a comparable product to the SE215 in price and sound reproduction. The lack of any in-line controls in the SE215, while not necessarily a deal-breaker (at least not for me), is a strange decision and can turn off some folks.

As clunky as the design of the SE215 in-ear headphones may be, finding a comfortable fit shouldn’t be too hard as they’re designed to fit snuggly, come with Comply foam tips, and the included earpieces range from small to large. The detachable cable is a rare and nice touch and makes cleaning, repairs, and changing out ear tips easier. The noise isolation is better than average because the SE215 slips deeper into the ear without causing undue strain. If you need a pair of earbuds that actively offers sound isolation, we recommend Bose QuietComfort 20.

One of the most understated aspects of the Shure SE215 is the excellent yet understated build quality. They are meant to be able to take some punishment and still keep going. V-MODA, though known for their over-hear headphones, are now building tough in-ear headphones that can live up to a reckoning too, if that’s your thing, with the release of the V-MODA ZN. Overall, you’re getting a lot of value with the Shure SE215. If the lack of inline controls really bothers you, Shure sells a cable that comes with inline controls can replace this one. We just wish they had already thought to include it with their headphones.

Shure has been in the headphones game for a while, and you should check them out. Now with an affordable headset it’s nice to know people can experience amazing sound quality without breaking the bank. So do yourself a favour and ditch the terrible, uncomfortable headphones that came with your phone and go out and get yourself some better headphones!