I’ve heard that Sealy has the best mattresses and wanted to put that to the test.

Never heard of a “bed-in-a-box” before? Don’t worry, because if the recent deluge of new mattresses hitting the market in the first half of 2016 are any indication – you won’t be able to forget them before the year is out. If you want a mattress for sciatica, we also have you covered.

If you’ve listened to a podcast in the past few months you’ve probably heard incessant ads for the Casper mattress or the Novobed, while the UK-based Eve Mattresses has just begun shipping their own units stateside to muscle in on the competition. All three brands are relative unknowns both in the US and worldwide, and are looking to capitalize on what looks to be a new style of compression technology that the big mattress makers haven’t gotten wise to yet.

Sealy on the other hand is a monolith in the mattress industry, with a pedigree that stretches back literally more than a century. After merging with Tempur-Pedic in 2012 to form “the world’s largest bedding company”, the manufacturer has finally entered the fray with their answer to these upstarts, hoping to dominate once again as the undisputed king of making the best king-size (and all other size) beds in the business. Sealy’s Cocoon is a mattress made with a proprietary blend of memory foams, all designed to compliment and support each other and your body as you sleep. Check out our Puffy lux mattress review for a hybrid memory foam mattress that has contour-adapt coils for temperature control, additional stability, and support for back pains.

Sent in a box no bigger than a few feet across, the mattress is compressed at the factory, shipped, and expands once it’s released from its vacuum-sealed packaging. This process makes it easier for Sealy to get the mattress direct to your doorstep, and portable enough that only one person is needed to get the mattress set up for sleep in a matter of five minutes or less. You can also get inspiration for your bedroom by reading our the Provençal bedroom review.

Like its competitors, the Sealy Cocoon is a 100% direct-to-consumer endeavor; no mattress showrooms or middleman markups required. Instead, you simply go on Sealy’s Cocoon website, select the firmness and size of the bed you want, and within two weeks a box shows up on your front porch with everything you need inside. Our queen-size firm model was $849 all said and done, which is comparable to what we’d expect to pay for a mid-range model if buying through a more traditional retailer instead.

Also like the other guys, Sealy offers a 100-day no strings attached trial, during which you can exchange your mattress for a different firmness setting, or return it completely if it wasn’t up to your sleeping standards. Both shipping to and from the factory is free of charge, which is nice when you consider what it might cost if you were getting it delivered from a standard showroom instead. The Cocoon also comes with a 10-year warranty, which will cover any sort of deterioration like material tearing or dimples that appear on the surface of the bed.

When the box arrives, it’s pretty much a two-step process: open the box, unfold the compressed mattress where you plan on sleeping, and pierce the packaging. Once you do, the surrounding air will rush into the mattress, filling up to capacity within about a minute. The effect alone is pretty cool, seeing a nearly flat piece of fabric morph and transform into a real live mattress right before your eyes.

The first thing you’re bound to notice as soon as the mattress is expanded is the smell. If I had to describe it, I’d call it sort of a Windexy, bleachy chemical smell that reminds me a lot of the old cleaning closet I had at one of my first jobs.

Now, I can’t say how it is for other bed-in-a-box systems as I haven’t personally reviewed any besides the Cocoon, however our editor Rex Frieberger also noticed a sort of “factory-esque” scent coming off his Eve mattress during his review of that bed. I’ve only bought two mattresses in my lifetime, and neither had this particular scent, which leads me to believe it has something to do with the way the bed-in-a-box system is compressed and shipped.

According to the company’s website, Sealy says it’s expected that the smell should dissipate within the first week of ownership:

“When your Cocoon™ by Sealy arrives, there may be a slight smell. Think of this like the smell in your new car. It’s the result of the cells in the foam opening. The most important thing to know is that the smell will disappear—typically during the first week. Just as important to know: the smell is normal and short-lived.”

Personally, I have to mention that even though the smell did eventually dissipate within the first seven days – those days were not so fun to push through. The smell is at its most intense during the first four days, to the point where even with a filtered air conditioner recycling the air in the room 24/7, I still found it difficult to work from my desk a few feet away for more than an hour at a time without developing a pretty nasty headache.

Because it’s on their support page I’m sure Sealy is aware of the problem and has their engineers working on a potential solution, but as a brand new user I was so put off by the stench I actually spent the first night sleeping on our couch downstairs due to persistent headaches and discomfort.

Thankfully after the smell was gone for good, it was all smooth sailing from there on out.

For most of my life I believed that having a soft bed would automatically be better for your back, i.e.- less resistance equals less stress on your muscles. After doing some research though, I found that the jury is still out on whether soft is better than firm or vice versa, which is why I opted to go for the firm choice instead. The bed it replaced was about as soft as they come, not only due to years of wear and tear, but also the 3″ thick foam layer I had lining the top for that added “sinking” sensation.

While the first few nights on the firm Cocoon took some getting used to as far as how I positioned myself (side or stomach), it wasn’t long before I noticed a real difference in how I felt both getting in bed after a long day, and the way my body was responding after waking up from a full night’s rest.

Whether it’s the fault of my old bed or the 20-year battle with keeping my posture straight while sitting in a computer chair, in the past few years I’ve developed several lower back problems which no amount of massages, physical therapy, or ibuprofen have been able to alleviate. After two weeks (and a few more days as of writing this review) on the Cocoon, I can say with confidence that while the pain in my lower back isn’t completely gone, it has been healed to the point where it’s more of a minor annoyance than the debilitating problem it was just last month.

It’s hard to guess if this is the result of switching to a much firmer style of mattress or it’s the Cocoon’s magic alone. Either way, however, the Cocoon has enabled me to sleep comfortably without shifting during the night, and sit in a chair without constantly feeling pressure on part of my spine. For that much alone, I’m sold as a lifetime devotee.

With fresh contenders like Novobed, Casper and Eve all doing whatever they can to snatch up a portion of the bed-in-a-box market in a hurry, it’s nice to see industry stalwarts like Sealy answering with a bed that we know will be comfortable no matter what, because we already know the company it’s coming from.

Given the amount of time and money I’ve put into trying to solve my back problems, I’m astounded that the Cocoon has accomplished so much in so little time. It’s not clear at this point whether I just needed a firmer bed or Sealy has worked some kind of healing magic into the Cocoon specifically, but either way this mattress is doing its job and then some.

I sleep longer, toss less, and feel looser when I wake up. Despite the problems I had with the initial smell, after it went away I quickly warmed up to the Cocoon and all it had to offer my aging and aching joints. I’m looking forward to the next few months with the Cocoon to see if my back heals up for good, and I’ll be posting periodic updates on this review with details on my long-term experience.

So far though: the Cocoon is easily one of the best mattresses I’ve ever slept on, bar none. 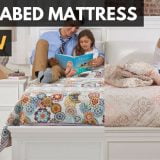 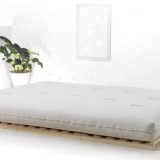 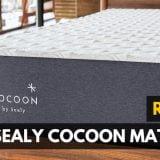 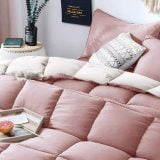 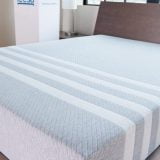 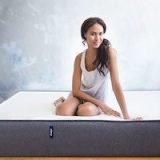