If it ain’t broke, don’t try to fix it.  Samsung must subscribe to this adage, because the S5 is remarkably similar to its predecessor, the S4. Aesthetically, that is. Inside the polycarbonate casing is a brand new processor, a 2800mAh battery, and most importantly a fingerprint reader that attempts to keep pace with Apple’s iPhone 5s. So how does it stack up aganist the best Android phones?

So to put it simply, the Samsung Galaxy S5 is rather unremarkable. Compare this with our Samsung Galaxy Mega 6.3 Review AT&T review to see how the newest model stacks up. Save for the almost perforated backing and ribbed metal bevel, it’s easy to confuse the Galaxy S4 for the S5. But with closer examination there are some key indicators that separate the two phones from one and other.  The USB port, which houses a USB 2.0/3.0 compatible slot, now has a flap to keep out debris, dust and more importantly water.  Yes, the Galaxy S5 is IP67 rated, so it will survive a dip in the water, though Samsung (or the IP rating’s system) doesn’t go as far as to call it waterproof.  So dunk, drop, or swim in the sand dunes of the Mohave at your own risk.

On the back is a new 16MP camera (more on that in a bit), and below it a flash and heart rate sensor.  Place a finger of the latter, activate the included S Health app (this also shows your steps) from Samsung, and your heart rate should show on the screen.  Unfortunately, and much like Withings’ Pulse pedometer, it works inconsistently and requires not only what I assume is a strong pulse, but a steady hand.  Nevertheless, the amount of time and patience that is required to use it makes it, well, almost unusable, as in any sporting situation (imagine what you want) you won’t have either.

The last big design update (more a feature) is the fingerprint reader that is built-in to the Home button.  Much like Apple’s iPhone 5s, you’ll need to teach the Galaxy S5 your fingerprint.  To do this you just simply follow some on screen instructions in the settings menu under the security section of Android.  Ignore the animation, which suggests you use your index finger, and encode the device with your thumb.  Once completed, it’s a easy as swiping across the home button with your finger.  Or is it?  Well, and as I just implied, you already know that isn’t the case.  In other words, if you thought Apple’s fingerprint reader was frustrating, try the Galaxy S5 on for size.  Now, to be honest, it does get easier with time, but regardless, I found it very difficult to consistently unlock the device by fingerprint.  I did discover, after a bit of use, that you can swipe both up or down on the fingerprint reader – it’s much easier to swipe from the top to bottom.  I also suggest not only depressing your thumb to make it as flat as possible, but starting slightly below your thumbprint’s center swirl and continuing to the tip to achieve maximum compatibility, if you will.

Measuring 5.1-inches, the Galaxy S5’s display is slightly larger (by .1-inches) than the Galaxy S4’s.  It’s a moot amount of extra screen real estate (over the S4), though it does reduce the PPI from 441 to 432.  In other words, it’s full HD.  The panel is AMOLED, and yes, as you probably guessed, colors are a bit blown out, at least when compared to the iPhone 5s, which uses an IPS panel.  That said, it’s vivid, offers a wide viewing angle, and looks extremely good when viewing video or playing games.    Moreover, the display’s sensitivity is top notch, and if needed can be over boosted in the settings menu. 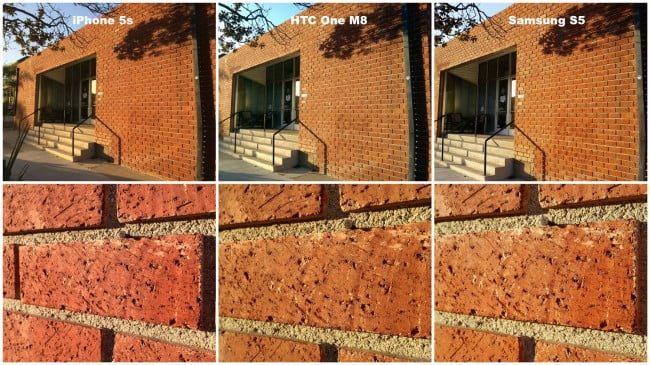 At 16 megapixels, the Galaxy S5’s camera is four times the resolution of HTC’s One M8 and double that of the iPhone 5s.  It can also record UHD video, though you’ll need a compatible display to take advantage of this. There are also a variety of camera effects, including one that allows you to blur out the background relative to a face.  So on paper, the Galaxy S5’s camera is impressive. Unfortunately, not so much in actual use. 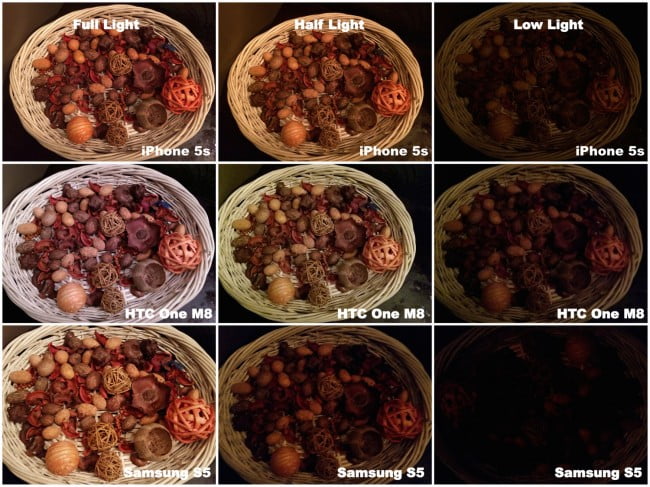 In fact, in normal, well lit scenarios it’s not vastly better than the iPhone 5s or the HTC One M8.  As you can see in the comparison images, both the iPhone 5s and HTC One M8 appears to out perform the S5 in an artificially lit scenario.  By no means am I saying these images are the defacto ruling, but it’s disappointing that the Galaxy S5 struggles in low light as much as it does, especially seeing as low light performance is usually a strong testament (or the weakest link) to a smartphone camera’s prowess.

Lastly, that refocus effect for faces, well, it’s largely a gimmick.  And yes, it only works with faces.

Under the hood of the Galaxy S5 is a 2.5 GHz Snapdragon 801 Quad-Core processor supported by 2GB of RAM.  Compared to the HTC One M8 it’s virtually the same engine, though Sammy’s version has been cranked up a few notches (.2ghz).  In fact, HTC’s One M8 actually feels a tad faster in the core menus, largely because their Sense 6 doesn’t feel as beleaguering, or as heavy, as Samsung’s TouchWiz Android skin (more on that below).  That all said, app to app things are zippy and quick, though the S5 occasionally slows when in dual window mode (Chrome and the camera app), making the feature almost useless, though your mileage will probably vary depending on the apps in use.

Like the HTC One M8, Samsung has done a tremendous job balancing horsepower and battery life.  Samsung’s handset, however, boasts some branded software tweaks (PowerXtend by Lucid) at the system level that allows it to offer stellar battery life.   As to whether or not those system tweaks offer anything above and beyond (assuming both phones are in their normal battery mode) that of the HTC One M8, well, that remains to be seen.  Nevertheless, the TouchWiz battery options are nothing short of impressive.

To be clear, there are two battery saving modes on the Galaxy S5: Power Saving Mode, which reduces extraneous features, such as wireless and auto updates; and the other, Ultra Power Saving Mode, a more extreme feature, that reduces the Galaxy S5 to an almost sub-dumb phone level.  So dumb in fact, that it kills any background processes and converts the phone’s display from a full color eye popping experience, to a black and white, gray scale depressive state.  Enable this latter option, though, and the Galaxy S5 can stay alive for hours.

However, in my short experience, it would seem that Samsung is overstating the Ultra Power Saving mode’s standby time.  Just this morning, at 10:35am PST, I activated the features when I had 12% battery remaining. At the time the Galaxy S5 said the Estimated Standby time was 1.6 days.  Now,  in just 3 hours, at 1:30pm PST, I have 10% battery remaining, and some how that figure has dropped to 1.2 days.

[box_info]Of note, in Ultra Power Saving mode these are the only available apps: Phone, Messages, Chrome, Emergency Alerts, Clock, Calculator, Google+, Memo and Voice recorder.  And of those, only 6 can be added to the shortcut screen.  In order to access a seventh app, one needs to be removed first, which in theory sucks up precious battery life.  Then again, why would you ever need access to Google+ in a pinch?![/box_info]. So, if you want a different device with a longer battery life, we advice our readers to learn more from the Samsung Galaxy S4 Review.

Samsung’s TouchWiz Android Skin might be best described as an icon lover’s paradise.  I’m not sure it’s the most apt description, but it’s the superlative, or lack there of, that comes to mind when thinking in the context of a Nexus device, or even HTC’s Sense 6.  Aesthetically, I find it less appealing, and perhaps even less bespoke than the aforementioned versions/skins of Android.

But that isn’t to say it’s without merit or utility.  As mentioned, the battery saving options are without a doubt an example of what software tweaks and features can bring to the table.  However, Samsung’s TouchWiz still feels a bit clunky and is probably the biggest bottle neck in terms of the handset’s all together speed.  It just feel a bit arduous, if not laborious to chug through the menus, make a phone call, or even change some basic settings on the phone. In case any of these phones didn’t meet your expectations, we still have decent option – read the Samsung Galaxy S7 Edge review.

Look.  The handset space is becoming a much more even playing field.  First there was the iPhone, a groundbreaking device that shattered all sorts of standards with its slick, easy to use touchscreen interface.  Android attempted to follow suit and while they initially failed, the OS eventually caught up, albeit sometime later.

So where is there to go from here?  Evolutionary.  Which is to say not revolutionary.  And that perhaps best sums up the Samsung Galaxy S5.  So until there is a paradigm shift, like there was with the iPhone, disappointment is almost inevitable.

The Galaxy S5 is not groundbreaking, earth shattering, or really all that remarkable in look or feel.  It’s not a huge leap over the Galaxy S4 and nor is that much better than the now 8 month old iPhone 5s (save for the display size).  What it is good at, is being a good phone with the potential for excellent battery life, speedy performance – minus the TouchWiz UI – that is perhaps living in the shadow of its gimmicky features, such as the fingerprint reader and heart rate sensor. 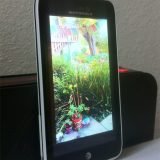 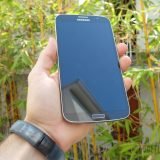 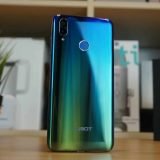 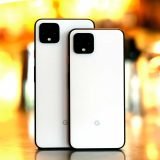 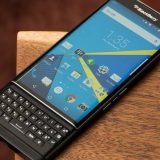 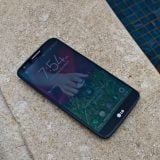