The Samsung Chromebook Plus, although being the older version of the Plus V2 still stands out as a great chromebook to this day. With an included pen with a silo to store it, and a responsive touch display, the Plus is a great chromebook to take advantage of the android apps featured in chromebooks today. And although it’s powered by an Intel Celeron processor, the Samsung Chromebook Plus still keeps up with an impressive battery life and a high resolution display, to be the best chromebook in this price range. 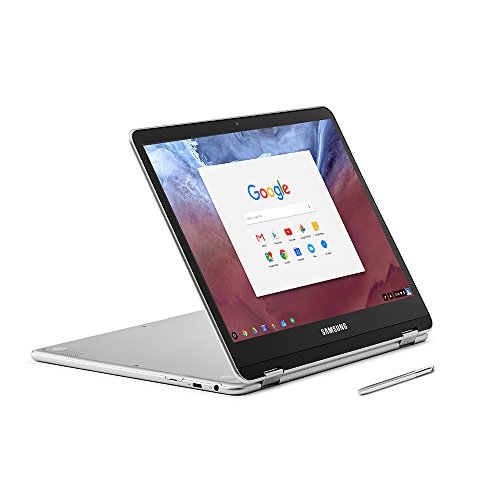 Having a simple yet elegant design the Samsung chromebook Plus allows you to easily carry out your day to day tasks through the use of the chrome os. Keep your laptop safe by making sure to give Mezzi LuxSlim aluminum laptop case review a read. Powered by an Intel Celeron processor and 4GB of RAM, it surpasses many of the cheaper chromebooks in terms of performance and keeps up with more premium chromebooks with a good battery life. And so, all of that paired with an amazing 2 in 1 convertible design along with an included pen, the Samsung Chromebook Plus is one of the best mid range chromebooks out there.

Powered by 4GB of RAM, the Intel Celeron 3965Y processor clocked at 1.5 GHz and the Intel HD Graphics chipset, the Samsung Chromebook Plus works pretty great, allowing you to work on almost a dozen tabs without any form of latency. It isn’t faster than the Google Pixelbook, but considering the price, it provides more than sufficient performance for anyone looking to get light tasks done at school or work through the chrome operating system. For a faster system, the Samsung Chromebook Pro is a better choice with its intel core processor.

Moreover, the Chromebook Plus comes with a 12.3 Inch IPS display which has a resolution of 2400 x 1600 and a 3:2 aspect ratio. The display has a noticeably higher resolution than its successor, the Samsung Chromebook Plus V2, but what stands out here is the 3:2 aspect ratio. This is great for those who surf the web a lot or like to read articles on their laptop. But do keep in mind that this will cause letterboxing when watching videos that were designed to be seen in a 16:9 aspect ratio. However, the display itself is great with a brightness of upto 400 nits, making the images on the screen more bright and clear.

The keyboard on the Samsung Chromebook Plus is good but not necessarily great. Apart from not being backlit, it also has a slightly shallow key travel which would need some getting used to for typing. For anyone who needs a backlit keyboard on a chromebook, the Asus Flip C302 is a great option worth considering for a similar price. As for the touchpad on the Samsung Chromebook Plus, it is quite responsive and accurate as well. Moreover, with the included pen, you can just use the touchscreen whenever you want to, making it much easier and enjoyable to use android apps like those for taking notes as well as playing google play games. And although, the tablet mode for the Samsung Chromebook Plus isn’t necessarily bad, the feeling of constantly pressing the keyboard on the back may get a bit uncomfortable. If it’s too much of an issue for you, the similarly priced HP Chromebook X2 is a great pick with its detachable screen.

Finally, the Samsung Chromebook Plus has a good battery life of about 8.5 hours which however falls behind that of the Asus Chromebook Flip C302. But it’s still enough to get you through most of your day without needing to plug in. As for the storage, the Chromebook Plus has about 32GB of storage which, although isn’t a lot, can be covered by the cloud storage of 100GB for free for 2 years and also an SD card.

Measuring to be 0.5 by 11 by 8.7 inches and weighing just about 2.34 pounds, the Samsung Chromebook Plus is much lighter than both its successor and the HP Chromebook X2. This makes it extremely travel friendly, and a great companion for whenever you’re one the go. The device itself has quite a simple design with plain colours, which itself complements the business franchise of it.
When it comes to ports, the Samsung Chromebook Plus has two USB-C ports, one on the right side and another on the left, a microSD card reader and also a headset jack. It’s pretty limited so you might need some adapters to connect other devices.

Samsung Chromebook Plus Wrap Up