If your Best Electric Bike has fat tires, you’ll be happy to hear there is a Bike Rack for Electric Bikes that handle bigger tires without an adapter. We suggest the RockyMounts Backstage Swing Away Hitch Rack. It can carry two bikes at a time and swings away from your vehicle for easier access to your trunk. 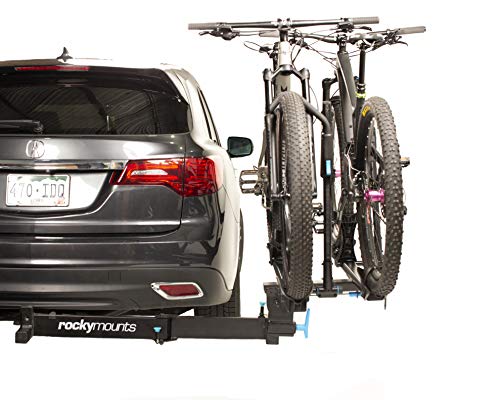 The RockyMounts Backstage Bike Racks don’t just handle two bikes with ease; you also get full access to the rear storage of your vehicle, thanks to its 180-degree swing-away feature.

The RockyMounts Backstage won’t disappoint with its strength. Being built mainly of metal and thicker where it counts most, it can handle up to 120 lbs, 60 lbs allotted to each bike. The only plastic you’ll find on this bike rack is the wheel trays and straps. Its black finish also lends a hand to some scratch resistance. The Hollywood Sport Rider handles a little more, 80 lbs per bike instead. If you have various bikes, try the INNO NH120 that is also compatible with both 1.25 and 2-inch hitch receivers.

Right off the bat, the RockyMounts Backstage gets bonus points for handling two bikes rather than one. However, it’s limited to 2-inch hitch receivers, though you can get your hands on a hitch extension. It handles a wide variety of bikes, from 20” to 29” diameters, and bike tires as big as 5 inches—and yes, that includes fat bikes. Its 180-degree swing away feature is particularly nice, considering it lets you swing the rack to the side for easier access to your trunk.

Sadly, the RockyMounts Backstage Two Bike Rack doesn’t have any battery-related features. It doesn’t charge nor have a battery of its own. To be fair, it isn’t a typical feature; in fact, you should remove your e-bike’s battery before hauling.

To prevent any wobble, the RockyMounts Backstage uses a threaded hitch pin. The Thule T2 Pro XT uses a far superior system with a kind of wedge, but the Backstage Bike Rack does the job well enough. Its cable lock is particularly thick and long enough to wrap through the frame and rack.

The biggest strike against the RockyMounts Backstage is it being limited to just 2-inch hitch receivers. If you’re out of luck, then check out the Thule EasyFold XT 2. But if that isn’t a problem, you’re getting a good deal here. Its swing-away feature is unique enough to warrant a slightly higher price.

Aside from the initial limitations of the 2-inch hitch receiver, the RockyMounts Backstage does very little to disappoint. It’s strong, versatile, and unique. To gain access to your trunk entirely and without tilting the bikes in weird ways, is something you never realize you needed until you’re in front of it.