Are you looking for a new projector for cheap for your shiny new home theater setup? Well, look no further. The QKK Mini Projector is here to serve you. Even on a screen as large as 120”, the picture quality stays pristine. You don’t see that on too many mini projectors available at this price. That’s what makes it the best projector for artists to buy in this price range. 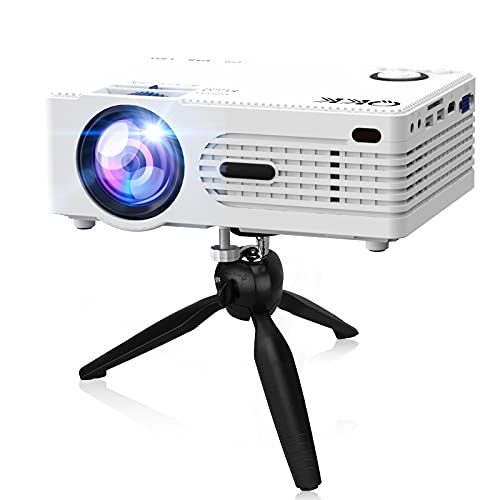 The QKK Mini Projector comes in at just above $100 and features Full HD playback compatibility right out of the box. Yes, it doesn’t have 1080p as its native resolution, just like the AuKing Mini projector. But still, a higher bitrate 1080p content looks much better on a low-resolution small projector than its lower bitrate counterpart.

As mentioned before, it does have support for Full HD (1920x1080p) playback. But there are conflicting pieces of information about the native resolution of this QKK projector. In some places, the manufacturer states that the native resolution is 1280x720p; in other places, they mention 800x480p. Whatever the case may be, full HD content actually looks pretty good on this portable projector, even over long throw distance on a larger screen. If you need a native full HD projector, go for the Epson Home Cinema 1060 instead. If you are working on a budget, try the Vankyo V600 projector, it is very cheap, has native 1080p, and has a decent input selection.

Once again, the manufacturer touts a 5500 lumens lamp in this projector, which is most probably not true. But it’s sufficient even for outdoor movies. If you play video games or use a TV stick of some sort to access paid streaming services, it’s always a better idea to go for a reputed brand. The ViewSonic 1080p Projector is a much better option in this case.

If you have connected your device using an HDMI cable, or if you are trying to play a video file on an SD card, or through any of the two USB ports, by default, the aspect ratio is set to 16×9. Make sure to change it to “Auto.” The tripod stand and even the keystone adjustments are very flimsy.

QKK says that the lamp apparently lasts for 50000 hours. But the manual places the lamp life at 40000 hours. Whatever the case may be, if you only use it a few times every week (e.g., for a movie night), the lamp should last for a long time.

You can probably find similarly specced projectors for cheaper with free shipping on amazon.com. But, not many of them can project content with at least somewhat usable picture quality on a large projector screen. And tiny freebies like the included remote control, HDMI cable, tripod stand only add to the value even more.

The QKK Mini Projector is definitely not the best video projector out there, and it’s not trying to be. At just above $100, the tradeoffs are perfectly acceptable.