There’s so much pollution outside nowadays, to the extent that if you don’t pay enough attention to your surroundings or maintain a high level of hygiene, you could very easily catch an unwanted disease. Air pollution for example may lead to you catching a respiratory infection, but this is something you can help prevent by purchasing an air purifier. Since there’s a tendency to do a lot more travelling in your car, it be an even smarter idea to get a car air purifier. If you’ve never bought one before, you might not feel the need to splurge on the best air purifier you can get, so a decent option to start out with would be the Pure Car Air purifier. It might not be the best car air purifier around, but it’s still worth a good look. 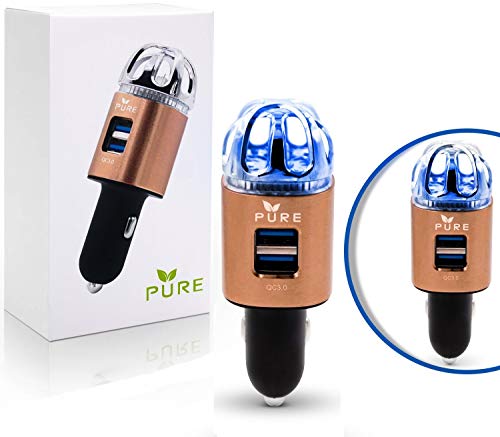 The Pure Car Air Purifier is probably one of the most reliable air purifiers for anyone who would want one they can get on a budget, and one that also features two quick charge USB 3 ports to power other devices.

The Pure Car air purifier isn’t as complicated as the Iqair Atem Car air freshener in terms of functionality, as it doesn’t feature a HESA or HEPA filter, nor does it have a carbon filtration system. It is simply an ionizer that works by releasing negative ions into the air, which then attach to any cigarette smoke, dust pollen or mold particles so as to weigh them down. This works well to get rid of any bad odours, and improving the overall air quality inside your car.

There’s one particular thing that’s unique about the Pure Car Air Purifier, and this is that it supports quick charging through its USB 3.0 port. This makes it power up to 4 times faster once you plug it into the 12V cigarette lighter port in your vehicle. Unlike most car air purifiers, the unit also has a dual USB port that you can use to charge other devices such as your phone, and this makes it quite versatile in the ways that you can use it.

The lack of HEPA filters might mean that the Pure ionic air purifier may be unable to filter the smallest harmful particles from the air, but it functions really well as an odor eliminator. The air freshener won’t be able to show you the air quality of the air around you like the Wynd Plus Smart Personal Air Purifier is able to, but on the flip side, the Wynd Plus also doesn’t have any USB ports as well, so there are pros and cons despite what you pick as your option.

Since there’s nothing that needs any replacing, The Pure car ionizer should ideally last up to 12 months of use, after which you’ll just have to get a new one once your old one is no longer effective. Unlike the PHILIPS GoPure Compact 200, the Pure car purifier also features a 30 day money back guarantee, so you’ll be able to return it in case it’s got an issue. Also worth mentioning is that it’s got a limited 1 year warranty, so you’ll be able to reach out to the manufacturer in case there’s a problem with your unit.

With an ability to produce up to 5.6 million negative ions per cubic centimeter, the Pure car air purifier is easily one of the most efficient air purifiers in the market, and will only require only up to 7 days of use so as to completely get rid of any pollen mould or bad odour that may be in your vehicle. It’s air purification process is fairly swift, and although it might not be the best car air purifier around, it’s still pretty reliable, and doesn’t require any maintenance.

If you’re thinking of buying a nice little gift for your husband or boyfriend, the Pure Car Air Purifier would be one of the best car air purifiers to get him. It’s got a matte black color which gives it a slick clean design, and a blue LED light to provide a little bit of illumination inside your car.