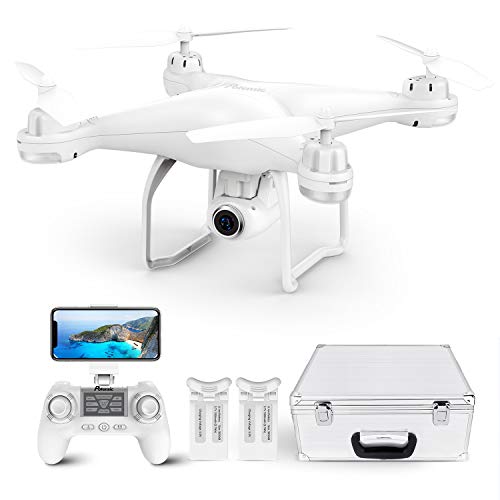 For a budget drone Potensic nailed all the right details. For starters, it comes with a crisp 1080p HD WiFi live video camera. It isn’t 4K like the Ruko F11 Pro is, but 1080p is still ideal for image and video quality—better than SNAPTAIN S5C’s 720p camera. This pairs nicely with its Altitude Hold feature, keeping it steady even against high windows even at high altitudes. This is especially nice considering its control range can reach as far as 980 feet in any direction.

Where the Potensic T25 FPV RC Drone falters is with its batteries. A single battery lasts 7-9 minutes. You get two for a total of 14-18 minutes, but still isn’t great. It’s enough to get a few really great shots or a video or two.

There are a few essential design choices that make the Potensic T25 stand out above the rest. For starters, it was given a 9-axis gyro, making it easily withstand strong winds. On top of that, it’s smart enough to remember where its take-off point was. When its battery is low enough, Dual GPS Return Home will kick in, and it’ll go back to its take-off point. The drone itself is built pretty sturdy with hard plastic. Lights around the propellers make it easy to spot the drone in darker situations. The controller itself houses several key features such as one-button take-off and additional flight modes such as headless mode and altitude mode.

To review Potensic T25 GPS Drone FPV RC was a joy. Aside from poor batteries, the Potensic T25 Drone still has some great value here—especially for beginner fliers, unlike the Holy Stone HS700D. A large portion of that value is what the drone comes with, aside from its performance. You get a nice tough aluminum case, a remote control with intuitive buttons, and several replacement parts for the landing gears, propeller blades, and propeller guards.

Even if the batteries are poor, the drone is cheap enough that an extra set of batteries can be thrown in there without breaking the bank.

For a beginner flier, the Potensic T25 is going to put in some serious work, and it’s built for it. Its 9-axis gyro makes handling winds a breeze, not to mention an intelligently designed remote controller and oodles of additional features like various flight modes and its Return Home function. If you’re on the fence because of its batteries, remember: regardless of what drone you purchase, you’ll want extra batteries anyways. And the Potensic T25 batteries are very affordable, like the drone itself.