Home theater possibilities are greatly expanded by ultra-short throw (UST) projectors which can beam a large image size while being positioned at the front of a room inches from the screen. No longer needed are specialized rooms totally free of ambient light that are large enough to allow for the projector location several feet away from the screen at the rear of a room in order to have sufficient throw distance to display an immersive image size.

The Optoma CinemaX P2 4K Projector is a UST projector that displays a large image with sufficient brightness such that ambient light control is less problematic, has multiple interfaces, supports HDR10 and HLG, is easy to set up, and has an integrated audio soundbar. The Optoma 4K Projector is featured in GR’s Best Laser Projector buyer’s guide of UHD home projectors. 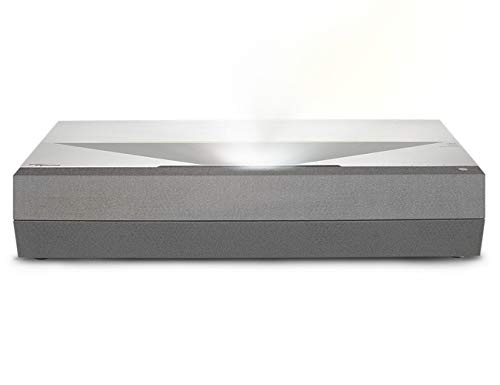 The Optoma 4K Projector, or more precisely the Optoma CinemaX P2 Smart 4K Projector, is a super bright ultra HD short-throw projector that delivers an immersive big-screen viewing experience placed inches from the screen, plus being super smart through its compatibility with Alexa, Google Assistant, and IFTTT support. It could be one of the best Optoma projectors.

The Optoma CinemaX P2 4K Projector, a follow-on to Optoma’s P1 model, performs very well, throwing crisp images that are detailed and vivid. Its 4K UHD (3840 X 2160) resolution uses a DLP XPR micromirror chip combined with good lens shift optics yields outstanding picture quality. The color gamut of the P2 is 120% Rec.709 (Recommendation ITU-R BT.709), an extension of the gamut resulting in visible accuracy and saturation, especially deep reds, but is still 85% of DCI-P3 vibrancy. There are ample physical connectivity options with three HDMI 2.0 inputs (two rear, and one to the side), two USB ports, an RJ-45 Ethernet adapter, a 3.5mm audio jack, and an optical digital audio output. Also integrated Wi-Fi connectivity as well. While the CinemaX P2 4K Projector is HDR10 compatible, HLG support is limited to USB input sources. There are no controls on the box itself (only a power button and status LEDs). All functions are managed using a brushed metal remote control that connects via Bluetooth so it’ll work from anywhere without needing line-of-sight to the projector, and the remote has a battery built-in meaning that it needs periodic charging via USB. The remote has an “air-mouse” feature that’s useful for working the integrated web browser, and a conventional navigation pad as well. The Optoma 4K Projector includes “Smart+” features such as compatibility with Alexa and Google Assistant, extended by IFTTT interoperability. There is also an “Optoma Marketplace” (using the Android-based Aptoide platform) making streaming apps available, although many user comments say streaming through a media player provides better picture quality and resolution. Optoma does have an interesting TapCast app for screen mirroring and casting from a mobile device to the P2 projector, as well as casting whatever’s being projected back to your iOS or Android device. The screensaver of the Optoma 4K is a framed curated exhibit of animated digital art by emerging artists. There is also a Gaming mode setting that increases the internal refresh rate, but even with this enabled some serious gamers found the input lag of the P2 to still be too high and unsuitable for certain game titles. The front panel of the Optoma 4K Projector is a stereo soundbar system with two 2” aluminum cone stereo speakers, and two 2.75” paper cone woofers housed in ported chambers, powered by a 40-watt amplifier. Pretty good sound integrated into the Optoma 4K, and with a variety of audio presets it may be all that’s needed. For an even fuller theater sound experience, simply add an external subwoofer.

The Optoma 4K Projector is rated at 3,000 lumens, generating light from a single blue laser that then feeds a yellow phosphor wheel and an RGBRGB color wheel to generate the primary colors, skipping a yellow segment (RGBY) to boost brightness. This may cause some colors to potentially appear more saturated when color control is set to a minimum. The Optoma 4K Projector works well in a smaller room where it might otherwise be challenging to have such a large image displayed. The P2 is certainly bright enough to overcome some ambient light, but really excels in darkened room environments. The P2’s contrast ratio of 2,000,000:1 is an improvement over Optoma’s P1 UST projector and comparable with other UST projectors, yet below the ultra contrast ratio of the VAVA 4K projector. The Optoma 4K does offer laser brightness settings, reducing light output down to 50% brightness in 5% increments, or by using any of three Dynamic Black settings that deepen black colors on dark content.

The Optoma 4K Projector projects image sizes from 85 to 120 inches (diagonal) with a throw ratio of 0.25:1 which is not as short as LG’s HU85LA, and which really means you’ll need just a bit more distance from the wall. For an 85 inch image, the back of the projector needs to be 5.7” from the wall, and a little under 15” from the wall to get a 120-inch image size. Physically the Optoma 4K box is just under 15” deep, so filling a 100-inch screen size means the front edge of the P2 sits about 25” out from the screen, resting about 15” below the bottom edge of the screen. The Optoma 4K has a slick geometric correction capability through their SmartFit app which uses the camera on your smartphone (iOS or Android) to snap the projector image into place. However, based on user feedback this appears viable only on a fixed frame screen, and not workable on pull-down screens. Geometric correction also worsens input lag for gaming. There are six color mode settings for 1080p SDR content, and dedicated modes that activate for HDR10 or HLG high dynamic range content (ultra HD). There are three “PureMotion” frame interpolation settings available in all modes that are intended to smooth motion such as judder on camera pans. This is probably useful for sports, but beware of the dreaded ‘soap opera effect’ on other content. There’s even a 3D mode that uses DLP’s 3D Link system (no glasses supplied with the projector). All modes have the same access to color calibration, a full RGBCMY palette, and saturation management capability. Bright mode has an overly green bias unsuitable for most viewing according to user comments. Some other customer comments note that setup instructions are inadequate, and that getting their Optoma 4K Projector properly adjusted required calling Optoma tech support multiple times.

As with many UST projectors, the Optoma 4K Projector is an unobtrusive (yet stylish) box sitting at the front of the viewing room. There’s some noise from its cooling fan, but not so much that it’s noticeable over a soundtrack. Optoma rates its laser lamp life at 30,000 hours (not the amount of time until failure, but rather the time until the laser engine’s brightness is reduced by 50%). The unit is well built and stylish in a white color scheme. Optoma offers a 2-year warranty for their CinemaX P2 projector.

The Optoma CinemaX P2 4K Projector list price is less than their prior generation CinemaX P1 projector, but more than the VAVA 4K projector. It’s a reasonably good choice and its performance is very good. Still, it’s possible to go with less spend for the VAVA or a bit more spend for an LG HU80KA 4K UHD. Although, the LG HU85LA is a great UST choice, assuming you want to stay with a UST projector. Alternatively, you could obtain equivalent projected picture quality (in less constrained room environments) using longer throw projectors where you can spend far less for an Optoma UHD60 4K projector, or even more on an Optoma UHZ65. There are lots of choices, innovations, and trade-offs in the projector market. You can also try the ViewSonic PX747 projector which is one of the cheapest home theater projectors that offers true native 4K resolution.

The Optoma 4K Projector delivers outstanding picture quality, performing outstandingly well in projecting a wide variety of content, from movies to live-action, in a variety of room environments. Its ultra-short throw lets it sit at the front of a viewing area and makes ceiling mounting unnecessary. With great image quality and good sound quality, the Optoma 4K Projector can instantly turn virtually any room into a home theater.