The OPOLAR Desk Fan has adjustable rubber feet so you can place it easily on surfaces, including those which may be uneven. It provides a strong airflow, but a slight whirring noise may be irksome to those who like complete quiet. You can also look at the best desk fan to see other fans which may be right for you! 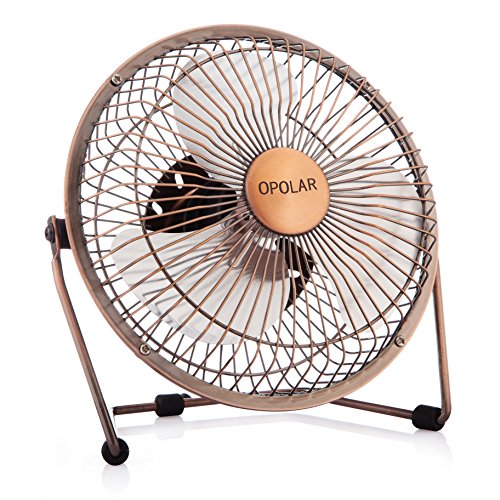 The OPOLAR Portable Fan is a quiet fan, making only about 40dB of noise which is akin to a whisper. The sturdy metal frame does a good job protecting the blades from damage, and the attached four foot USB Cable saves you from having to bring one around with you with you while carrying the fan.

The Fan OPOLAR is a 6 inch table fan which produces airflow up to 3.7m/s. It’s a USB Fan, not a battery fan, but at least it comes with the USB Cable attached so you won’t have to bring one around with you. Still, we wish an OPOLAR Battery Operated Clip Fan was an option too, just for the versatility.

The OPOLAR Mini Fan is built with a sturdy metal frame allowing you to expose it to the elements without much worry and resembles the popular Holmes Blizzard Fan. The rubber feet on the OPOLAR Fan are also adjustable so you can place it on your desk or nightstand however you see fit. The blades, unfortunately, are made from plastic, but the metal frame should be able to protect them without much issue.

The OPOLAR USB Fan adopts a brushless motor which reduces the noise the best selling fan makes to about 40dB. For reference, 40dB is considered to be a whisper-level noise. But by the company’s own addition, there is also a slight whirring noise that you can barely hear. It may cause some nice background noise, but for others it may be too annoying. We’ll leave it up to you to decide. Check out the Vornado Pivot if you do want something a little quieter.

The OPOLAR Portable Fan is powered by an almost four foot USB Cable that is compatible with computers, a power bank, or an independent generic power adapter. Check out the Fancii USB Fan to get an idea of what other USB Fans are like. And since it’s a USB Fan, the OPOLAR Portable Fan will save on energy costs by drawing energy from the computer instead of an AC Unit or electrical outlet.

The OPOLAR Portable Fan comes with a 1-year warranty. It’s available in a variety of colors, such as blue, bronze, and pink, which is a bold but welcome declaration considering most fan colors are more subdued tones like gray or a light silver. It also means you’ll have more room to match it with the decor of your home too.

The OPOLAR Portable Fan, being a USB fan, will help you save on energy costs by not needing to be powered at an outlet. The company’s estimates you’ll say about 95% using the fan! The blades are made of plastic though, and while the metal case should protect it, we still wish they hadn’t skimped on this. It’s probably where the whirring noise comes from.