As is probably obvious, the Olympus Tough TG-6 is built for anyone that wants to take pictures in a wide array of conditions. The camera is waterproof, dustproof, shockproof, crushproof and freeze proof and this allows you to take it pretty much anywhere. It also supports 4K video, and has a nifty pro capture mode that allows you to save photos just before and after the shutter release is pressed. The TG-6 is an upgrade from the TG-5, and it happens to be a compact camera designed to suit all your outdoor needs. As a matter of fact, we think it has just enough to be the best point shoot camera, but you can go ahead and read this TG-6 review to be the judge of that. While you’re at it, give our Sony Cybershot T110 review a read to throw it into the running as the best point and shoot camera. 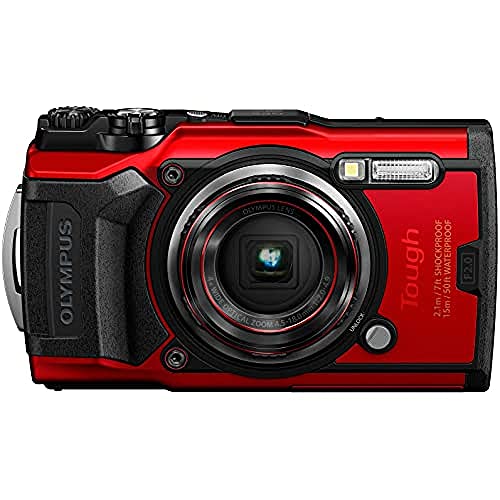 Made for adventure, the Olympus Tough TG-6 is the best camera choice for underwater shooting and other forms of outdoorsy photography that you’re likely to participate in that might include harsh conditions. The camera features a 12 Megapixel sensor, a 4x optical zoom lens and a 3-inch LCD display that doubles up as your viewfinder.

The Olympus Tough TG-6 camera has all it takes and more to deliver amazing picture quality even in the harshest environments. With a 4X optical zoom though, the camera is unfortunately dwarfed by the Nikon Coolpix 500 at 40X. Despite that, the waterproof camera allows you to set the shutter speed as fast as 1/500 of a second, and has a pro capture mode that works to help you get the perfect shot by shooting just before and after you hit the shutter button. The camera also has 5 shooting modes that are best suited for underwater photography. They are Snapshot, Wide, Macro Mode, HDR and Underwater Microscope. The only new underwater shooting mode here is the latter, as all the other 4 were also present on the TG-5. Video capture is also possible underwater thanks to Movie Mode.

The robust design of the Olympus TG-6 camera allows it to withstand all the things that you wouldn’t want to happen to your smartphone. The camera comes in either red or black, and has a very solid build quality. Most would argue that it’s 3-inch LCD screen is small, but then again its thickness allows it to withstand a lot of falls without even one crack. Unfortunately, the display is also not a touchscreen like that of the Canon PowerShot G7. Aside from that, divers that want to go deeper than the 15 meters the camera allows can get underwater housing for the TG-6, which stretches that limit up to 45 meters.

As you’ve probably seen thus far, the tough camera has a lot of features that support shooting underwater. It comes with underwater shooting modes that are depth specific to the white balance modes required, and Aperture Priority Mode that allows the camera to adjust the shutter speed to get the correct exposure. The camera can also do focus stacking, and its ability to do so is complemented by its close focusing distance. Wide angle shots are also possible with the TG-6, but the image quality can be greatly improved through the use of an accessory lens. The camera also allows you to shoot RAW to capture all the image details & allow for enhanced editing, but it doesn’t have NFC like the Canon PowerShot ELPH 360 HS for easy sharing.

The addition of the Underwater Microscope Mode is the only major difference that sets apart the TG-6 from the TG-5. This doesn’t really make it much better than the TG-5, but if it’s a feature that you might want to tinker with, then it’s enough reason to go with the TG-6.