Segway ES4 E Scooters is considered one of the best electric scooter for commuting simply because of its exceedingly fast charge time. You won’t need to leave it on overnight to charge and can get away with charging it right when you get home and unplugging it after dinner which saves the battery from overcharging and thus keeps it healthy. 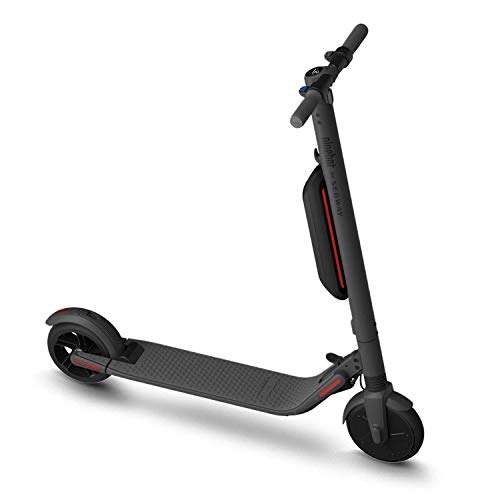 Why We Like It – Ninebot by Segway Kickscooter ES4

The Ninebot by Segway Kickscooter ES4 is one of the fastest scooters Segway has produced, boasting a top speed of 19 MPH. The dual, hybrid braking system allows it to stop quickly and safely and the 19 mile travel distance is probably the most range a Segway electric scooter has to offer.

The Segway Ninebot Kickscooter ES4 comes with a top speed of 19 miles per hour which is on the high end of speeds for scooters in its class like the Xiaomi Mi M365 or its cousin, the Ninebot Segway ES2. Unfortunately, it’s hill-climbing capabilities leave a little to be desired as it’s only able to climb a 60 meter, 10% incline hill in about 36 seconds. Let’s emphasize that it can climb hills, just at a slower rate.

The Segway Ninebot ES4 Electric Kick Scooter contains a dual braking system. It has a front regenerative brake and a rear foot brake. Not only will they work in tandem to make you stop quicker, but the regenerative brake will help to distribute power wherever it’s needed. The scooter also contains a front and rear light, which both act as headlights, for added visibility if you find yourself travelling at night a lot. The tires are airless, which means you’ll never have a flat, and are 8.5 inches. If you prefer chunkier tires, check out the Razor Ecosmart Metro Electric Scooter Review.

Segway Ninebot ES4 Electric Scooters comes with an external battery which not only gives a boost to speed, but to range as well. Although it’s not the highest we’ve seen, the scooter can travel an impressive 19 miles on a single charge. And speaking of charge, the scooter does have an excellent charge time of only 3.5 hours, similar to the Glion Dolly Foldable Lightweight Adult Electric Scooter.

The Ninebot ES4 Folding Electric Kickscooter is, you guessed it, foldable for easy carrying and transportation. At 31 pounds it’s a bit heavier than other models in the ES series, but it’s still on the lighter side compared to other scooters in its class. It also has the ability to hold up to 220 pounds of weight which makes it perfect for adults and teenagers alike.

The Ninebot ES4 Kickscooter has a mobile app that you can use to access many additional features like the cruise control. Available for iOS and Android, the app also gives you plenty of other information, such as instructions on how to fold the scooter and how to access the three driving modes. The scooter also has a lock motor feature which acts as a great deterrent against theft.

The Segway Ninebot Kickscooter ES4 boasts bright Led headlights for added security at night and a lightweight design should you have the need to carry it onto a crowded train or bus. It would be nice if it could take hills a little bit faster, but it can still take them. If you’re okay with climbing hills a little bit slower, then this is a great choice for a commuting scooter.

Bottom Line
Reader Rating0 Votes
0
What We Liked
What We Didn’t
8.2
Expert Rating

10 Best Electric Scooters For Adults in 2022

Where is it Legal To Ride An Electric Scooter