The MSI GF63 THIN 9RCX-818 is most definitely not the best laptop with i7 processor and the best laptop out there, quite the contrary, in fact. But a few good aspects and the low price tag might make it worth it for a few select groups of users, especially parents who just want to buy their kids an entry-level machine to play games on. 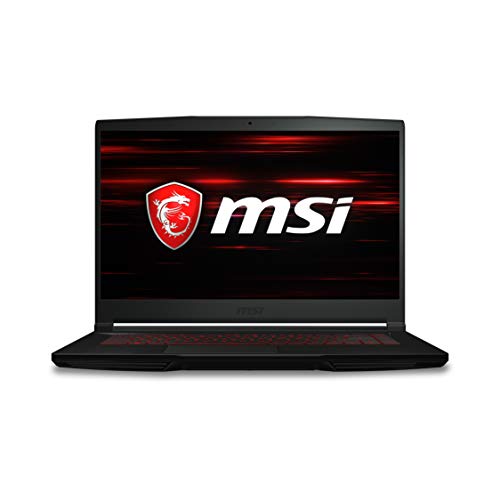 Many big issues aside, the MSI GF63 THIN 9RCX-818 does have a few good aspects about it. It comes with a capable processor and features good upgradability options if you need to upgrade in the future. And audio-wise, the built-in AMP is pretty good.

As we mentioned before, the Intel Core i7-9750H six-core processor is very much capable of handling demanding workloads. But, if you are buying this laptop to play games on it (which most people would be as it is marketed as mainly a gaming laptop), prepare to be disappointed. The GTX 1050 Ti inside is almost a three generations-old GPU, a lower-end one at that. You might get around 60FPS on older AAA games by turning down the settings (a lot), but you can forget about playing modern games at the same frame rate at 1080p, especially something like Cyberpunk 2077.

The battery life here is just terrible, to say the least. MSI touts “7+ hrs” of battery life on this thing on their marketing materials. But that statement couldn’t be less true. With normal use, you’d be lucky to get something around 2-3 hours out of it. And you can pretty much forget about gaming on the go as the laptop probably won’t even last 40-45 minutes after a full charge. You’ll always have to plug it in while gaming.

Ports selection isn’t very expansive either. In total, you get about three USB type-A 3.0 ports and one type-C port. The laptop is very big, so there are more than enough places to add more USB ports or something like an SD card slot in, but MSI, for whatever reason, decided against it. You do get an ethernet port, and having the headphone and mic jack separated is a nice touch. And don’t worry, you do get an HDMI 2.0 port in the back. If not having an SD card slot is a dealbreaker for you, you’re gonna have to settle for the HP Spectre x360 13t instead.
The RAM size of just 8GB is going to be a problem in the future. But fortunately, you can upgrade it easily up to 64GB.

The metal chassis feels very premium in hand, but everything else kinda falls apart from there. The trackpad is subpar at best, and the tenkeyless keyboard is pretty bad too. The sharp edges of this laptop really don’t help to provide a good typing experience. And as much as MSI would like to advertise “Thin Bezel Design,” the chin and the forehead are very large and just ugly. Overall, it’s just a dated design that doesn’t hold up at all compared to other modern laptops. Even their own MSI P65 Creator comes with narrower bezels than the GF63 THIN 9RCX-818.

Well, this a section where this MSI laptop gets to breathe a little bit. The price over the last few months has dropped quite a lot. So it’s not really a bad value for money product anymore. Then again, if you spend just about $100 more, you can get the 1660 Ti variant of it, which is gonna be leagues better in terms of gaming performance.

Overall the MSI GF63 THIN 9RCX-818 15.6 inch gaming laptop is decent for its price. But, if you are not going to game on your laptop, the Microsoft Surface Book 3 is a much better option in our opinion.

Bottom Line
Reader Rating0 Votes
0
What We Liked
What We Didn't
8.6
Expert Rating