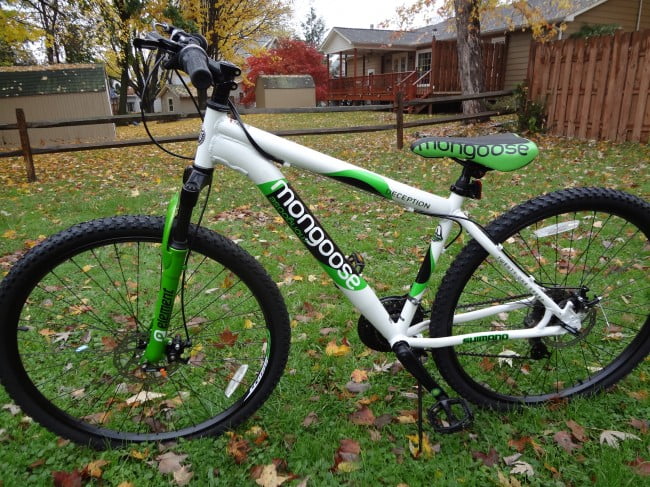 It’s another week, and time for another high-tech low-tech review!  Keeping with the theme of outdoor equipment that I started last week, we have the Mongoose Deception.  There’s a lot of people out there who are looking for a decent bike, but who don’t feel like spending a grand on a Trek, or a Dynamic (or multiple thousands on a Fuji).  These people are the ones who the Mongoose bikes are designed for – those who go into a big box store (a la Wal-Mart) and just want something either for casual use, or for fitness riding.  Unfortunately for them, the employees in those stores rarely know what the heck they’re talking about on most topics, so hopefully I can help you make a decision on whether or not this is a right fit. 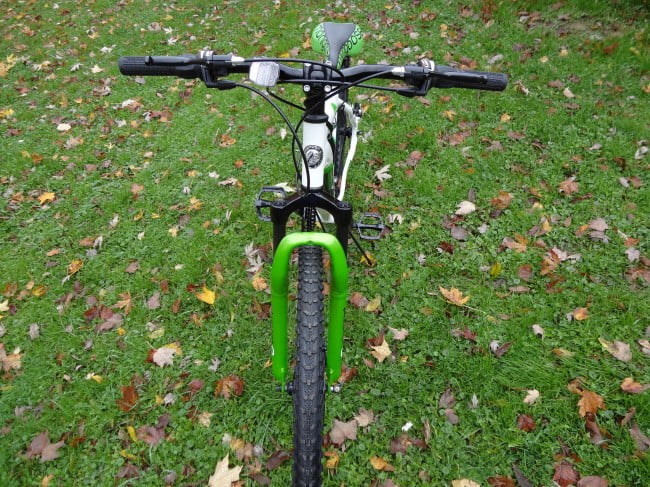 The PR rep offered to send the Deception to a dealer to have it put together, but as a more “hands-on” person, I opted to have it sent directly to my house and do it all myself.  Now, if you have the option for free assembly I usually suggest customers take it – but if you want to know exactly how everything goes together there’s no better way to figure it out than by putting it together yourself.  It’s not that difficult either, as the rear of the bike (including the gear and chain assembly) is already pre-assembled.  Really all you need to do is get the front wheel on, get the front handlebars connected, and get the seat set up (oh and the pedals need screwed in).  It took less than 15 minutes once I looked at the instructions. 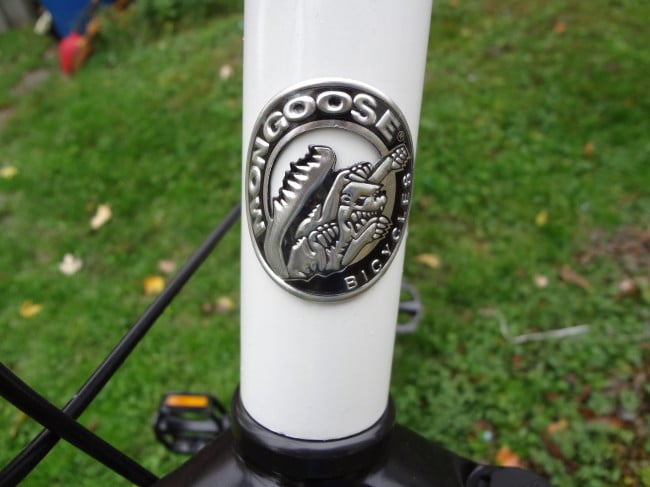 Speaking about the seat, the first thing you will end up wanting to change about the Mongoose Deception and really most ANY bike I’ve been testing) is the seat – it really isn’t very comfortable at all.  It’s an easy upgrade though, especially if you pick this up at Wal-Mart, because they have a few decent options for $20.  It’s really nothing against the bike – for some reason bike manufacturers just don’t like to put really comfortable seats on their bikes.  The next thing you’ll end up changing is the tires – while the ones that come included are perfectly fine, if you use this a lot on the road or sidewalk, you’ll notice they do cause a lot of friction.  For a casual rider or someone using this extensively for off-road riding though, that won’t be a real problem. 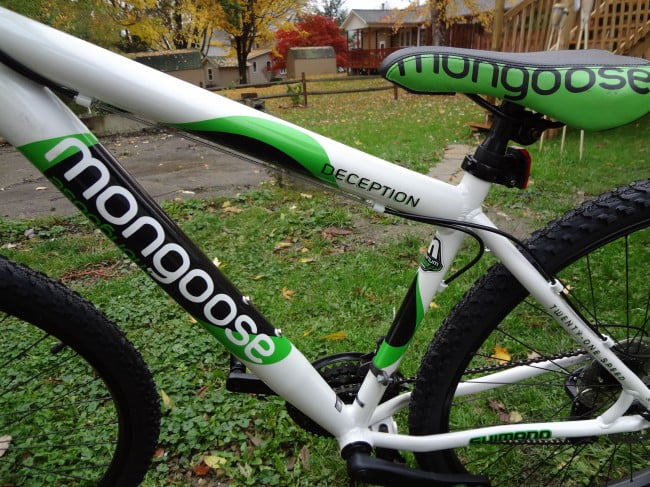 I really like the colors on it, as the green really stands out against the white, and the design aesthetics are quite nice.  It really feels nice and sleek – more so than some of the really high end bikes I’ve seen.  Something else that stood out to me (since I come from a machinist background) was the quality of the welds on the frame.  They’re all quite smooth and uniform, which really says a lot to me about the craftsmanship on the bike.  In fact, it’s not just the welds, but everything on the frame seems to be very high quality.  I weigh 270, and even when landing hard from some jumps the frame held up beautifully. 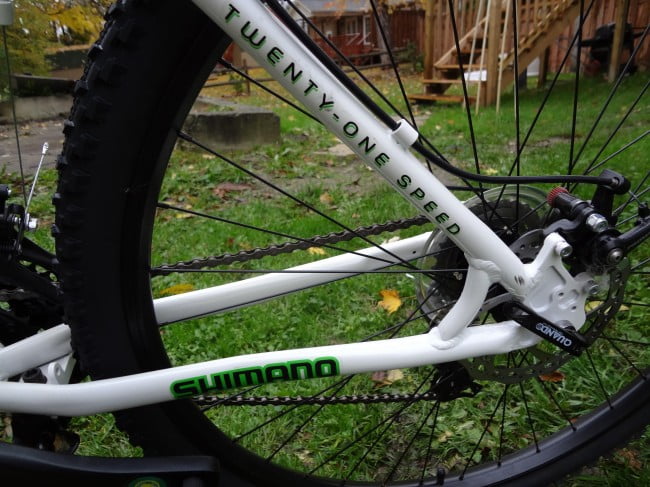 The brakes on the Mongoose Deception are a bit higher quality than I would expect from a $200 bike.  They’re disc breaks, and they work a lot better than the standard low end breaks that apply pressure to the sides of the tires while riding.  The only thing people need to understand, is that you may have to do some adjusting on the breaks to make sure they’re working as good as they should be.  It’s not like they’re hard to adjust or anything, but this is another skill you’ll pick up if you put the bike together yourself – I’ve heard stories from people who got bikes like this from a Wal-Mart and the people that put it together set the brakes completely wrong, so you’ll definitely want to check them out yourself. 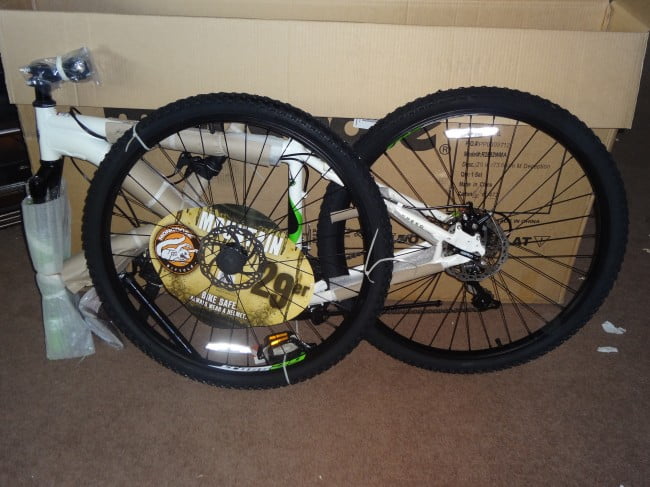 While the Mongoose Deception doesn’t have a real suspension system (again, it’s a $200 bike, what do you expect), but the front fork does have a shock absorber in it.  While it may not do much if you hit a big pothole, it definitely does the job when hitting your standard bumps from riding around town.  The Mongoose Deception also has 21 speeds, and the whole derailer/shifter system works great – however I did make sure to tune it up myself before riding it.  Again, I’ve heard stories about people getting them from Wal-Mart and the shifter not working properly – I’m not trying to be mean here, but that’s par for the course when the bike assembler also has to do ten other jobs.  Jack of all trades, master of none and all that.  You should either learn to do it yourself, or spend an additional $15 or so at your local bike shop to make sure it’s tweaked perfectly.

The Bottom Line: If you’re looking for a great bike that will hold up to most anything you’ll throw at it, this is a nice, low-cost option – just make sure you know how to set it up properly, or are prepared to take it to a professional before you actually take it on the road.

You can get the Mongoose Deception from Wal-Mart for $219.00 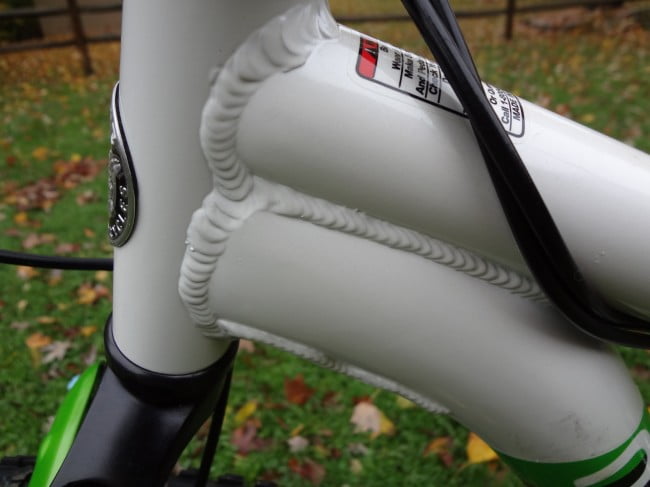 (UPDATE: In my haste to re-assemble the bike from my last trip – I didn’t have a bike rack then – I put the stem on backwards.  Pictures have been updated to fix that) 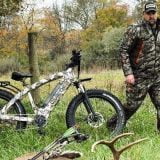 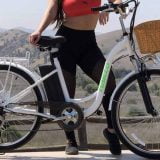 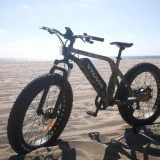 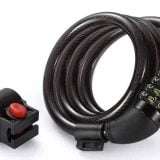 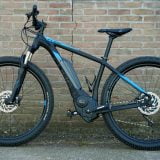 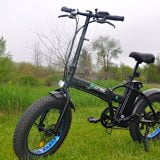