Released in 2018, the Misfit Vapor 2 is much easier to navigate thanks to the switch from their own proprietary software to Google’s wear OS. The smartwatch also comes with a number of new features that the original vapour didn’t have, and is much better built to keep track of your work out activities. The Vapor 2 has a 300 mAh battery that the manufacturer claims is strong enough to see it through two days of battery life on a single charge, and this is with the heart rate monitor, GPS tracking and NFC chip constantly activated. Hold on for this smartwatch review to find out what exactly the Vapor 2 has to offer, and whether it’s packed with enough features to be the best Android smartwatch for you. 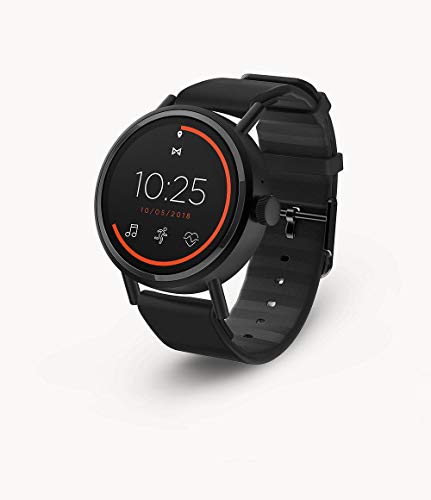 The Misfit Vapor 2 is a great budget smartwatch that has all the features that you would need for tracking your fitness. It comes equipped with a heart rate sensor, a battery life that can last longer than a day, and an option to go for either the 42mm or the 46mm case size variant.

Fitted with a Snapdragon Wear 2100 processor, the Misfit Vapor 2 won’t be as fast as the Samsung Galaxy watch, but you still won’t really notice any delays in its functioning. Google’s wear OS doesn’t take a toll on it, so apps like Google Assistant and Google Fit will run smoothly without any problems. The watch also includes NFC support to allow the use of Google Pay, and a water resistance depth for 50m, it’s probably a better choice compared to the samsung galaxy android smartwatch to use if you want to be able to jump in the pool with a smartwatch on your wrist.

Regardless of whether you get the 41mm or the 46mm model, the Vapor 2 comes with a 454 by 454 panel which is either 1.2-inches or 1.4-inches, making its display smaller than that of the ticwatch pro smartwatch. You can also get to choose from a number of different 22mm strands, but its stainless steel case is only available either in black or rose gold. Misfit decided to do away with the touch sensitive bezel that’s included in the original Vapor, so users will have to use its rotating crown, or its touchscreen display for navigation. On the Vapor 2’s underside you’ll find its heart rate monitor, which is capable of logging your heart rate 24/7, but because the watch doesn’t come with a sleep tracker, you’ll probably be removing it when you go to sleep.

The Misfit Vapor 2 offers tons of more quality than you’d get with the original Vapor, and retailing at less than $200, it’s a reasonable alternative for those who don’t want to go deep into their pockets for the Apple watch. Misfit maintains a high standard of quality with the Vapor 2, and with the 2-year warranty that comes with the watch, customers should be convinced of the same as well. If not, then there’s the Fossil Sport watch that also comes with the same 2 year warranty, making it a suitable alternative to the Vapor 2. The Garmin Vivoactive 3 GPS Android Smartwatch also comes with a 2-year warranty, though you’ll have to apply for it on their website to ensure full coverage for the second year.

If you’ve never really used any Android Wear/Wear OS watch before, there’s a lot that you could potentially be missing out on. The Google OS feels way easier and a lot more intuitive to use, and with support for third party downloads, you’ll be able to have a good amount of the apps that you use on your phone on your smartwatch as well.