If you’re shopping for microwaves, know that some models can do jobs similar to convection and conventional ovens while saving on counter space. The best microwave should heat food quickly and have a convection setting for angel food cakes and other baked foods. That said, you need to know the difference between microwave convection roasting vs baking for fantastic batches of food.

That said, you should compare a convection microwave to a standard microwave and an inverter microwave. Moreover, there’s a huge difference between microwave vs oven taste.

If you use a convection cooking method, do not crowd your food. The convection element will not be able to cook your food item evenly.

Microwaves with convection cooking settings can produce many common foods, just like a countertop convection oven. With roasting or baking, you’ll benefit from the circulation of heat from the oven’s fans. That said, convection roasting is the only mode with an active heating element. This means that each method meets a different need. For example, a convection roast is great for roasted vegetables and beef roasts. In contrast, convection baking is intended for baking potatoes, a casserole dish, or chicken wings.

The convection method uses fans for increased heat distribution, but there’s a difference between baking and roasting. Convection baking reaches its baking temperature with microwaves and airflow to cook your favorite recipes. Convection roasting uses the same airflow but adds an additional heating element to reach cooking temperature in a shorter period. If you’re interested in energy cost, check out our guide to energy use in microwaves vs. toaster ovens to get a rough idea of how baking and roasting might differ.

Never use metal tools in your convection microwave if you are using the standard oven microwave setting.

Can you put metal in a convection microwave oven?

You can use metal dishes in the kitchen appliance only if you use the convection microwave setting. Never use aluminum foil or metal utensils while cooking with standard microwave features.

What is a convection microwave oven used for?

In addition to standard microwave features, a convection microwave oven can make roasted meats, baked chicken breasts, baked potatoes, and many other cooked, roasted, or baked foods. Quite a few professional kitchens use convection to save cooking space.

How do I maintain my microwave convection oven?

To keep your microwave clean, make sure to wipe it out after each use. For stubborn stains, heat a bowl of water for three minutes and let it sit with the door closed for five minutes. The heat and steam should loosen any stuck-on food or stains.

STAT: According to a US Department of Energy survey, Americans making $100,000 or more per year use their microwave more than any other economic group. (source) 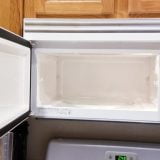 Microwave Trips the Breaker when Opening the Door 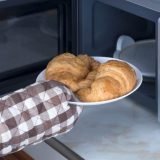 Glass vs Ceramic for Microwaves 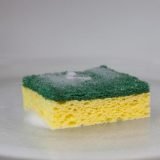 Should You Microwave a Sponge? Science Knows! 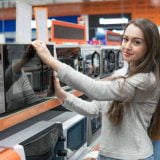 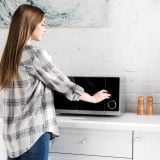 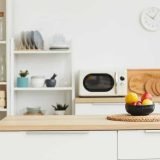 How to Cook in a Microwave