If you’re on the market for one of the Best Cool Wallets, the Michael Kors Passport Holder isn’t the most stylish, per say, but incorporates qualities of the Best Passport Holder into a fashion statement. Its leather and fabric combination is chic, while not ignoring the functionality of a wallet and passport holder. 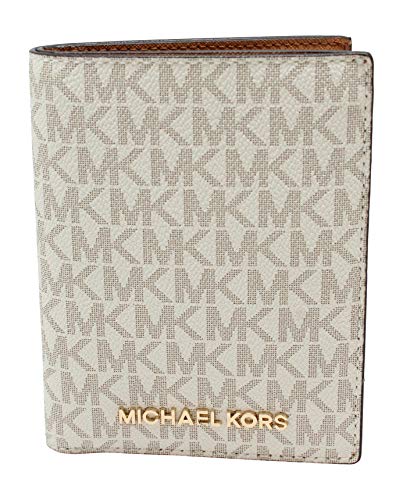 The Michael Kors Passport Holder is perfect for individuals concerned with the look of their passport, and yet still holds up to 7 different debit/credit cards and slots for petty cash.

There’s no doubt about it: the Michael Kors Passport Holder is very stylish. Its brightly colored leather is easy on the eyes, with a nice set of embroidering. However, one might be turned away by how the Michael Kors logo juts out along the bottom, or the “MK” stamped all across the exterior. The Zoppen Multi Purpose Travel Passport Wallet is stylish without being obnoxious.

Passport wallets can be stylish and durable, but the Michael Kors Passport Holder leans towards the former. Leather looks great, but it can get brittle and crack if it isn’t treated properly. If you do use it often, you run the risk of it falling apart over time.

Furthermore, its usage is fairly basic. Unlike the Zoppen Passport Holder, you don’t even get the most basic of RFID protection, which leaves your credit cards open for attack (if your cards don’t already have protection). Having 7 card slots is nice though.

Measuring 5.5 x 4 x 0.6 inches in size, the Michael Kors Passport Holder isn’t very large, and should fit comfortably in a large pocket. However, it isn’t very versatile. It only covers the three basic needs when traveling: a slot for cards, passport, and money.

The Michael Kors Passport Holder is too expensive for its own good. Sure, it may look good, but we expect more for such a high price. If you want a passport with equal value in function, yet is aesthetically pleasing, you can drop $7 on the GDTK Leather Passport Holder and get the same results.

If a company is going to price their passport holder so high, at least add some additional functions. That’s why the Michael Kors Passport Holder falls flat. It functions just fine as a traveling wallet, but fails to impress us enough to call for its price. Holding 7 cards is great though, but really should have RFID protection.