The only lie that the MCM Men’s Wallet will tell you is that it’s a wallet for men. In fact, both men and women can use it, so it is a little odd they would call it a men’s wallet and alienate half the possible clientele. Still, The MCM Wallet performs well with a slim design and easy access to cards being its top selling feature. Check out our list of cool wallets for more! 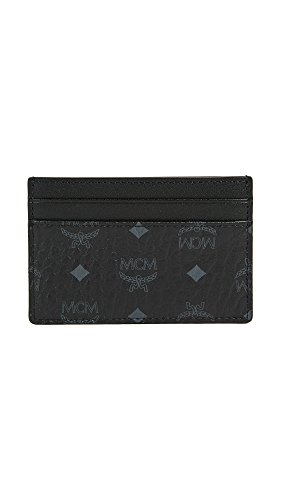 The MCM Men’s Wallet Is a minimalist-designed wallet in every sense of the word. It can only carry cards, has only four card slots, and that’s basically it. However, it performs these tasks with near perfection. The MCM Men’s Wallet includes certain features that other wallets lack for some reason.

The MCM Wallet measures 4”x2.75”. It’s about as slim of a wallet you can get because, well, it can really only carry cards. If you really need something to be able to carry cash and cards, try the Tommy Hilfiger Men’s Cool Wallet. But if the MCM Wallet was manufactured to only carry cards then it should be able to do this well, shouldn’t it? It has four card slots, but each card slot can fit up to two cards inside. And despite the lack of a pull-tab, the cards are still pretty easy to take out of the card slots without having to go through any undue strain.

The MCM Wallet is about as minimalist of a wallet as you can get. So minimalist, in fact, that you can’t even store cash. It is a card wallet through and through. And even then it only has four card slots. It forces you to bring only the bare essentials with you when you go out, or at least bring the bare essentials in terms of cards while you stuff all your cash in your pocket. It’s always a great exercise to think hard about what you need so you’re not overpacking and truly living minimally. But if you still find four cards to be too little, consider the ARW Slim Cool Wallet which can hold up to 15 cards.

Although the MCM Men’s Wallet is marketed just as that, a wallet for men, women, men, and everybody else can enjoy the features of this wallet. After all, having to carry credit and loyalty cards around isn’t an exercise in genderm is it? The card case is available on Amazon, and other retail stores, for $140, which does qualify you for free shipping, but is a little on the expensive side. Try the Travando Slim Cool Wallet if you’re looking for something more budget-friendly.

In an unfortunate turn of events the customer service ratings for MCM aren’t the greatest. Be sure this is the wallet you want to purchase before actually purchasing it. Other than that, the MCM Wallet should fit your needs just fine and force you to eliminate the clutter both in your wallet and, by extension, in your mind.