Remember spinning around as a kid so you could see what it looked like? It might have made you dizzy and landed you on the floor, but it was a way to see the world differently. Lomography’s Spinner 360 camera does the same thing, only instead of vertigo, you end up with a series of pictures that go 4X beyond that of a panorama to describe a 360-degree arc. And it does it in a manner that allows for creativity that a conventional film or digital camera can’t match. Juxtapose with other 360-degree cameras on our latest digital camera reviews.

The Spinner 360 is a big and bulky black beast of a camera mated to a gripping handle beneath the bottom plate. Those who still remember using a 35mm camera won’t find anything unusual in how the back opens or where the film gets placed (first having pulled up on the take-up reel at the left): the film’s end protruding out from the cartridge gets pulled across the back and inserted into a slit, with a stroke or two of the thumb seating it inside. The back is then closed and the locking tab on the left side (raised when opening the back) clicks back into position.

Related: The intuitively designed Mamiya digital camera is the best pick for any newcomer in photography. 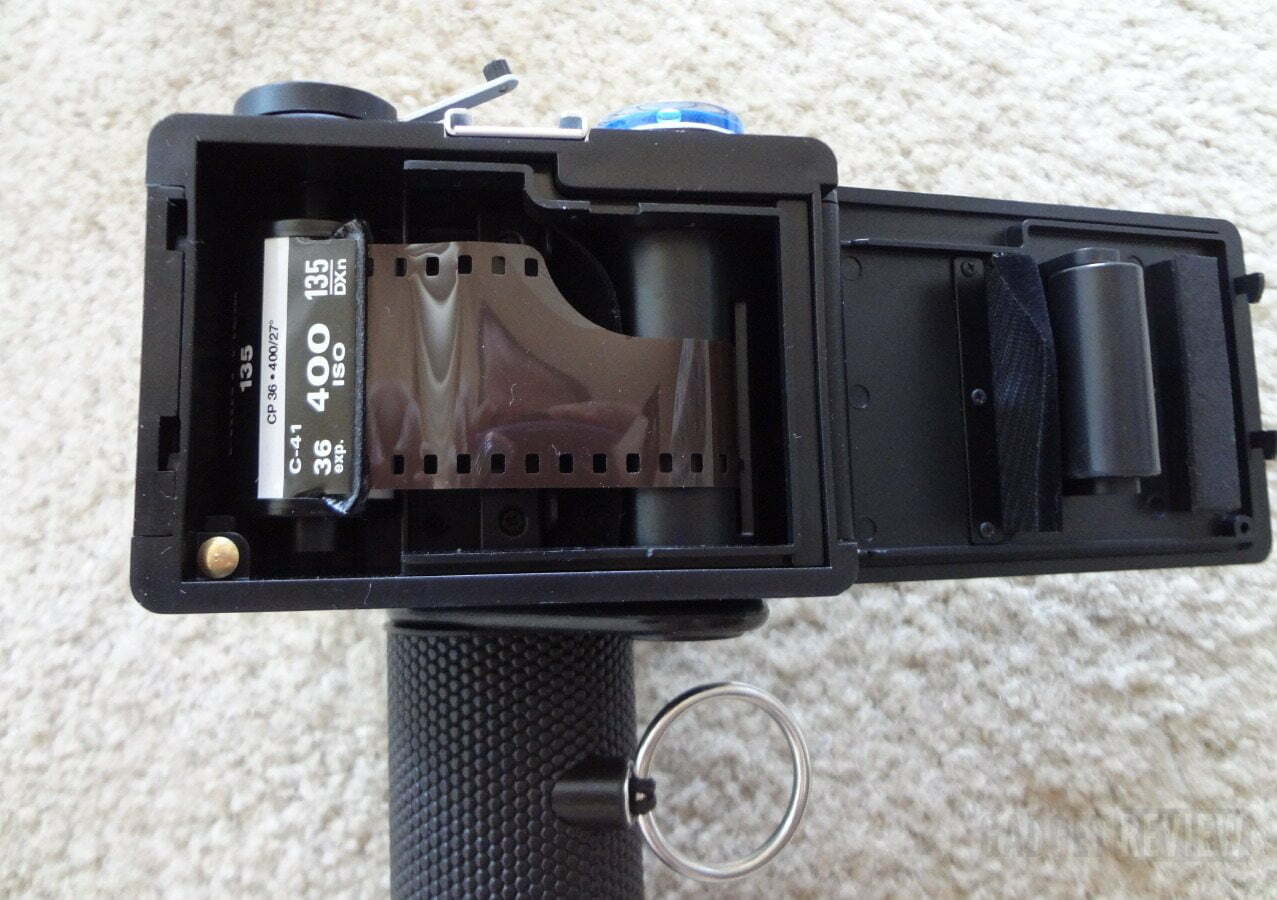 Because of the Spinner 360’s ability to take multiple pictures in succession, a small F-stop is used to insure focus of the fixed-focus lens. So shooting works best when done outdoors — or at least that’s what the manual recommends. The only adjustment that can be made to the amount of light entering the lens is with the aperture settings where you move a tab to the right of the lens either against a Sun (bright) icon for f/16 or a Cloud (shade) icon for f/8. So using ASA 400 color negative film is pretty much a requirement for outside shooting, in order for the camera shutter to capture images without blurring (the shutter speed is about 1/125th).

Related: If live view refresh rate and burst-capture rate intrigue you, the leica digital camera is made for you. 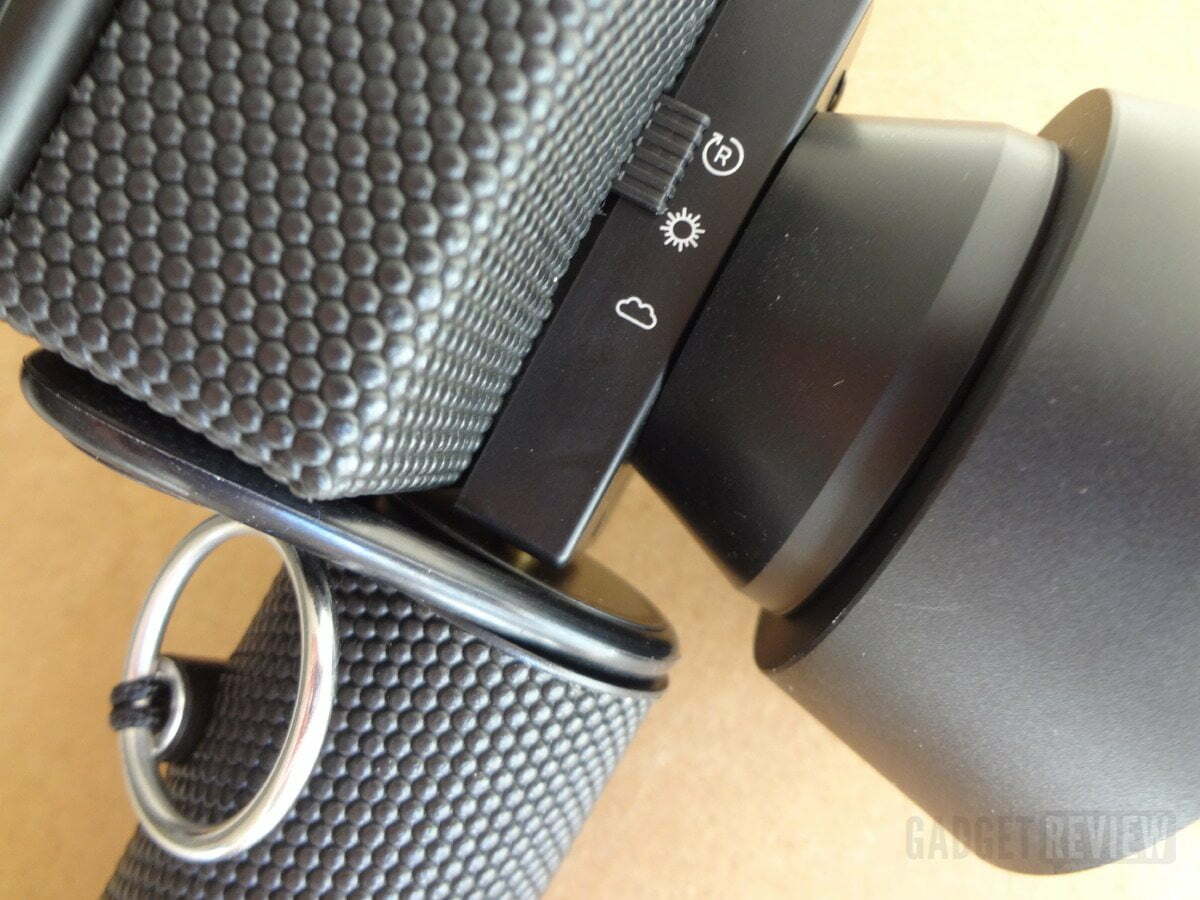 There are a number of sensible features built into the Spinner 360 to improve on the images being shot; the first being the lens hood on the front. Instead of a shutter button, the top right has a bubble level. This can aid in hand-held shooting but using the socket on the bottom of the handle to go into a tripod will guarantee a more even series of shots. However, technique is as much a part of using the Spinner 360, so its use would be defeated if only shot on a tripod and either way you will end up in the picture unless it’s held over your head. Overall, it’s convenient that you get some flexibility in either holding the camera or using the provided tripod mount. The final convenience is a rubber ring to go around the metal one that juts out from the handle and which engages the winding mechanism that rotates the camera.

There’s also an adapter on the top for seating a flash, but for this to have any value it would need to be a self-contained video light with the camera used indoors. With that in mind, if you need more illuminance, you’ll want to use a KobraTech MiLite Selfie Ring Light or a OURRY Selfie Ring Light.

Lomography instructs that you hold the Spinner 360 in one hand and pull the cord with the other, which makes the camera do a full 360 spin. It’s powered by a fully manual rubber band drive, and uses standard 35mm film so you can capture the whole scene and take beautiful landscape pictures, pictures of special occasions, and more.  They encourage you to experiment with your photo-taking creativity by taking pictures at the hip, move the camera around, use manual long time exposures, etc. With the fully manual controls, the possibilities are endless at what kind of shots you can get of the same scenery.

So I first went to a parking lot and stood with a lot of open space around me. I gripped the ring with my left hand while holding the Spinner 360 with my right away from my body. I lined up the bubble in the bubble level and took a deep breath as I pulled the ring all the way out. I released my breath slowly and as I did so, also released the ring and watched as the camera spun around and then stopped. 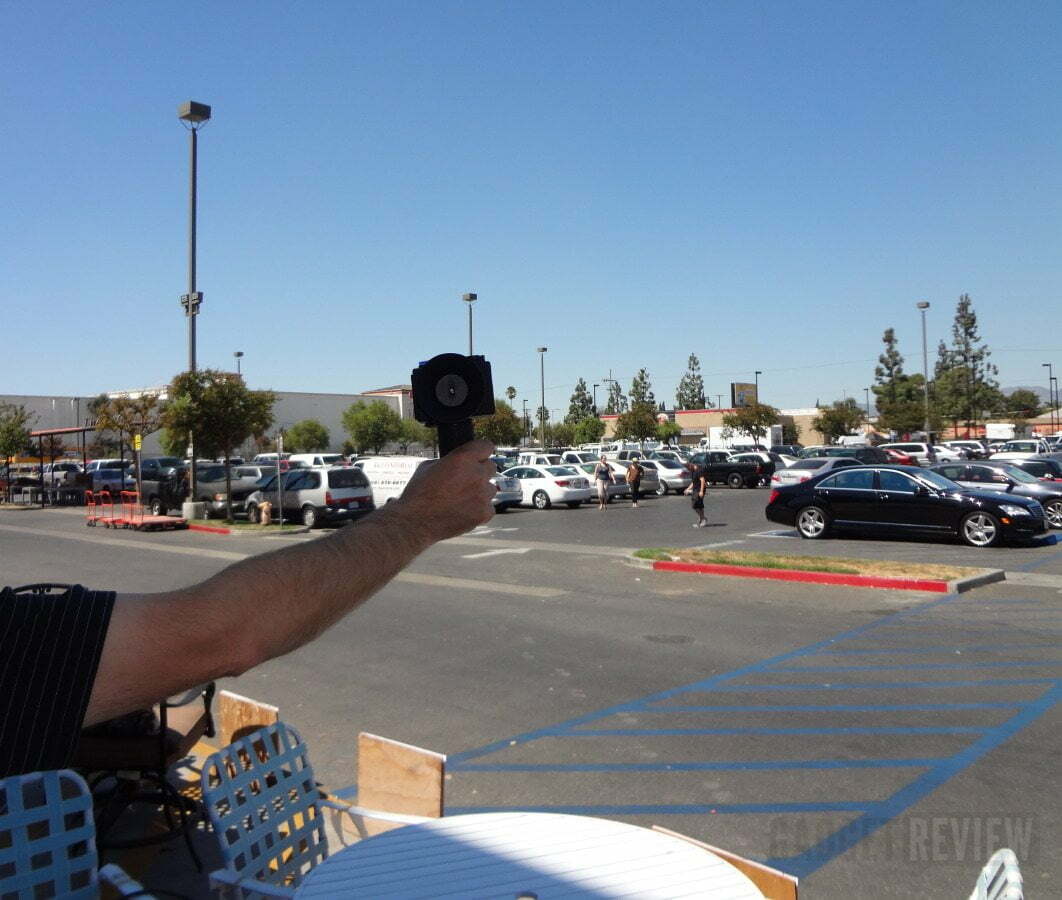 My initial impression was that shooting parked cars was boring, so I went to the outside of a grocery store that had plenty of people coming in and out and did a few more shots. I got very little attention while shooting, although a few eyes did turn my way once the camera began to turn. I also tried lying down on the sidewalk and shot up — shooting in the normal fashion didn’t make sense since the camera is all about doing things differently. I also tried physically rotating the camera by hand, since doing this in a sense “changes” the shutter speed. But since it’s hard to maintain a steady rotation and keep the camera level, it’s best to let it spin on its own (although you can hold onto the ring and slow the spin down). 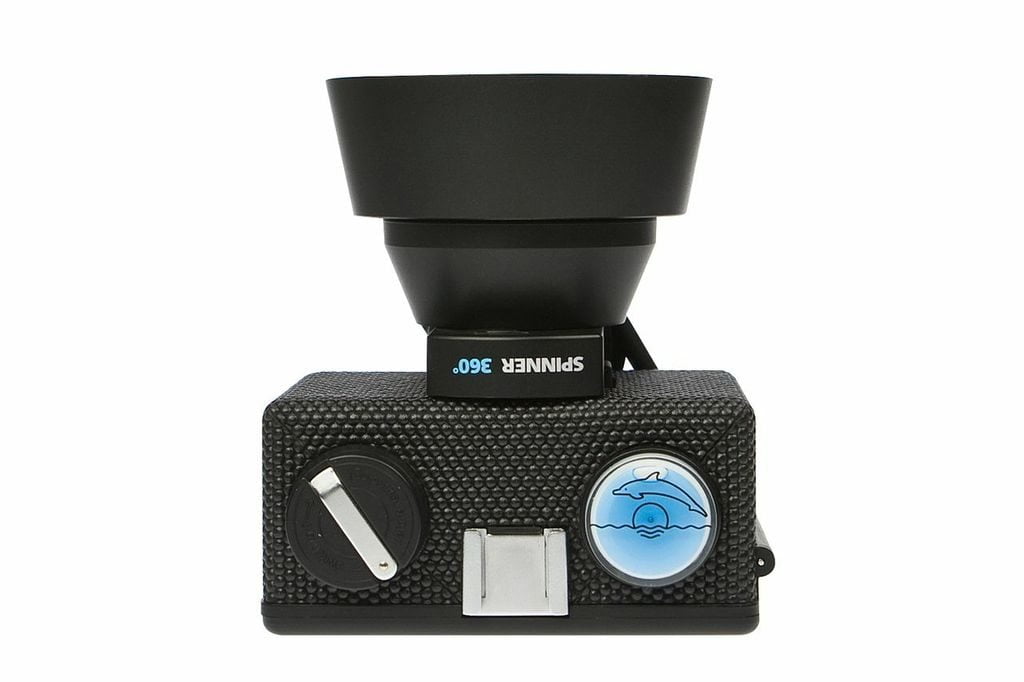 I pulled out the ring again, let go and it stayed where it was — this told me that the film had been used up. I pushed the tab up to “R”, pulled out the crank from the rewind knob and returned the film to the cartridge. I then opened the back, took out the film and headed to a 1-hour lab and asked them to develop the film only and NOT cut the film. I took the developed film and cut out each of the sequences I shot. Holding it up to the window could let me see the diferent sequences at a glance (indoors with ASA 400 film doesn’t come out good enough so maybe next time 800 or even a higher speed) but, more importantly, I could place the entire strip on my scanner and copy it all at once. The finished digital file of the color negative film was then converted to a positive image minus the sprockets.

Bottom line: The Spinner 360 is a highly specialized camera that shouldn’t be bothered with if you want dull and boring images. But if you’re into experimentation and looking for new ways to see the world around you — and just want to have some fun — then spend $99.00 and get out of the rut of shooting digital and return to film. 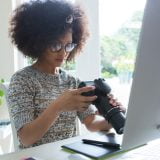 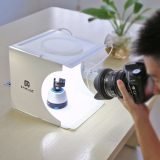 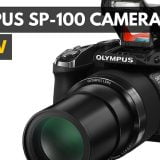 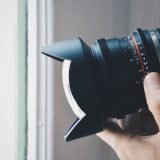 What is a Digital Bridge Camera? 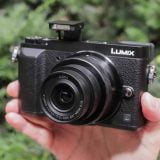 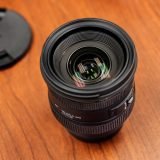 Why are my Digital Camera Pictures Blurry?