As I’ve said many times before, Jawbone’s Jambox pretty much set the bar a few years ago in terms of portable Bluetooth speakers. At the time of its launch the options were few and far between, and until the Jambox arrived nothing, if memory serves correct, provided such sound quality in such a small package. However, since then the market has been flooded with a myriad of Bluetooth speakers. Some good, some just terrible, and some just trying to cash in on the trend. That’s why I was pleased as punch to see an array of new toys, Bluetooth speakers included, coming from Ultimate Ears, which was purchased by Logitech a few years ago. If you don’t recall, Ultimate Ears is known for outfitting front men, as in singers, in major acts, with custom-fitted in-ear monitors. This Logitech is one of the best Bluetooth speakers at the moment, especially if you’d love an outdoor speaker.

Wrapped in black rubber, Logitech’s UE Mobile Boombox is an unassuming device, provided of course you opt for the all-black version. If you’re of the more daring ilk, you can just as soon pick up an all-white version – though I’d imagine scuffs and marring would ensue rather quickly – or any of the aforementioned two finishes with a painted speaker grill in the color of pink, green or blue. Needless to say, whatever color option you choose your experience, at least in terms of sound will remain the same. That said, the UE Mobile Boombook, despite its small package (it measures 4.4″x2.6″x2.4″ LWH and weighs 298g) doesn’t fall short in terms of features relative to its competitors. Embedded into the top of the speaker’s rubber housing is a set of volume buttons that are divided by a Bluetooth pairing button. In addition to their durable build, and minimalist aesthetic, they’re reactive to the press and require anything but a heavy hand to operate. Since the UE Mobile Boombox is smooth to the touch on all sides, slipping it out of bags and the like is not an encumbering process. Other features include an AUX input, a green LED light at the rear to indicate charging and power, and a micro USB port for juicing up its battery.

Pairing the UE Mobile Boombox is the usual affair. Power on, hold down the Bluetooth button until a tone is emitted, a front-facing Blue LED rapidly flashes, and walla, you’re paired. The UE Mobile Boombox can pair with up to 8 devices, and connect with up to two devices at the same time from up to 50-feet away allowing you to switch back and forth between one smartphone to the next. Positioned just above the Bluetooth pairing button is a microphone for, what else, telephone calls. If you’ve used a portable Bluetooth speaker before with a comparable setup, then you know that incoming (and outgoing) calls are automatically routed to the speaker. Which isn’t a good thing in the case of the UE Mobile Boombox. After speaking with a variety of colleagues and friends, they all unhappily reported that the sound quality was “terrible” and it was very echoey; something analogous to a submarine. To confirm this, and make sure it wasn’t based on distance or acoustics in the room, I swapped back and forth between my iPhone 4s’ speakerphone. Unfortunately, all callers reported that the iPhone’s speakerphone, which was in the same proximity, was far superior. If you are looking for a better speakerphone for your calls then check out our Logitech Mobile Speakerphone P710e review.

Speakerphone issues aside, which is hardly the mainstay or the main feature of this Bluetooth speaker, the UE Mobile Boombox is packed with two 1″ full-range drivers. To complement that the back has been outfitted with a slender bass port, though its effectiveness is questionable. That being said, the clarity of the UE Mobile Boomboxes eclipses Jawbone’s Jambox. However, with that in mind, it lacks the same bass responsiveness as the Jambox, though that isn’t to say it is devoid of such. It simply just doesn’t achieve as much oomph in that particular part of the spectrum; it’s a bit flat. At max volume the UE Mobile Boombox holds up surprisingly well, displaying little signs of distortion when sourced from my iPhone 4s or 13″ Macbook Air. Needless to say, the sound signature of Bluetooth by its very nature, and a speaker of this size, is hardly one of high fidelity, but it suffices nonetheless. That being said, and even when jacked in using a headphone cord, don’t expect sound reproduction that is reminiscent of the UE Mobile Boombox’s big brother, the UE Boombox (we’ll have a review on that very soon). But nor should your expectations be such, since the compromise in sound quality (it should be a willing one) is in the versatility, and portability. Now, one of the biggest concerns about anything portable is its battery life. Since I’ve only had my UE Mobile Boombox for a short time I’m going to reserve judgment. However, based on my limited experience the speaker seems to achieve the spec’d 10 hours of playback time, or somewhere in that ballpark – it will vary with how you use it. This is unlike the UE Boom 3, which can give you 15 hours of playback time. Note, that the UE Mobile Boombox does have an auto power-down feature, which will save on battery life quite significantly. I wasn’t aware of this the first few times I used it, and was under the assumption that its battery drained far quicker than expected. To wake it from standby mode I simply had to power it off and then on, whereupon a friendly tone is emitted, along with a glowing green LED on the back to indicate that the speaker is still very much powered. You may also want to read through our NudeAudio Super-M Bluetooth Speaker review.

At $100, the UE Mobile Boombox should fit nicely into most people’s budget, at least in terms of purchasing a Bluetooth portable speaker. It’s about $100 cheaper than the Marshall Stockwell II. That said, don’t let its seemingly low price tag, relatively speaking, of course, obfuscate its capabilities. Sure, the speakerphone is the portable speaker’s biggest drawback, but its simplicity, quality, and refinement are nothing less than I’d expect from the Ultimate Ears brand.

Bottom Line: I couldn’t ask for more from a $100 portable Bluetooth speaker. 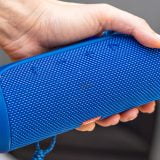