You don’t have to look far for the best mouse that can perform well when you’re working, and when you sit back and relax with a video game. For that, we turn to the Logitech M510. Its accurate optical tracking is precise and responsive, while having a comfortable ergonomic design that reduces hand fatigue.  Discover more about this and more varieties on our best computer mouse reviews. 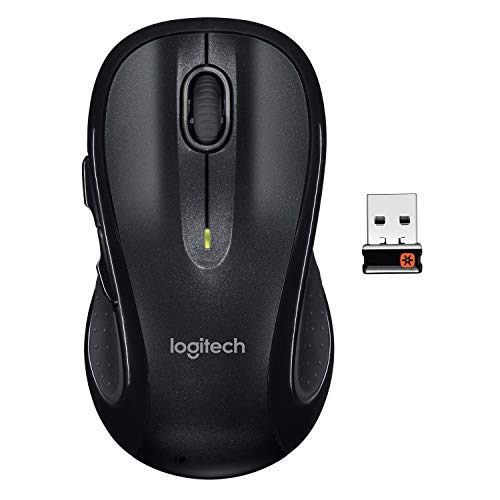 A really good choice for gaming or office work on a budget, thanks to its ergonomic design for long sessions, long battery life, and accurate optical tracking.

The most impressive feature of the Logitech M510 is its optical tracking. It’s surprisingly precis and very responsive on various surfaces. The optical tracking is advanced enough to work, even when a mouse pad isn’t present. That’s a nice feature to have if you forgot your mouse pad at home or for using on unexpected surfaces.

As for battery life, standard batteries can juice the mouse for up to 2 years, but that depends entirely on brand. The Apple Magic Mouse 2 doesn’t have this problem; it uses a rechargeable battery, a trait we wished more wireless mice took advantage of.

As for the design, the Logitech M510 Mouse made the right decision to add curves to fit right handed people and left handed people. However, left-handed individuals will find it harder to use the two side buttons. It’s comfortable enough for long sessions—unlike the Microsoft Arc Mouse—with smooth rubber gripping on the sides. The scroll wheel can move too smoothly at times, lacking good breaks between each tick of the wheel.

Lastly, we didn’t like the use of a USB nano receiver. It takes an entire USB port. Thankfully, Logitech incorporated a unifying receiver, which allows for other Logitech devices to connect to a single receiver—up to 5 at once.

This particular Logitech mouse has a lot going for it compared to other wireless mice. For starters, it has a decent DPI limit of 1000, comfortable design, and overall good performance. It stumbles here and there, but is better as a whole package. To put it into perspective, if you had to choose between the Logitech M510 or the VicTsing MM057, we’d suggest going with the Logitech M510. Yes, the VicTsing is cheaper, but the M510 is better overall. It’s worth spending the extra $10 on it, especially if you like to game and surf the web.

The Logitech M510 is the kind of mouse you want to rely on if you like to do a bit of everything: game, office work, browse the web. Its design means your hand won’t get fatigued after a long gaming session or rough day at work, and accurate optical tracking will keep it on point. It helped come to terms with its use of batteries and USB nano receiver.