If you’re on the market for the best gaming mouse, there’s no reason you shouldn’t consider this Logitech G203 Prodigy mouse review. Its high DPI and IPS provide a great combination for accurate gaming and support various playstyles. And it still provides that great performance without asking for everything in your savings account. If you want a mouse that’s easy to take on the go, you might be better off with our review of the MooGoo MoustBT: Bluetooth PCMCIA sized mouse. 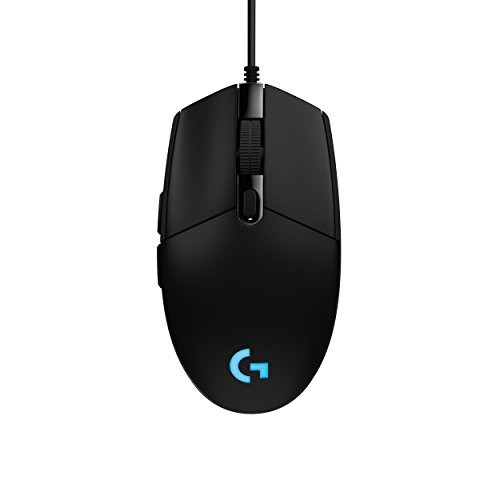 The Logitech G203 Prodigy provides the perfect option for gamers that want a great performing mouse, one that doesn’t bankrupt them, by way of build quality and dipping into gamer-centric features. If you’re shopping for a mouse based on aesthetic, you might also want to read about Corky: a self powered mouse.

Speaking of DPI and IPS, the Logitech G203 offers DPI as high as 6,000. Now, that’s already pretty sensitive and some players will need a higher DPI that’s found in, say, the Razer Lancehead Tournament Edition, but it still supports a high ceiling for various sensitivities. Its IPS of 200 also provides the accuracy you need for quick movements. And since it’s a wired gaming mouse, lag is even further reduced. The G203 compounds its great performance by implementing advanced button tensions, which reduces the amount of force you need to click the buttons.

Aesthetically speaking, the Logitech G203 Prodigy is simple in design, like the Cooler Master MM710, but not to its detriment, and even has RGB lighting you can customize with Logitech’s gaming software. It’s soft curves free of sharp angles unlike the COMPARE, making it a great gaming mouse that’s comfortable in the hands, even for palm grip, but not so much if you have large hands. The G203 is rather small in size. Two additional side buttons can be found on the left side, and the scroll wheel staggers when moved.

For a budget build, or for first timers stepping into competitive play, the Logitech G203 Prodigy has really good value. It has consistent performance, easily recognizable brand, and its pricing is excellent compared to other gaming mice. There’s no debate about that.

However, there are better choices for even cheaper prices (yes, you read that right), and even perform better than this mouse. The Pictek Gaming Mouse is one example. But if you represent Logitech, and you’re in competitive gaming seriously, then the Logitech G Pro should be considered if you have the funds.”

Logitech manufacturers great gaming mice that perform well in any situation for affordable prices, and the Logitech G203 Prodigy continues that trend. Its DPI is high enough that it supports a wide range of various sensitivities, while still being accurate with its 200 IPS. However, the G203 is harder on larger hands, considering its compact size. And even though better choices are available, the G203 still performs exceptionally well in its price range.