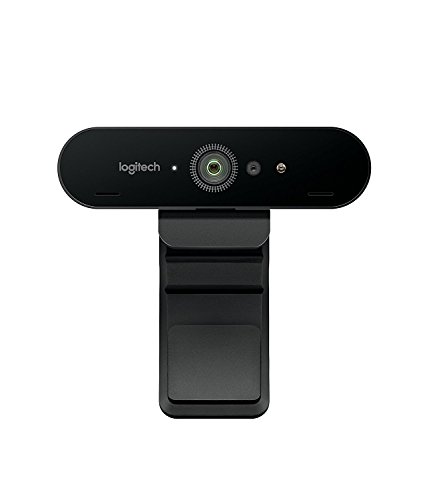 When detail, clarity, and quality are of utmost importance, the Logitech Brio should be your go-to webcam for conferences, thanks to omni-directional mics and beautiful 4K native resolution.

Logitech made the right call by using a premium glass lens instead of plastic. It not only improves durability, but also increases clarity. Despite its performance, it’s rather small. It weighs 11.8 oz—heavy for a webcam—but has dimensions of 1 x 1 x 4 inches.

Yes, the Logitech Brio Ultra HD outputs in 4K, at 30 frames per second. On top of that, RightLight 3 and HDR offer some of the best auto-lighting and image quality you can get for this price. But there’s a catch: you need USB 3.0. Without a USB 3.0 port, you’re forced to drop down to 1080p. That’s still amazing quality, and it even gets an fps boost up to 60.

We highly suggest getting a tripod. The Logitech Brio has a frustrating clip-on design that may wobble far too often, which might make facial recognition difficult without a stable surface.

Worried about zoom? Don’t be! The Logitech Brio has 5x digital zoom. It doesn’t have any internal storage, however, unlike the Logitech C270. What it does have is superb audio quality through two microphones for great stereo sound. You can forget hearing static and white noise; it’s crystal clear. However, the Logitech C922X Pro has a bundle option that includes an excellent Blue Yeti mic.

You can save yourself about $100 if you downgrade to the Logitech C925E Webcam—it operates at 1080p—but the Logitech Brio brings so much to the table that it’s worth choosing over other Logitech cameras. For starters, it’s 4K; that’s great for conferences. More importantly, it’s actually certified for Skype for Business and Cisco. It plays well with MacOS and ChromeOS, and compatible with Zoom, Windows Hello, and more.

It’s so hard to pass on 4K in this day and age. Clarity and resolution get such a boost that it’s almost necessary at this point for use in conferences. Even when you’re limited to 1080p, frames get a bump up to 60. No matter which avenue you’re forced to take, resolution, color, and quality are top notch on the Logitech Brio.