LG LW8017ERSM Air Conditioners are among the best LG Air Conditioner simply for their amazing speed at cooling a room. While it may not be as powerful as other models, it is faster and, after all, wouldn’t you want to be cooled down faster? This speed does make it noisier than most though, so be aware of that. 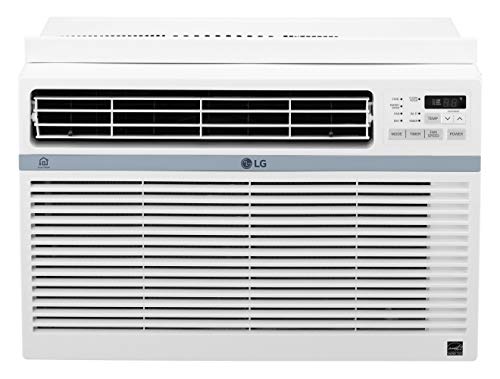 The LG LW8017ERSM is a versatile, powerful, and energy efficient fan capable of cooling a medium-sized room in no time flat and removing moisture from that room as well at a rate of 2.2 pints an hour! Technologically-infused, the fan is also compatible with Alexa and Google Assistant so you don’t even need to leave your sofa to control it.

LG LW8017ERSM Window AC Units can move air quite capably. Able to circulate more than 220 cubic feet per minute around a room, which is more than other AC units we’ve seen so far, with 8,000 BTU’s of power. It may not be the most powerful, but it can cool a 17×20 foot room quickly. Make sure to check out the LG LW1017ERSM if BTU’s are your go-to standard.

LG LW8017ERSM Window Air Conditioners has an excellent energy efficiency ratio of 12.1. It’s also Energy Star certified, which is always a good sign. However, bear in mind that because the fan is so powerful it will also cost more to run. Despite being a mid-range AC Unit, some estimates place the annual cost of running the air conditioner at $60.00

The LG LW8017ERSM Window Unit removes more moisture from the air than most of its competitors and even fellow LG products, like the LG LW1816ER. The amount it removes is rated at 2.2 pints an hour. Very impressive, especially if you live in an area where summers are very humid. Further, the dehumidify option allows you to get rid of moisture without cooling the room.

One of the biggest drawbacks of the LG LW8017ERSM is its weight. At almost 60 pounds, it’s one of the heavier models we’ve reviewed. Once you set it somewhere you’ll have a hard time picking it up and moving it. If portability is what you’re after, check out the LG LP1419IVSM. However, this heaviness can add to the durability of the fan by making it stay firmly in place with jiggling even at the highest fan speeds.

The LG LW8017ERSM comes with a stylish remote control so you can control the fan and all it’s features without having to walk up to it. Because it can also connect via wi fi, you also have the option of controlling it with the LG ThinQ App or even with Amazon Alexa or Google Assistant! It’s, unfortunately, a bit on the noisy side, but that’s expected with fans of this power.

The LG LW8017ERSM is a heavy unit, so don’t think you can move it from room to room as you travel, and will cost slightly more to run per year. But at $60, it’s still more than an acceptable price. Just think about how fast you’ll be cooled down during those hot 100 degree days, more when you add in the humidity, and that $60 will seem worth it.