The LG 34GK950F-B is one of three LG Ultrawide monitors that are tweaked to provide the best experience in gaming. It’s a Nano IPS display that has nanoparticles that absorb excess light, and covers 98% of the DCI-P3 color space to bring forth the sharpest images. The gaming monitor supports HDR content for a hyper-realistic picture, and this earns it a place among the best monitors for video editing. In spite of the fact that it’s 1000:1 contrast ratio doesn’t offer deep blacks that are good enough for a dimly lit room, the IPS panel still does a good job with a peak brightness of 400 nits for greater visibility. If you prefer a dual monitor setup, you’ll definitely be interested in reading our guide to the Dell multi-client monitor: makes multiscreen setups unnecessary. 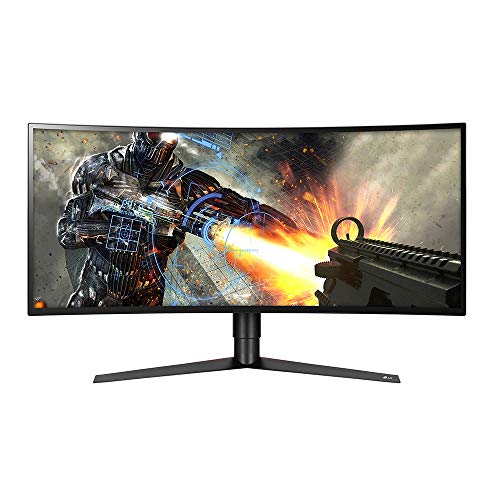 The UltraWide LG 34GK950F-B features a 1900R curvature for its 34-inch screen size, giving a wide Field-Of-View that a lot of gamers come to appreciate. The gaming monitor has a variable refresh rate of 144Hz courtesy of Adaptive AMD FreeSync technology for tear-free gameplay, and a 5ms response time that shoots down to 1ms MPRT when Motion Blur reduction is switched on to cut down ghosting. Also, you may want to check out this review on Acer releases their S1 Series LCD monitors.

Input lag on this Ultrawide Gaming Monitor is kept at a minimum of 12ms thanks to Dynamic Action Sync, meaning players get to enjoy a more responsive and fast paced gameplay. The LG 34GK950F-B’s Radeon FreeSync 2 has a range of 55Hz – 144 HZ, though to achieve a response time of 1ms, the refresh rate must be at 144Hz. The LG monitor also knocks out lower resolution competitors such as the ViewSonic VP2468 ColorPro despite not being a 4K display. Being an IPS panel however, it has just a bit of IPS glow but this depends on which side of the monitor you’re looking from. The monitor also has more than one gamer mode to save different presets and preferences.

Being slightly bigger than the Dell Ultrasharp UP3216Q, the LG 34GK950F-B features a very basic design, with all-round thin bezels and a two pronged stand that has a slight red accent. The display can be slightly tilted and swiveled, but it’s curved nature doesn’t allow for a portrait setting. The display can be VESA mounted on a wall, and if you did this you’d need your separate speakers since the monitor doesn’t have any of its own.

One thing you should know about the LG 34GK950 is that it was released as two models. There’s the 34GK950F-B model that is meant for FreeSync, and the 34GK950G-B model that’s meant for G-Sync. Thanks to AMD FreeSync support however, this monitor is compatible with both AMD and NVIDIA graphics cards. Between the two, we would recommend the 34GK950F-B as it is slightly cheaper, supports HDR, and has a high refresh rate of 144Hz compared to the 34GK950F-G’s 100Hz. Compared to the AOC U3277PWQU, these features blow it out of the water & make it one of the best ultrawide gaming monitors you can find.

The LG 34GK950F-B is guaranteed to give you the best ultrawide gaming experience, at a price that’s not too exploitative either. The monitor is also a great choice for users who want to do professional work as it has a high color accuracy thanks to its wide color gamut. Despite having no speakers and a relatively low contrast ratio, it still remains a great pick for ultrawide gaming.