At first glance, the Levis Wallet might appear to be one of the  Best Cool Wallets, but on closer inspections, it’s anything but. However, its slim profile and basic functions do allow it to step towards the Best Front Pocket Wallet, but only a single step. Basic or not, its RFID protection adds a level of security. 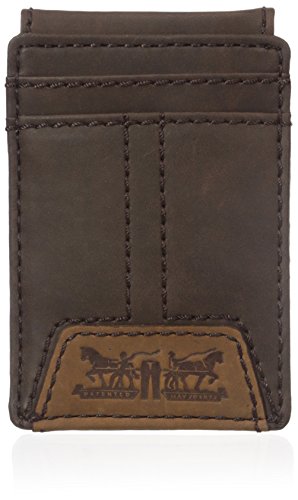 If a basic, functioning wallet is what you’re after, the Levis Wallet doesn’t do more than that. Any card you store into its slim profile is protected by a layer of RFID blocking technology.

With a well-known brand like Levi’s, you’d think Levi’s Wallets would be aesthetically pleasing to the eyes. No matter which version you choose, all have similar issues: the stitching isn’t consistent, and the leather isn’t entirely symmetrical. That’s unacceptable for a wallet asking for $33.

Durability is also called into question. The leather is notably thinner than its previous version, reducing the overall lifespan of the wallet. Even worse, edges can get frayed and possibly split just after a year of use.

The Levis Wallet doesn’t fare that well when in use either. It has RFID protection to add a layer of security, but it’s only protecting a measly 4 cards! The average person could have 6 or more cards. If the number of slots doesn’t bother you, we suggest going with the Herschel Charlie Wallet instead. The Karlling Organizer Wallet is perfect if you do not like carrying cash around since it has the capacity of carrying up to 20 cards.

Its only exceptional feature is a slim profile. Like the Crabby Wallet, it’s incredibly easy to slide the Levis Wallet right into your front or back pocket. Other than that, it isn’t versatile in the slightest. You can’t tangle it from a hoop.

Levis is definitely asking for too much here. It does have a $12 model, but it reduces the number of card slots to only 2, from 4. That’s even worse! Considering its features and overall performance, you’re better off spending the same amount on a Vaultskin Notting Hill Wallet. It looks fantastic in comparison, holds more cards, and has RFID protection as well.

The Levis Wallet is too risky of a buy, especially when you consider a few damning reviews customers left behind. Its slim profile might catch the attention of minimalists, but its limited number of card slots and features could have them turning away. RFID protection is also a great feature to have, but there are too few cards to protect.