The Lenovo Yoga C630 Chromebook is a premium 2-in-1 aimed at a niche sector of the market, going after the Google Pixelbook and, to a lesser degree, entry-level Windows ultrabooks. As far as Chromebooks go, it’s surprisingly well specced out; an i5 8250U is expected for the price point and overkill for Chrome OS, while 8 GB of RAM is nice to see in a sea of 4 GB devices. 128 GB of slow eMMC storage is a bit disappointing, as 256 GB SATA SSDs are pretty standard at this price point, but it really won’t make a difference for Chrome OS. Thanks to its good screen and overkill performance, it’s one of the best Chromebooks for seniors, though it comes at a high price tag. This would make a great gift for anyone shopping for the best Chromebook that is somewhat affordable. 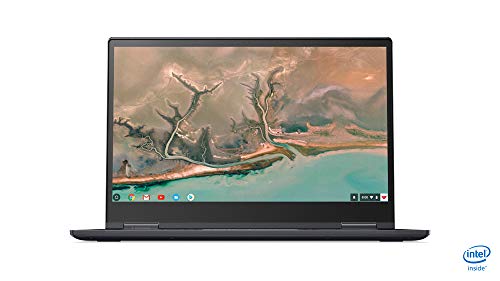 The Lenovo Yoga C630 Chromebook is a great high end chromebook with an overkill i5 processor, a decent display (one that’s upgradeable to an excellent 4K display at that), and plenty of extra bells and whistles to provide a top-of-the-line Chrome OS experience.

The base model employs a pretty typical 1080p IPS panel, while the upgraded model steps up to a 4K display (unlike the Lenovo Chromebook S330 that lacks a 4k screen). Both models offer good colors with decent brightness, and both share the same integral feature–they can flip to turn the device into a large tablet. Coupled with support for Android apps, this feature grants the Lenovo Yoga C630 Chromebook surprising flexibility for a Chromebook, though its large size and proportionately high weight make it clunky to use as a tablet.

For the hardware it’s packing, battery life is decent on the Lenovo Yoga C630 Chromebook (as it is in the Lenovo Yoga Chromebook C630 which is a completely different model). A 56Whr battery paired with a 15W i5 8250U doesn’t sound especially impressive on paper, but Chrome OS’s lightness coupled with the crazy efficiency of Core U allows the laptop to deliver between 6 and 8 hours of continuous use. All but the heaviest users should be pleased with those figures; it’s enough to make it through a typical workday, particularly if you don’t run the brightness at max. If those figures aren’t high enough, the Acer Chromebook 514 is a decent–but worse–alternative; it has a worse (but still solid) display and weaker hardware, but it has very similar build quality and almost twice the battery life.

Weight is a mixed bag on the Lenovo Yoga C630 Chromebook. As far as 15.6” laptops go, it’s incredibly light; it comes in at 4.2 lbs., which is definitely on the lighter side for 15.6” machines. As far as 2-in-1s go, though, it’s very heavy; 15.6” is awkward enough to use as a tablet, but when it’s in a full laptop chassis that weighs as much as a full laptop, it looks less and less appealing for any level of extended tablet use. If tablet use matters at all to you, consider the HP Chromebook x360 14 instead; it’s smaller and lighter, but has weaker hardware and a worse display.

Great build quality paired with aluminum construction makes for a durable laptop that’ll hold up across even years of use. While it’s no ThinkPad in terms of ruggedness, it’s about what you’d expect of a premium ultrabook–or in this case, Chromebook.

Port selection is decent but unexceptional. You’re looking at a single USB C port, a single USB A port, a microSD card slot, and of course an audio jack; there’s no HDMI or mini DisplayPort present, which is a bit disappointing on a laptop of this size. As you’d expect from Lenovo, its keyboard is excellent; travel is decent and it overall provides a solid typing experience.

The Lenovo Yoga C630 Chromebook is a surprisingly competent offering overall. It checks every major box, delivering everything you’d expect out of a Chromebook without skimping on key specs, for the most part. A larger, faster drive would have been nice to see–eMMC is very dated technology all around, outclassed by even a standard SATA SSD and competing flash standards such as UFS–but doesn’t detract from the experience, but outside of that, for a Google Chrome, basic app, and media consumption machine, you can’t go wrong with it if you can pay the steep price of admission.