At first glance, the Lenovo Flex 5 14 isn’t much to look at, but with this laptop, it’s what’s inside that counts. The performance of this laptop is absolutely top-notch thanks to the AMD Radeon graphics card and CPU. Though it doesn’t quite reach the top three on our list for the best travel laptop and the best laptop, this 2-in-1 is more than meets the eye. 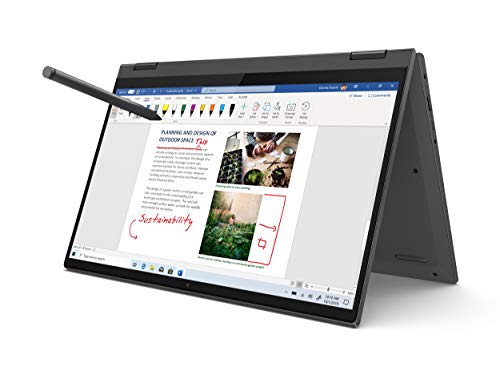 2-in-1 laptops can be a bit of a gamble; their focus on portability typically means their performance is subpar. Not so with the Lenovo Flex 5 14, which makes the most of its AMD Radeon graphics card and CPU.

Power and performance aren’t typically the most exciting aspect of a 2-in-1, but the Lenovo Flex 5 14 is anything but typical in this regard. The integrated AMD Ryzen 5 chip effortlessly runs creative software like Photoshop and even consistently plays games well, albeit using low-quality settings. Though it’s ultimately not as powerful as the more expensive Lenovo Yoga C940, the Lenovo Flex 5 14 performs admirably, even when compared to machines with an Intel Core i5 or Intel Core i7 processor. This laptop isn’t perfect, though: the display, while crisp and clear, is unfortunately rather dim, making it near impossible to work in a brightly-lit space.

Lenovo advertises this laptop as capable of 10 hours of battery life, which most reviews confirm. By comparison, the Lenovo Flex 5 14 doesn’t quite stack up to the 12-hour battery life of the HP Spectre X360 13t, though it does provide more work time than the Lenovo Flex 14. While 10 hours is more than enough to get through a day of work, if you are working in a slightly brighter space it’s likely you’ll have the brightness cranked all the way up, which will negatively impact this battery’s daily longevity.

The Lenovo Flex 5 14 sports several connectivity options, which isn’t always the case for 2-in-1s. This laptop has a power port, HDMI, a USB type C port, two USB type A ports, and a full-size SD card reader. Additionally, the USB C port supports charging as well as the dedicated power port. Thanks to all of these connectivity options, hobbyist creatives should be able to utilize the Lenovo Flex 5 14 for video and photo editing. Again, though, this is somewhat hampered by the laptop’s mediocre display.

Though it doesn’t have perhaps the most exciting design, the Lenovo Flex 5 14 is sleek, sturdy, and flexible. Since this is technically a budget laptop, the chassis is a bit bulkier than other, more expensive 2-in-1s, which makes it difficult to use for long periods in tablet mode. That being said, this laptop still only weighs around three pounds, which makes it plenty light for lugging around campus. The key travel is decent as is the touchpad; both of these are obviously not as satisfying as the keyboard on other laptops, but, for the price, it’s more than adequate.

For the quality of the Lenovo Flex 5 14, it seems Lenovo could definitely get away with charging at least another $100. Though the design is minimal and the screen isn’t the best, the amount of power and features you get far surpasses that of many other pricier alternatives. The fact that this laptop is so versatile is really what makes it shine. Students could write papers, take notes on the touch screen with the optional active pen, watch movies, and play games all on a single device.

The Lenovo Flex 5 14 is a solid 2-in-1 that is perfect for students that want a good deal on a great computer. At just $600, it’s honestly surprising to see how well this laptop performs a plethora of tasks, all while holding a charge for a full day of work. It’s unfortunate, though, that the display itself cannot showcase the full potential of this laptop. The connectivity options are another plus, especially the SD card slot. The design is relatively bulky when compared to other laptops of this caliber, though not so much that it would be a burden to carry from class to class.