Back in the 1980’s, New York was known as a state where a lot of bike thefts used to happen very frequently. Due to the many complaints that Kryptonite used to receive from bikers in that state, they set forth to create bike locks that would offer the highest form of theft protection, and they called them the Kryptonite New York Bike Lock range. Among these we have D-locks such as the Fahgettaboudit Mini, Evolution Mini, and as you might have guessed, the New York Standard U Lock. This sturdy bike lock comes with a hardened steel shackle that is strong enough to resist bolt cutters and leverage attacks, while fitted with a smooth locking mechanism that won’t leave you fidgeting with it. If this one lock sounds like the kind of anti theft protection you need against bike thieves, make sure you get to the end of this review to see how many ways the Kryptonite New York Standard can be the best bike lock for you. If you want to upgrade your bike lock, you should also take a look at our guide to how Stemlock protects your bike from being stolen. 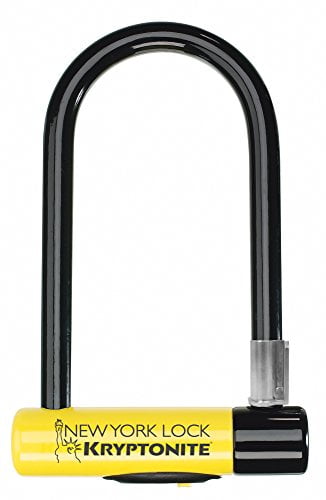 The Kryptonite New York Standard is probably the best lock you could get right now especially if you’re a cyclist that tends to use your bike on a daily basis. It comes with a double deadbolt design that engages both shackle-ends to make it even more difficult for anyone else to run away with your bike. If you want another useful accessory for your bike, you should also read our review of the Topeak mini rocket LED iGlow pump.

The Kryptonite New York Lock has a high security rating of 9/10 on the Kryptonite security scale, and is a recipient of the Sold Secure Gold bike lock rating. It comes second only to the 18 mm high security steel shackle from the same company, but even at 16 mm, its steel shackle resists even the toughest attempts to break it open. The New York Lock relies on a double deadbolt design, which would mean a thief would have to make two cuts to the security disc to make away with your bike. Just like the SIGTUNA Bike Locks Heavy Duty U-Lock & the New York Faghettaboudit mini, the New-U Lock Kryptonite bike lock comes with a set of three stainless steel keys, and in case you lose them, Kryptonite will still ship your first 2 replacement keys for free. How’s that for a good deal? And if you’ve always wanted to ride on something unique, take a good look at our review on the magic wheel scooter; a unicycle meets skateboard (video).

Compared to other models such as the New York Faghettaaboudit Mini, the design of the New-U Kryptonite Style Cylinder is not really as unique from other U Locks in appearance, but it’s almost the same size as the Abut Granit X Plus. It doesn’t come with a cable lock, but this shouldn’t be any problem since the steel shackle resists a wide range of tools that a potential bike thief would use to steal it. Go for the New-U bike lock especially if a chain lock like the Sportneer 5-Digit Combination Chain Cable Bike Lock just isn’t your style, and if you’re looking for the best bike lock to keep your bike safe whether you’re in New York or any other part of the world.

In case you buy the heavy duty U Lock Kryptonite New York bike lock and still get your bike stolen, the team at Kryptonite is offering up to $4000 in reimbursement if the theft happened within a year after your purchase. This doesn’t mean that the lock is any less secure though. Also worth pointing out is that you won’t get this kind of guarantee with models such as the Via Velo Bike U-Lock or the Abus Granit X Plus, so it’s really important to consider the kind of after-sales value you’ll stand to get from the company you buy from. Other than that, the Kryptonite lock also features a unique LED key fob that illuminates the lock for improved visibility at night. If the New York Standard bike lock doesn’t quite fit in with your needs for whatever reason, then perhaps the Abus Granit X Plus 540 may be a worthy alternative since the two brands are both well known as the best providers of bike security locks in the US.

Kryptonite is a reputable brand when it comes to bike security, and it’s high performance steel shackle resists manipulation from a wide range of tools that a thief would use to gain access to your bike. In the unlikely event that this happens, you want to make sure that the first thing that you did after purchasing this lock is to register for the Kryptonite Key Safe program so that you’re eligible for reimbursement (bear in mind that they hold the rights reserved to decide whether or not recompense you). 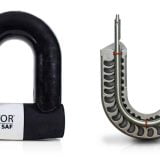 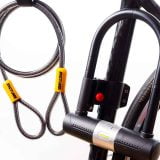 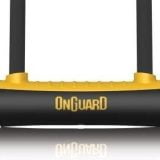 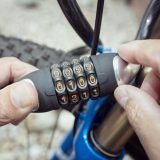 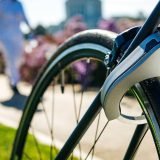 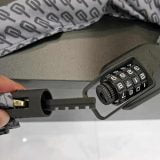