Among the age-old battle of charcoal grills and gas grills, electric grills have been going up in popularity quite a bit. So, when looking for the Best Grills, more people will have a few electric grills in their shortlist too, along with others. For those with deep pockets, the Kenyon Electric Grill has a fantastic chance of becoming pretty much the Best Electric Grill for them. 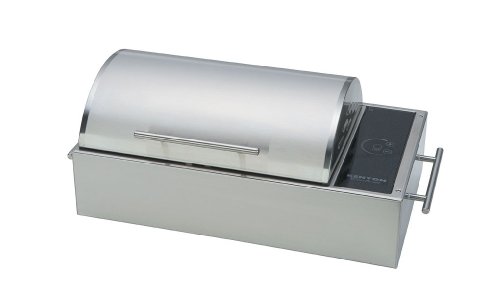 The Kenyon Electric Grill is a unique, albeit costly, portable electric grill. This Kenyon city grill differs from other electric grills mainly in terms of the given cooking area. It’s astronomically larger than anything you’ll see below the same price point. And it’s approved for both indoor and outdoor use.

This Kenyon Grill sports a 1300 Watt heating element inside. It’s definitely good, don’t get us wrong, but it’s not the best. Even the Weber Q1400 (that costs a fraction of this Kenyon Indoor Outdoor grill) comes with a more powerful heating element (1560-Watt).

Compared to something like the Zojirushi Indoor grill, it is a reasonably large grill. So much so that this grill won’t really fit on top of small side tables. The large size is pretty much mainly due to the larger than usual cooking area and the large touch control panel.

Other than the touch control panel, it is mostly made out of marine grade stainless steel on the outside. Unlike the George Foreman Electric Grill GGR50B, the non-stick coating on this Kenyon Grill stays put for a very long time.

The touch control panel gives this Kenyon grill a lot of flexibility. It’s easier to operate than even a gas grill of the same caliber. And we already mentioned the nonstick coating on the cooking grates. The included drip trays are top-notch and do their jobs perfectly to prevent drips.

At first glance, the Kenyon Portable Electric Grill might seem way too costly to spend money on. However, if you’ve got the money to spend, it’s not exactly a poorly valued product. It comes with a pretty much complete set of stainless steel drip trays for you to replace. And the huge cooking area should not be taken for granted.

If you’re in a restricted neighborhood, the Kenyon Electric Grill is pretty much as good of a grill as you can get. It might be slightly bigger and heavier than others, but the feature set is most definitely worth it.