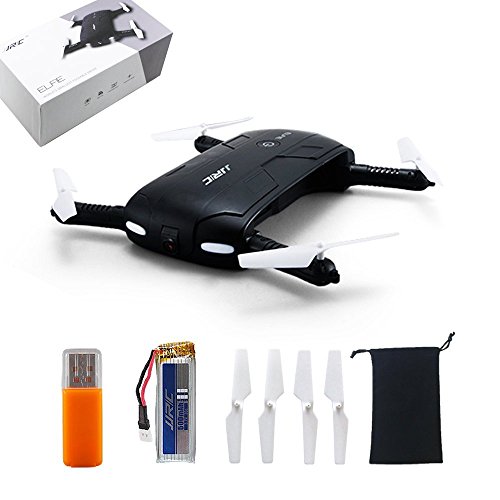 The JJRC H37 Pocket Drone is an entry-level drone in every sense of the word, and that’s okay. The 11 miles per hour top speed is more than enough to get your bearing and be able to fly the drone indoors in case weather conditions outside are less than optimal. And if weather permits, the drone weighs so little that it’ll be a cinch to carry around.

The JJRC H37 Elfie Foldable Drone can attain a maximum speed of approximately 11 miles per hour. Normally this would be considered unacceptable, but considering its price and the fact that it’s an entry-level drone, it should be more than acceptable to get your bearings. But if you’re confident in your piloting abilities and want something faster, try the DJI Mavic Air Fly More Combo.

Whie the speed of the H37 Pocket Drone may be acceptable, its flight time is not. Powered by a 400mAh battery, the drone can achieve six to seven minutes of flight time. Moreover, the charge time is approximately one hour. The charge time to flight ratio is unacceptable, so investing in more batteries is a must. Or you can check out the Autel EVO Drone for far more impressive battery life.

The drone weighs about half a pound, so it’s easy to carry around with you. If that’s not enough to convince you, its body is also foldable, which makes transportation even more of a breeze. If you do want something a little chunkier, consider the DJI Mavic 2 Pro Drone. The H37 Pocket Drone also comes with cushioned propellers, which still allow the drone to fly if a crash does occur. Also check our Kizmo K160 Portable Drone review for a portable yet durable drone.

The H37 Pocket Drone offers a 0.3MP, 480P, Wi-Fi FPV camera. While the display may not be full-HD quality, it’s still more than enough to get the job done. Still, it’s understandable why some people may be upset about not having full HD. Video can be streamed on your mobile device or tablet via the JJRC app. What’s more, the H37 doesn’t require you to have a microSD card to store videos.

There are still plenty of excellent features packed into the H37 Pocket Drone. The control range is approximately 100 meters, which is more than enough for a beginner drone and complies with local laws about a drone operator being within 200 meters from their drone. Unfortunately, the remote control is constructed with only one analog stick, which eliminates the possibility of cool-looking aerial acrobatics.

Related: Our JJRC H37 review also highlights a drone with a 150 meter range.

The story of the JJRC H37 Pocket Drone is a story of one step forward, one step back. Perfect speed for a beginner, but lacking in battery life. One hundred meter operational range, but a poorly designed remote control. If there’s one thing that’s hard to argue against, though, it’s the price. If anything, pick one up to see if drone-flying is really your thing and something you’d like to pursue in the future.

Bottom Line
Reader Rating0 Votes
0
What We Liked
What We Didn't
7.8
Expert Rating