When we think about outfitting a man cave, all too often we focus on the gadgets and gizmos that we can throw into it; what super huge television would look best, how many game systems are too many, where to put the kegerator, etc – but we can overlook the seating arrangements. A comfortable seating arrangement can make a big difference, especially at work. That’s why we wrote our guide to the best office chair. Check it out.

Maybe you want the best mesh office chair. Or something different like this. Or, if you love to read, you’ll be interested in our Sunflower chair with a built-in bookcase.

I’ve been in several man caves that have all the latest and greatest in high-tech home gadgets, but have ratty old couches because the budget was blown elsewhere – either that, or the owner overthinks things and goes for some stiff-as-hell leather seats. In a good man cave, you want comfort; someplace to get away from everyone else and relax. Maybe some people can relax on stiff chairs or crappy couches, but I would definitely prefer something different – enter Jaxx. If you’re looking for a gaming chair take a look at our reviewed Anda Seat Axe Series high-back gaming chair.

Alternatively, if you’re looking for economic chairs, check out our review of the Humanscale Freedom office chair and the Knoll Regeneration ergonomic chair.

When I started talking to the Jaxx Bean Bag rep, I didn’t really know what to expect. I am pretty sure that my experience with bean bag chairs was that of most people’s – the small sack with a vinyl covering and tiny beads inside. Comfortable to an extent, but not very large or aesthetically appealing – even discounting how thin the outer shell is and what a horrible mess you have when they get a hole, a bean bag like what I was used to would never be something I would put in a room to get away. It wasn’t until I took the time to actually learn about the Jaxx bags that I started to see the difference between them, and those cheap ones that you can pick up at a local Walmart.

When the package from Jaxx came to my doorstep, I was immediately perplexed – the box was roughly two feet square – not anywhere near as big as I had thought it would be, it was deceptively heavy though coming in at a little over 35 pounds!

Once I opened up the box and started taking out everything though, it quickly became apparent what was going on. You see, dear reader, while checking up on what made Jaxx bags different I found out that they were full expandable polystyrene – and what I assumed would be little balls ended up being much larger “chunks” of the stuff. The expandable polystyrene was vacuum-packed inside of a package that was basically the size of the shipping box – minus the space for an inner and an outer covering.

How it all works is like this: you open up the inner zippered cover, toss the vacuum-packed cube inside, open it up zip the inner cover closed, and then break the zipper off to prevent nosy children from getting into things.

After that, it was like some crazy science experiment as the cube quickly expanded to fill the entire inner bag. Now you are supposed to leave it to sit there for about six hours before doing anything, but I stupidly opened the cube right in the middle of my living room – when my wife came home she wanted it moved then and there.

I tell you this as a warning now, you should NEVER grab a hold of the inner cover and try to move it (at least not lift it) – doing this I accidentally ripped the inner cover, meaning I had to scramble and put the outer shell on before it was time.

Do I think this had any impact on the final product?  Not at all – it just means that I will have to use a carpet cleaning wand or the like to wash it from now on, as I do not dare remove the outer shell.

For anyone else though, you can remove the outer shell to wash it should the unfortunate spill or stain happen – it is a polyester fabric, so washing it is no issue. The outer shell is also very resilient and has withstood countless assaults from both dogs and children. I have a two-year-old nephew who absolutely loves to be picked up and tossed down into the Pivot (he likes to push people into it as well). It is quite possibly the most amusing thing I have seen in a long time – he stands on it and laughs “again, again” when you try to walk away – my brother-in-law actually tried to get it off of me because of how much he loves it.

So the Pivot has a toddler seal of approval, how about animals?  As I have said before I have five dogs in my house, and any time a person isn’t on the Pivot (and sometimes even if one of us is on it), the dogs will be all over it. These are dogs that don’t even bother looking at the dog beds we bought them before let alone lay in them, so to have them actively try to be on the Pivot says something good. Kids? Check. Dogs? Check. How about full-grown adults then?

I can honestly say that the Jaxx Pivot is one of the most comfortable things I’ve ever sat on or laid down on. It offers the perfect blend of a recliner with a lounger. The unique construction supports your body keeping you upright without compromising on comfort. The Jaxx Pivot is filled with a blend of shredded polyurethane foam micro-cushions for optimal support and comfort. There is just something about the way that it conforms around your body that makes it feel like you are on a cloud.

Although, if you prefer to sit on a traditional office chair, you’ll want to try the Maxnomic chair or the HON Exposure.

The brushed cotton cover is not only supremely soft and durable, but it’s also removable and makes machine washing a snap (if you don’t accidentally rip the inner cover as I did). The design of the Pivot is such that if it ever needs fluffing, you just have to flip it a quarter of the way over and the bottom becomes the top, and all the foam is repositioned. When I sleep in a bed I generally toss around a bit until a pillow becomes comfortable, so it was quite refreshing to be able to nap on the Pivot without going through any of that – my son called it “daddy’s plop and drop” because I would plop down on it and drop dead to the world – at least until he or a dog would jump on me. I’ve put the Jaxx Pivot as my main source of comfort in my own man cave now, and it is what I use any time I game just because of how comfortable it is – I have even looked into picking up one of their “Solo” models as an office chair for later, but that dear reader is a story for another time.

Bottom Line:  The Jaxx Pivot is quite honestly the most comfortable thing my derriere has ever been in, and would be a fine fit for any room in the house – not just a man cave

You can get your own Jaxx Pivot from their website for $187.00 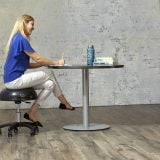 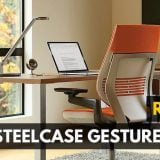 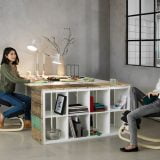 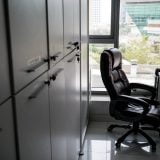 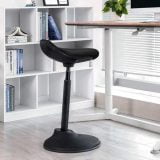 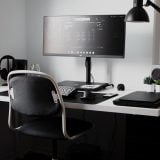