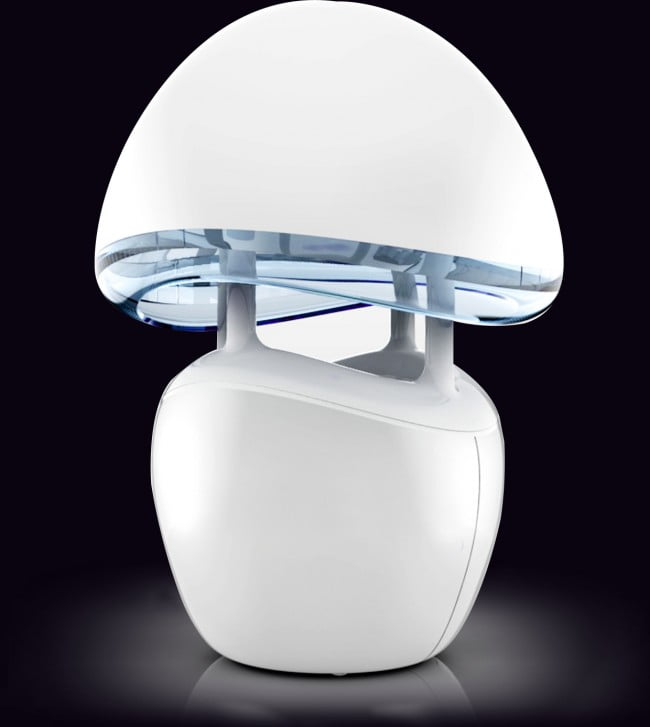 They call it the “dog days of summer.” By that, they mean the weather’s hot and it’s more than just unbearable. But I think the term should refer to the scratching and itching that goes on from being outside — and I don’t mean fleas. Compare this with our Dyna Trap: a Humane and human friendly mosquito trap. Get more great recommendations after visiting our lawn & garden products review.

I do mean mosquitoes — those insidious and nefarious bloodsuckers that zero in on bare skin to give it a “kiss.” If you ever wondered where that bump came from, after a session outside by the pool or a nice read on the patio, now you know. What’s even worse is that these little guys can follow you inside — a place where that bug zapper won’t do any good (as if it could anyway).

But where mosquitoes don’t fear to tread, there’s the InaTrap GR-330 Mosquito Trap. Before we go into how it does, check out the design — looks sort of like a small table lamp from one of those Swedish “hoity-toity” stores, right? Well it ain’t — it’s a mosquito killing machine. And by that I mean it doesn’t hurt you, your pets or any of the furniture.

Rotating the InaTrap GR-330 Mosquito Trap around, you can see there’s a glass rim with a translucent blue color at the base of the “shade.” Below that, on the main body at one side is a power port and below that, a wide mouthed grill. I’m thinking that when this thing is active, mosquitos are going to be entering into the opening beneath the “shade” and then, like the roach motel, they won’t be leaving. 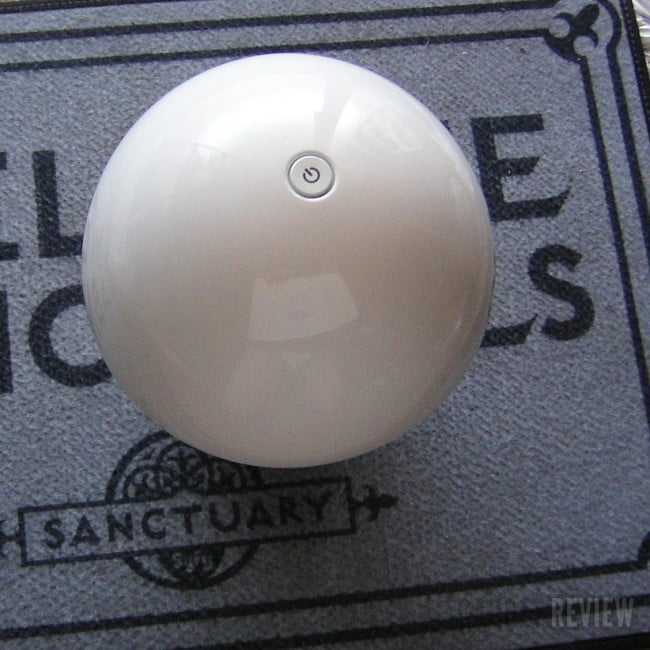 Setting up the InaTrap GR-330 Mosquito Trap is safe and non-toxic (a good thing). Plugging the AC power plug in causes the touch-sensitive button at the top to pulse orange — it’ll keep doing this until a full charge is completed. Then a touch of the switch either turns it on until I touch it again for it to go off, or turns it green to signify that it’s in the 12 hour timer mode. So okay, I get all that.

Now when I turn the InaTrap GR-330 Mosquito Trap on, two things happen. A glow across that glass rim occurs, and I can hear a fan making a “shwoozing” sound. What I can’t see is the UV light that is being used to attract the mosquitos — combined with carbon dioxide that is being given off in minute quantities. And the lighting being given off is intermittent and geared towards the spectral sensitivities of the mosquitoes. So you could say all this contributes to simulating the breath and warmth of the human body — both being tasty incentives to mosquitoes. They come by, get drawn in from below the shade into the body of the trap by the fan and…well you know what happens next and there’s no zapping. Later, pull the grill/tray out and dispose of the refuse. 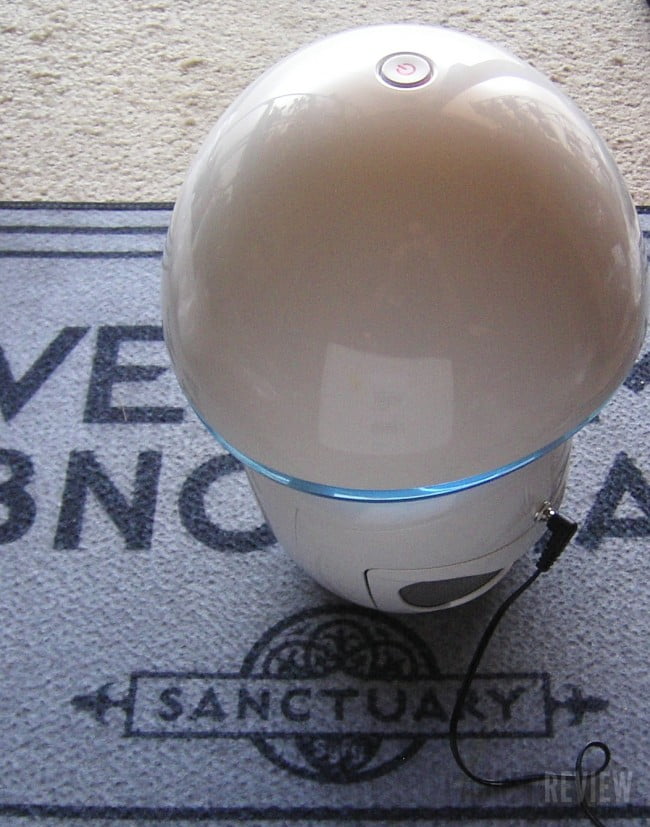 A few simple rules to use it. Get it up off the floor, like on a small pedestal, so that it’s about 2 feet up. And don’t sit or stand near it — the manual points out that the “grease” of the skin will be more attractive for the bloodsuckers than that of the device. So I’m on my patio, with the InaTrap GR-330 Mosquito Trap near the wall light which has an AC outlet — and I’m seated at the other end.

If you read the small manual, you’ll see that the manufacturer points out that you can help the InaTrap GR-330 Mosquito Trap along by introducing added carbon dioxide or steric acid. You do this by placing a bit of wine (carbon dioxide) or some cosmetic creme containing steric acid (check the ingredients) in a plastic bottle cap. Then you place the cap at the bottom of the catch container (the grill) to entice. You’re not placing anything inside at all. 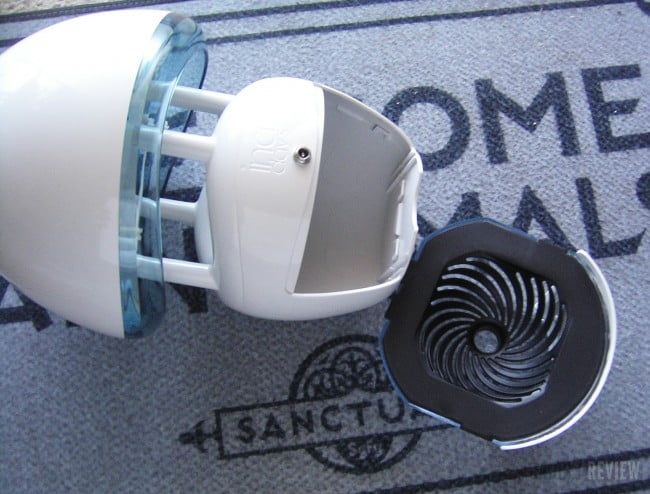 Now the best way to test the InaTrap GR-330 Mosquito Trap is to use it and then check for mosquitoes afterwards. Over a two week period I had it on the patio as well as using it during a picnic in the park (near an AC outlet I was allowed to use). The problem is that if there’s no mosquitoes you don’t know that — but going to a stagnant pool of water isn’t my idea of a good time. Or any time, for that matter.

Bottom line: All I can say is that I’ve gotten a mosquito bite or two on the patio in the past — but during the time I had the InaTrap GR-330 Mosquito Trap working, no. It’s ease of use lets you set it up and forget about it (not waterproof so remember to take it back in after use outdoors), and its design makes it okay for use indoors where decor issues could crop up. If you’re looking to free yourself from the days and nights of the living bloodsuckers, and get queasy at putting on lotions or hearing things go “zap,” then spend $64 bucks instead. It could be worth it. 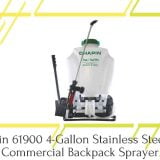 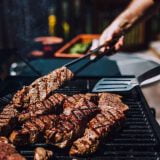 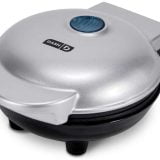 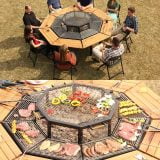 Grill And Eat At The Same Table, JAG Table Grill Lets Guests Grill Their Own Food 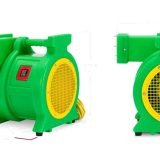 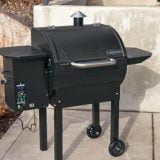