The Imperium CV300 Central Vacuum wants to give you the best of both worlds: quiet operation, while still maintaining plenty of suction power, a trait shared with the best central vacuum. Its CFM rating easily equips it with enough power and efficiency to handle areas as large as 7500 square feet. 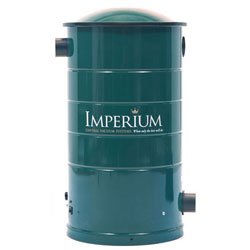 The Imperium CV300 Central Vacuum still manages to produce 138 CFM of cleaning power while keeping its decibels no higher than 58 dB, an incredibly quiet operation.

Imperium Central Vacuum Systems CV300 has 740 air watts of power being sucked into its powerful central vacuum system. Its success comes from its flow thru 2-stage motor, producing 15 amps from 120 volts. Surprising enough, it never exceeds 58dB when in operation.

All that power translates to this: 138 CFM. That’s 138 cubic feet per minute covered when these Imperium central vacuum power units get put to good use. That’s only 12 CFM below the Prolux Vacuum central vacuum unit, and it’s rated for twice as much square feet.

The Imperium CV300 Central Vacuum stores up to 6.25 gallons of debris in its filter bags. That is a gallon more than what the Allegro MU4500 Champion Vacuum Systems Central can handle. Since bags are used for both the dust bin and HEPA filtration system, maintenance is kept incredibly low.

Heavy duty steel construction is the name of the game that these powerful central vacuums from Imperium are playing. They’re built to last and we can certainly get on board with that. In fact, they’re so confident, you get a 10-year motor warranty.

Imperium CV300 Systems Central Vacuum Cleaners have two major downsides to their value: the use of bags and lack of hose. Even the Hoover Vacuum Cleaner at least has a hose, so we find it odd that nothing is included in the purchase. Since it isn’t a hybrid filtration system, you’ll have to worry about bags on top of buying accessories. Keep that in mind or consider the Prolux CV12000 since it comes with everything you need.

The Imperium CV300 Central Vacuum should have been the full package, accessories and all, rather than just the unit itself. It’s still one of the best central vacuum systems. There’s no doubting its suction power, and 138 CFM works wonders for 6000-sq ft. areas. It has a large capacity of 6.25 gallons and is incredibly quiet.