If you are looking for the best FPV racing drone, you’ll probably be looking for something that’s sturdy with decent operational range. And if it’s nimble in the air, that’s just an added bonus. The ImmersionRC Vortex 180 fits all these criteria, so you should definitely check it out. Just remember that it’s an ARF (almost ready to fly) drone. 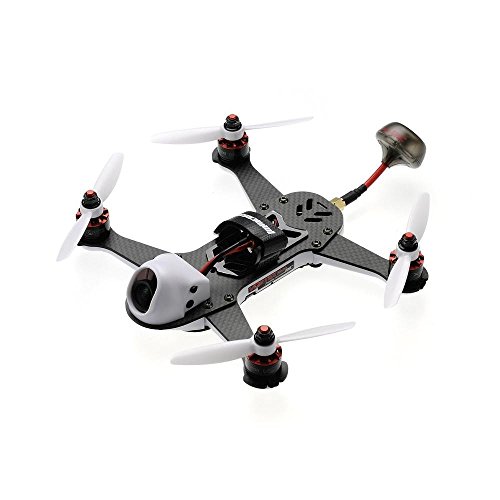 The ImmersionRC Vortex 180, like all ImmersionRC drones, is known for its fabulous construction. Made out of durable carbon fiber, the Cortex 180 should be more than okay if you crash it while learning to fly. This is especially important considering its top speed is 30 miles per hour, which is quite impressive for a beginner drone.

The top speed on the Vortex 180 is around 30 miles per hour. As a beginner racing drone this is actually quite fast and should help you get your bearings. If you want to start with something even slower, and that can fly inside if you are completely new to drones, make sure you check out the Holy Stone HS200. Another plus of the Vortex 180 Is that it’s incredibly nimble, making it easy to turn sharp corners and avoid objects.

It’s a common issue among beginner FPV racing drones, and even just drones in general, that flight time isn’t the greatest. You get some with half-decent flight time, but most skirt that line. The Vortex 180 takes one giant step backwards, though, and offers a mere 6 minute flight time. Very low even by beginner standards, try the Walkera F210 if you want something you can actually have decent practice time on.

Like all ImmersionRC drones, the Vortex 180 is well-built and sturdy. All of the electronics are nestled between the carbon fiber on the top and the printed circuit board on the bottom. The camera does stick out, yes, but it is protected by a hard plastic case should you accidentally ram into something. You can also check out the Arris C250 V2 for another well-constructed drone.

The camera on the Vortex 180 is a Fatshark TVL CCD with a HS1177 sensor. I don’t know why they can’t just give the resolution the video transmitter will receive, but considering it is a high-resolution camera, I think it’s safe to assume 720P. A cool thing you can do with the camera, though, is record in slow motion. If you’re a beginner, this should help you see where you went wrong if you do end up crashing.

The flight controller comes with ImmersionRC’s ‘Synergy’ technology for a more stable connection. Speaking of connection, the operational range is about 1.2 miles which is more than enough for a starter drone. But be warned that this isn’t a ready-to-fly drone. You must purchase the transmitter, receiver, and horrible battery separately.

The ImmersionRC Vortex 180 is an excellent drone, there are just so many things holding it back. While nimbleness is an excellent feature for a racing drone, a six minute battery life isn’t. It’s sturdy and well-built, but you’ll have to purchase other equipment on top of the almost $200 you’re already paying for the drone. But if you’re willing to make this investment you’ll be happy with your purchase.