The HP Omen X 2S isn’t just one of the best VR ready laptops, but also one of the first dual screen gaming laptops. Confused? Yes, you read that right: the HP Omen X 2S has a main screen and secondary display. More importantly, it’s beefed up to the point of handling most, if not all VR titles. 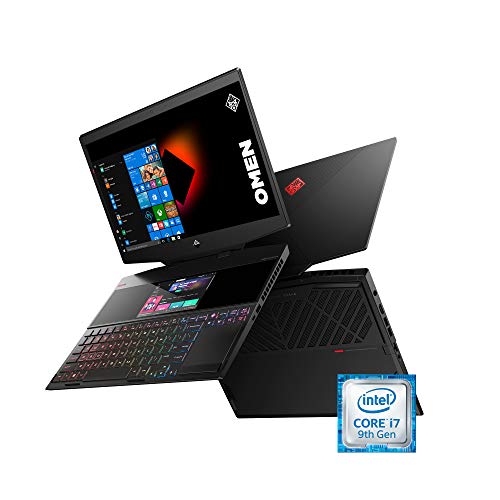 With specs like this, the HP Omen X 2S has plenty of power to the latest and greatest VR titles, like Elite Dangerous, Microsoft Flight Simulator, and Star Wars: Squadrons.

Having a beefy NVIDIA GeForce RTX 2070 Max-Q 8GB and hexa-core Intel Core i7-9750H, and 16GB of RAM has to count for something, right? As a matter of fact it does: running Elite Dangerous, for example, at 1080p on ultra settings and you should see well over 60 frames per second. You also get a sweet 144Hz refresh rate, with NVIDIA G Sync support. In other words: less screen tearing and jitter. For a better CPU, pick up the Alienware M17.

Unfortunately, that kind of power comes with a price, a terrible one that lowers your battery life to 4 hours on a single charge. Thankfully, you can expand the RAM to 32GB and look into more storage considering it just has a 512GB M.2 SSD. Port selection is fairly comprehensive, HDMI, Thunderbolt 3 (USB Type-C), audio jack combo, and three USB 3.1 Type-A ports.

If we had to describe the build quality of the HP Omen X 2S in three words, it would be: tough as nails. With an all-metal build, we aren’t surprised. You get the works in that regard, in addition to per-key RGB lighting.

If you’ve already had a taste for VR, or you want to get ahead of the curb, picking up an HP Omen X 2S is definitely the way to go, more so than the similarly priced Alienware M15. It’s featuring a top-tier GPU with a great CPU paired inside that allows you to gain access to most of the VR library and then some. And the second display offers so much utility outside of VR, something the MSI Stealth GS65 doesn’t have.

Having an HP Omen X 2S at your side while you romp around in VR titles is what power feels like. The NVIDIA GeForce RTX 2070 Max-Q is a monster of a GPU with a similarly powerful Intel Core i7. And to smooth everything out, a 144Hz refresh rate and G-Sync support.