If you’re looking for the absolute best Chromebook for artists, the HP Chrome 14 isn’t what you’re looking for. But you know who would? Parents looking to give their kids their first laptop. It isn’t a powerhouse in terms of performance, but it offers a nice sizeable screen with vivid colors and access to Google Play apps. 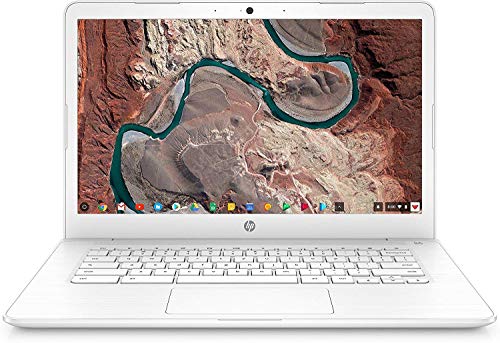 Bringing together features, pricing, and colors, the HP Chromebook 14 is a great option for parents looking for their kid’s first laptop. Chrome OS is snappy and very friendly to newcomers.

With a 14-inch screen, 1080p looks particularly good; the pixels aren’t stretched beyond their limits. It’s an IPS panel, so you’ll have a very wide viewing angle, capable of turning it almost to its side before seeing any downgrade to clarity. Colors are particularly vivid enough that art programs will thank you.

The HP Chromebook 14 is rated to handle 9 hours without a charger, and considering a single workday typically lasts 8 hours, you’re cutting it close. That’s still great, in addition to having USB-C charging, though the Google Pixelbook Go i5 Chromebook can hit 12 hours consistently.

Weighing 3.3 lbs, the HP Chromebook 14 is just about a pound heavier despite being less durable than the Google Pixelbook i7, which features an all-aluminum body. On a scale of 1 to 10, it sits comfortably on 6, since its plastic body has a bit of flex to it.

Aside from a smaller storage capacity, the HP Chromebook 14 is right on track for being priced at $270. However, it isn’t the best multi-tasker, whereas the Lenovo Chromebook S330 has four cores to utilize. Also, it’s better fitted for general use, not anything intensive like video editing and expensive art programs. But since it’s linked to the Google Play store, you can find lightweight, alternative options.

Despite limited resources, the HP Chromebook 14 still finds itself among the few lightweight laptops that would be great in the hands of kids—especially those interested in art. It has vivid colors on a nice, yet sizeable 14-inch screen. More importantly, access to Google Play means finding cheap alternative art programs to stretch their imagination.