How to Remove Speed Limiter on Electric Scooter

Moden e-scooters are a fun, convenient, eco-friendly, and generally safe mode of transport for both recreation and commuting, but there’s one issue some riders have with them- their generally low-top speeds. Below we’ll show you how to safely remove the speed limiter on your electric scooter.

Before we begin, it’s important to know that the speed limiter or controller on your e-scooter is there for a reason- it not only regulates top speeds on your scooter, but it controls its overall function as well. Furthermore, removing the speed limiter may actually be unlawful in your city or state, and can make your scooter less safe for general use, depending on its new top speed. Consulting state law regarding these matters is recommended before modifying your scooter in any way.

When the manufacturer’s top speed is reached, the sensor signals the processor to prevent the scooter from going faster.

Though step-by-step instructions on removing your e-scooter’s speed limiter will vary too greatly to definitively list here, there are three general methods to achieve the modification that depends on the design, and to a lesser degree, the age of your scooter. After you’ve determined the correct method based on your model, you can consult further specific sources for step-by-step instructions, which should include consulting your owner’s manual. Make sure to also dig out your manual when attempting to remove the scooter headlight bulb as well.

Some e-scooters use a DC-type driving motor- with these models, the speed controller functions by using a sensor on the driving wheel’s transmission system to count rotations on the wheel to determine the scooter’s current speed. When the manufacturer’s top speed is reached, the sensor signals the processor to prevent the scooter from going faster.

In such models, removing the speed limiting controls is as simple as removing that sensor, which can usually be done fairly quickly and cleanly by disconnecting its wires. In some cases, you may need Phillip’s head screwdriver. Generally speaking, the sensor can be reattached just as easily, as long as care is taken not to damage it during removal. This is generally the easiest type of speed controller to disable.

Most newer e-scooters have companion mobile apps that allow various manufacturer-approved settings to be changed.

Before starting this process you should be aware that modifying your electric scooter’s firmware can permanently damage your scooter and void its factory warranty, so be sure you’ve done your research about your specific model. Additionally, modifying firmware isn’t possible on every e-scooter, especially models from before 2017.

Once you’ve made the decision to give it a shot, you’ll start by checking to see if firmware modifications or custom updates are actually available for your model. If there are, you should be able to download the custom update to your mobile device and interface with your scooter using its built-in app. Most newer e-scooters have companion mobile apps that allow various manufacturer-approved settings to be changed- this is how you’d access the manufacturer’s firmware upgrades. For example,

Finally note that firmware updates are generally not reversible, so again, be sure this is a well-informed decision before risking a voided warranty or a non-functional scooter.

Another among the most common options when it comes to speed modifications is battery upgrade. Again, you should know that installing and running your scooter on a battery other than the one the manufacturer intended for your model can result in a void of your warranty and permanent damage to your scooter. In particular, running your scooter with a higher-voltage battery than it’s designed for can result in your scooter overheating more easily and damaging electronic components, or the electric motor itself.

Aside from the design of the motor itself, the battery of an e-scooter determines its potential top speeds, with voltages ranging from 24-48 voltages, from model to model, but with most models using a 24-volt lithium-ion battery.

First, you’ll need to determine if your scooter can accommodate a different, usually larger battery pack. You don’t necessarily need to install a 48-volt battery into a 24-volt battery pack to achieve higher top speeds, and too much voltage can, as mentioned above, damage your scooter. Here are some safety tips on how to replace an e-scooter battery.

Finally, keep in mind that even if your research into the procedure for your specific model indicates that a battery upgrade is a common and safe modification, you’re still risking a voided warranty and possible permanent damage. Also, keep in mind that you’ll generally still need to remove the actual speed controller itself to access the additional horsepower your new battery can provide.

Removing the speed limiter may actually be unlawful in your city or state, and can make your scooter less safe for general use,

What is the typical top speed of electric scooters for adults?

Though some electric scooters are designed with speed limit controllers that allow speeds of up to 30 mph, the majority of electric scooter models designed for adults have a top speed of no more than 20 mph.

Is it illegal to remove the speed limiter on an electric scooter?

Some cities and states may have laws regarding the modification of e-scooters and similar vehicles or may have speed limit laws regarding such vehicles that modifications may still be in violation of. Though this information isn’t always easy to find out, it’s advisable to check on the legality of such modifications where you live before going through with them.

They aren’t, in part because they generally run at far lower top speeds (thus aren’t suitable for highway riding), but moreover because while motorcycles use a throttle system to interact with their motors, electric bikes and e-scooters use a pedal system, which has a much lower learning curve for new riders and feels more intuitive for anyone who’s ridden a bicycle.

An electronic speed limiter differs from a mechanical one in that it’s a software-based integration to the design of the scooter instead of a mechanical one. While not necessarily impossible to disable, it’s considerably more difficult than simply removing the physical component of a mechanical limiter.

STAT: Top speed cannot be reached if an e-scooter’s battery level is at 10% or lower (source) 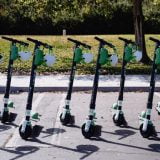 Where is the ID Number on an Electric Scooter? 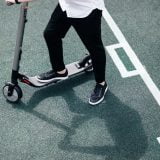 Why Won’t My Electric Scooter Move How Long Does It Take For Your Electric Scooter’s Battery To Charge? Best Helmets for Electric Scooter in 2022