How to Mod an Electric Scooter

Whether you’re looking to improve various aspects of its performance, doing your own repairs, or simply have an interest in DIY projects, learning how to mod top electric scooters can extend the life of your vehicle and even save you money.

While some modifications will require a bit of mechanical or electronic know-how, such as increasing the scooter distance or removing the speed limiter on an eScooter, many don’t require any real experience to pull off successfully without breaking a sweat or your budget. Below we’ll discuss some basic mods that can be done on most e-scooters and show you general steps and materials you’ll need for them. However, keep in mind that these tips are for experienced riders, as you have to be old enough to even ride an electric scooter.

One of the simpler mods that most people can do that can increase horsepower and top speed for your e-scooter is a battery upgrade- specifically, switching out your E-scooter’s factory-installed battery with a higher voltage battery that can provide more power to the motor and other components, increasing top speed and effective horsepower- the latter of which can increase performance on hills and rougher terrain.

Successfully upgrading your battery is contingent upon finding a higher-voltage battery that is compatible with your scooter both physically and electronically, and requires care during installation to avoid possible injury and permanent damage to your components. Of course, this mod requires an investment in a new battery, which can run you anywhere from $50 to upwards of a few hundred, depending on your make, model, and the desired voltage upgrade. For a cheaper option, follow these e-scooter maintenance tips to minimize the need for a replacement.

Specifically increasing your scooter’s top speed with this mod will also require either removing or disabling your scooter’s speed limiter or controller- which comes with its own caveats, and leads us to the next mod on our list.

One of the simpler mods that most people can do that can increase horsepower and top speed for your e-scooter is a battery upgrade.

Before you attempt to remove, disable, or modify your scooter’s speed controller/limiter, it’s important to know that your city or state may have specific laws against modifying such vehicles to increase top speeds. Furthermore, generally, such a modification will void your scooter’s warranty and could cause permanent damage to other components if not done properly.

Therefore, as with all modifications, some research is required and the risks need to be considered before going forward. That said, if you’ve decided to delimit your e-scooter’s speed limit, there are two ways you can go about it, depending on the model.

Many e-scooters feature what’s known as a DC-type driving motor design. In such models, the speed controller uses a physical sensor on the driving wheel’s transmission system to count rotations on the wheel and calculate the current speed- when the scooter reaches the factory-set top speed, the sensor signals the processor to prevent the scooter from going any faster.

Delimiting speed on such models will require some basic tools- Phillip’s head screwdriver at the very least- and a good amount of care when disconnecting wires to not damage any connections, components, or wires. Once the controller is removed, components can be reconnected and your scooter is successfully delimited.

Another word of warning here- hitting speeds higher than your bike is intended for with or without an increase in battery voltage can lead to overheating and even small electrical fires during riding, so caution even after the modification is done should always be used.

Some models of e-scooter, especially more recent models, have firmware that can be modified via integrated mobile apps provided by the manufacturer. Normally these modifications are simply software updates and don’t involve changing the scooter’s speed limit, but some users have created 3rd party or nonofficial firmware upgrades that do just that.

These modded software upgrades should always be free and can generally be found easily available for download to your device simply by searching your make and model with the keywords “firmware upgrade speed delimit” or the equivalent. Then it’s generally as simple as installing the modded firmware with your device. The same warnings apply here: firmware modifications will generally void your warranty, and though they’re less likely to result in physical damage to your scooter, any speed modification is outside of what manufacturers would consider a safe operation. Another thing that will void your warranty is damage caused by poor storage which is why you need to know how to waterproof your e-scooter.

One more mod that’s not only fairly easy to do but shouldn’t risk a voided warranty or breaking local laws is installing a windshield onto your scooter. While some e-scooter models may not have any compatible windshield models available on the market, many will and generally won’t require anything more than Phillip’s head screwdriver to install, and possibly 30 minutes of your time at most.

The advantages are several but foremost is that you’ll likely experience a slightly higher effective top speed by as much as 3 or 4 mph, since the windshield’s aerodynamic design will reduce the drag usually caused by your upper body, allowing air to curve around the bike more effectively while in motion. Secondly, you’ll experience a more comfortable ride, with better vision and fewer bugs, dust, and pebbles flying into your face at a higher speed. While prices may vary from model to model, a windshield could cost you as little as $23- a small investment with a great payoff.

Firmware modifications will generally void your warranty, and though they’re less likely to result in physical damage to your scooter, any speed modification is outside of what manufacturers would consider a safe operation.

How can I make my electric scooter go faster?

There are several ways to modify nearly any e-scooter to achieve higher top speeds, with varying costs and risks associated, but three of the most common ways are to remove the speed limiter, upgrade to a higher-voltage battery, or install a windshield.

Is it safe to remove my E-scooter’s speed limiter or speed controller?

Any modification to your scooter’s components, especially those affecting motor and electronic function, carries three primary risks- voiding your warranty, violating possible city or state laws, or damaging components. Lastly, increasing the speed of your scooter inherently makes it less safe to ride- so care, caution, and research are always recommended before performing such modifications.

How can do flash my E-scooter’s firmware for increased performance?

If modified firmware is available, it’s usually as simple as a quick internet search using your make, model, and keywords like “firmware mod.” You’ll then be able to download the update to your device and install it to your scooter’s electronics with the provided manufacturer’s mobile app. Note that such modifications are strictly unofficial and will never be provided by or approved by the manufacturer, however, and should always be available as freeware if they’re available at all.

STAT: E-scooter batteries are generally lithium-ion and rated for voltage no higher than 48V, with some exceptions (source) 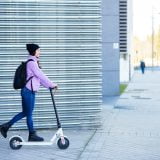 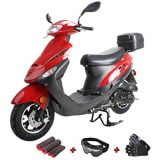 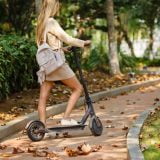 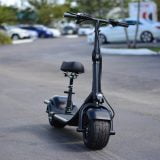 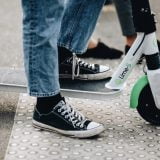 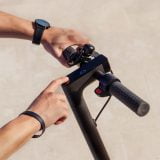 How to Inflate Electric Scooter Tires