How Do Grills Create a Spark?

If you find yourself asking “how do grills create a spark,” you’re likely talking about a traditional gas grill, which requires one to ignite the grill burner. The best grills need to start up reliably, and piezoelectricity offers the best method of ignition for gas and infrared-gas grills.

To understand how gas grill ignition works, you have to understand piezoelectricity. Luckily, it’s fairly straightforward to explain. While you’re looking into grill technology, you may want to read about how wood pellet grills work.

Moreover, if you’re looking to cook outdoors frequently, you’ll want a guide to building outdoor grills and you’ll need to know how grills are measured, so you get the right one for your needs.

Piezoelectric igniters use no external power, so a gas grill that uses one can often be used without being connected to power, giving you more options of where to place it.

Piezoelectricity is the name for the kind of electric charge that some solid materials accumulate. Such materials include crystals, ceramics, and even biological materials like DNA. Appliances that use piezoelectricity take the mechanical energy of the material and change it into electrical energy. In the case of gas grills, it’s a crystal that provides the catalyst, as opposed to how electric grills work.

The History of Piezoelectricity

The first recorded demonstration of piezoelectricity was in 1880 during experiments by Pierre and Jacques Curie, who used their knowledge of pyroelectricity and the structure and nature of various crystals, including quartz, cane sugar, and some salts during their experiments.

The discovery of piezoelectricity was technically accidental, and it was to remain mostly the stuff of laboratory experiments until World War I when it was used in early sonar technology. Eventually, it wound up being employed in a vast array of appliances and tools, including microphones and record players, and later, igniters.

How Piezoelectricity Is Used In Propane Grills

Piezoelectricity is used to create the sparker that makes a gas grill’s push-button igniter work. The igniter generates piezoelectricity by applying pressure to certain materials, often quartz crystal, where the energy is released as electricity. In a gas grill, a piezo igniter works by hitting a crystal surface inside the igniter with a small hammer, creating the spark that ignites the flame.

Every time you start the grill, the “pop” you hear is that hammer striking the igniter’s crystal. If you don’t hear it, that generally means the hammer mechanism is broken, which is usually a mechanical, not electrical, issue.

A malfunctioning igniter in a gas grill is usually due to a broken or dirty ignition rod, and if it still isn’t working after cleaning the rod, you’ll have to replace the entire igniter.

Will a gas grill still work during a power failure?

It depends on the type of igniter it uses. Because they work mechanically, piezo igniters require no external power to operate, meaning you could use your grill during a power outage with no issues. Some gas grills, however, use battery-powered igniters, which use a battery pack that requires charging. So, if yours isn’t charged, you won’t be able to use the grill.

When should you replace a spark generator?

The spark generator is the igniter on a gas grill, nowadays usually a piezo igniter. The piezo igniter uses an ignition rod to create a spark mechanically, and if it’s not functioning, you won’t hear the telltale “pop” that you’re familiar with. This may mean that it needs to be cleaned. If the rod has been cleaned and the igniter still isn’t working, you have a bad igniter and will need to replace the entire component. .

What does it mean when the igniter isn’t clicking or popping?

Piezo igniters use a small hammer-like rod that strikes a specialized crystal inside the igniter to create a spark. The clicking or popping you usually hear is the sound of the rod hitting the crystal. If you don’t hear it when you turn the ignition knob or press the ignition button, it means the ignition rod is dirty or broken, in which case it needs a cleaning or replacement.

STAT: Piezoelectricity was first used outside of laboratory experiments in the creation of sonar technology in WWI. (source) 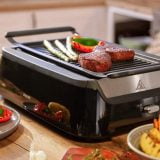 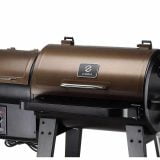 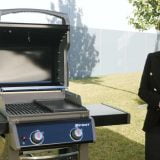 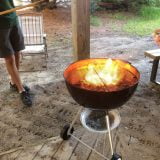 How Hot Does a Charcoal Grill Get? 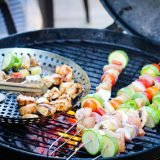 Where Are Weber Grills Made?