I desperately try to avoid cliches, at least at the beginning of reviews. However, there are times when they’re justifiably called for especially when reviewing the top-rated air purifiers in the market. That being said, the Honeywell HHT-145 HEPAClean is the Cadillac of air purifiers. It’s jam-packed with features that include a 1-18 hour timer, a UV light for destroying dust mites, an oscillating motor, a permanent filter that never needs to be replaced, and an ionizer for added cleaning power. Other devices that come close include the HoMedics TotalClean and the Honeywell True HEPA air filter.

But with all that comes to a $200+ price tag, so the real question is it worth it?  And to answer your question in one word, I can simply respond by saying “yes” or resort to “you bet your allergen-induced, sneezing, watery eyes” it without a doubt works. It could well become your new firm favorite best air purifier for mold and dust.

The Honeywell HHT-145 uses a HEPA filter, and in a time past you had to replace these about once a year depending on use. Not with this model. It includes a HEPA filter that can simply be vacuumed and put back in the machine as if it were brand new. That alone has to account for some significant cost savings, at least in the long term. So suffice to say that is a big plus in my book since I hate to invest in a product that I’ll only have to dump more money into to make it effective (I own a canister vacuum in case you were wondering). You can also go through our Honeywell HFD 120 Q review for another air purifier with permanent filters.

As with other Honeywell air purifiers, this one includes an odor filter. I opted not to use mine since I have some of those scented sticks in my bedroom to keep it smelling like vanilla. What can I say, it’s better than day-old socks or that inevitable room smell you get if you’re a guy. Moving on.

At first blush, the Honeywell HHT-145 looks like a fan, and rightfully so. In addition to a 1-18 hour timer, there is an oscillation button that rotates the fan about 200 degrees, maybe more, from left to right, ensuring that more of the room’s air gets pushed around and freshened up. There is also an optional UV light, which if you didn’t know kills dust mites, bacteria, and viruses. I’m not sure why you wouldn’t just leave this feature on. Although, I should note that a relatively bright blue LED is illuminated when this feature is in the on position. It’s bright enough to light up a dark room and if you’re sensitive like me, disturbs you at night during sleeping hours.

Honeywell says that the HHT-145 HEPA Clean air purifier is capable of circulating the room’s air up to 5 times per hour. Of course, this figure will vary depending on your room size and Honeywell doesn’t really say how large of the room they’re referring to, but given the fan’s speed, which has a good amount of variance, I don’t see why not assume that applies to the average size bedroom. That being said, the fan, though billed as whisper-quiet, isn’t what I’d call it, at least at the highest setting. Furthermore, at the lower settings, when the frequency of the fan is less, the whole thing rattles and creeks a bit, forcing me to turn it up beyond 50% power. But hey, it’s a fan, not a radio, so by all accounts, its decibel output is more than tolerable, just don’t expect it to push air around and not be heard from. You may also want to check out the Honeywell Home review for a similar but compact Homewell purifier.

Unfortunately, the Honeywell HHT-145 has to be a few feet from the wall to be effective. Fortunately, its white facade makes it blend in with my bedroom’s surroundings – I have white walls – but I’d rather stick it in the corner and forget it was there. Though it is rather large, as in tall, in size, at least compared to the last Honeywell air purifier I reviewed, so it’s a bit more difficult to hide it.

As with any air purifier, it’s always a bit tough to gauge how effective it really is. In my last Honeywell review, I noticed a significant drop in dust collection throughout my room. The Honeywell HHT-145 HEPAClean Germ Reducing Air Purifier, needless to say, has the same impact and then some, though because I can’t see viruses and bacteria. I can only speak to my health, or should I say, lack of getting sick. That said I continue to wake up without a stuffy nose and notice that my overall sleep, as well as energy, has improved. Sure, it might be psychosomatic, but can’t that be said for anything.

Bottom Line: The Honeywell HHT-145 HEPA Clean air purifier is the Cadillac of air purifiers. It lacks a remote, but other than that, this air purifier really has no shortcomings. 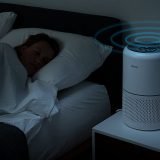 What Happens If You Don’t Change an Air Purifier Filter?