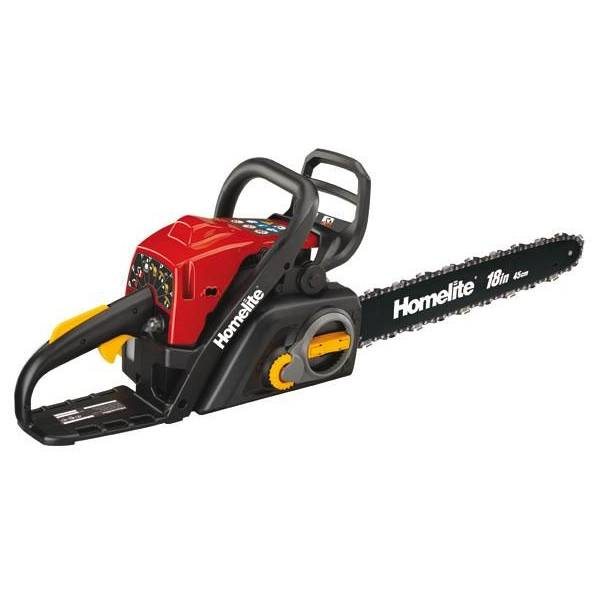 While the RYOBI 18v 10″ chain saw I previously reviewed and this Homelite 18″ Gas chain saw are both actually made by Homelite, there’s not a lot of similarity past that.  The RYOBI model is just a distant cousin to this monstrous beast of a chain saw.  When I first sat the case that it comes in down next to the smaller battery powered chain saw, I just wanted to laugh at how small it looked.  Not taking anything away from that one, because it does what it’s supposed to do and does it well (as noted in the review), but compared to the biggest chain saw Homelite offers, the RYOBI model looks like a toy. If you need more tools to keep this chainsaw in good shape, then read our best tools list.

One of the nicest things about it though, is that even though it’s HUGE, even when gassed up it’s still light.  Weighing in at only ten pounds, you don’t have to worry about getting tired during a long day of cutting.  Truly though, your day might not be as long as you think – this monster chews through logs like (and I hate to use such an old expression, but it really fits) a hot knife through butter.  I’ve used plenty of other chain saws, but this one is easily one of the fastest. 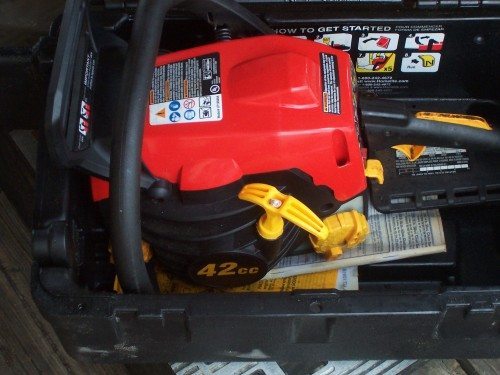 It also has some very impressive vibration dampeners on it – normally after about a half an hour to an hour on a chain saw I can start to feel the vibrations in my fingers ever when I’m not cutting – not so with this beauty.  An hour straight of cutting in the back yard of my in-laws, and I still felt like I had just picked up the saw.  It really made it easy for me to lose track of time since I didn’t get the least bit fatigued. If you need to split logs without using an axe, then read our Homelite 5 Ton electric log splitter review.

Another problem I had with other chain saw models was jumping, and I didn’t notice any of that here at all.  I was cutting through logs up to 17 inches in diameter with not so much as a single issue.  Now I know a lot of people will say “well you had a brand new chain so yeah it worked that well” – and yes, at the start I did have a pristine chain.  About midway through testing though, I switched it out for the chain I used all last year.  You wanna know something?

It still blazed through the logs like no one’s business.

So yes, even when using a chain that was heavily used last year (my father in-law uses a wood burning stove as his primary heat source – he used that chain on all of last year’s wood supply), this thing couldn’t be stopped.  It might have slowed the cutting process a tiny bit, but nothing you’d ever notice unless you were using a stop watch. Read our Homeright C800971 painter painting projects review to get painting done faster.

The inertia brake on this chain saw is quite good, stopping the chain from spinning in a fraction of a second – safety definitely seems to be a prime issue with them on this.  I did have a problem with starting it at first though – it seemed like every time I started it, the chain saw would end up stalling out a few times (and I made sure to follow every direction in the book in case I was doing something wrong).  It wasn’t much of a big deal because the cord isn’t hard to pull though; just something I wanted to mention.

Yet another feature is the tool less chain tensioning on this model – while some other chain saws also come with this now a days, it’s a good bullet point to have.  The only problem I had with it though was that the plastic knob on the tensioner seemed to like to slip – I had to really work it once or twice to make sure it stayed at the right tension.  The case that it comes with is also quite rugged, and it can survive drops of at least six feet without incident (I didn’t have any reason to go higher than that – I can’t think most users would have the case up much more) – and yes, the chain saw was in the case when I tested that.  Also, unlike the RYOBI saw, this one has an automatic chain oiler (still hoping the next generation of the RYOBI model gets that). 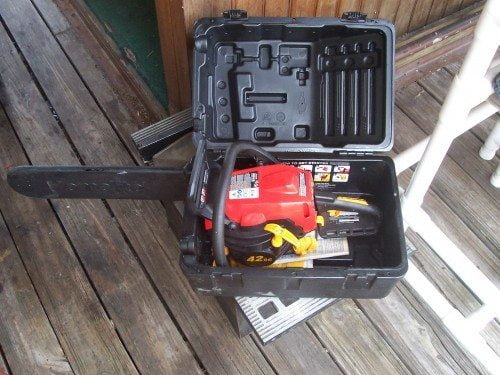 All in all, this is a great saw for someone to have.  It’s lightweight, it’s easy to use, and it’s tough enough to tackle most any job.  You can use this thing pretty much all day long and not feel any stress because of it.  And the best thing about it?  The price!  I’ve seen smaller chain saws with less features go for a lot more that this beauty – being able to snag a chain saw of this quality for under $160 is almost too good to be true.

Final review score is four and a half stars out of five – the tensioner issue and the stalling out after starting were the only things to keep this from a full five out of five.

You can find the Homelite 18 Inch Gas Chain Saw at Home Depot stores for $159.00 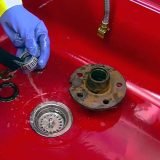 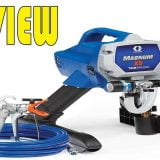 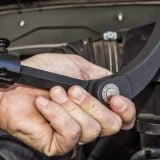 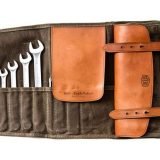 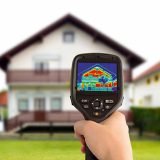 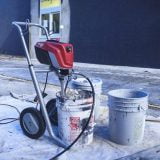