Fans come in all different shapes and sizes to fit a need, even a niche one. In this case, if your need is a fan that’s portable, easy to carry, but can still pump out good airflow—the Holmes 12-inch Blizzard Fan can be the best fan for the job. It’s compact, has an oversized carry handle and its circulation gets a boost from the grill. 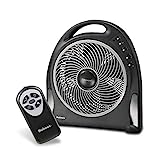 The ideal fan to have if portability is a need, thanks to its compact nature. Unlike other box fans, this one has a grill that rotates to increase airflow by 40%.

We were most impressed by the fan’s ability to push out air. For starters, it has 5 fan blades—but that wasn’t the entire story behind its powerful airflow. It has a rotating grill that adds an additional 40% power, unlike the Glovion mini desk fan. Wherever the Holmes Blizzard Power Fan is pointing is going to get a strong gust of wind. Unfortunately, it doesn’t have a wide area coverage like the Honeywell QuietSet or Lasko T42950 does. It’s focused on one area like the Vornado 660 Large Whole Room Air Circulator Fan.

Even though the Holmes HAPF624R UC is small in size, it still works beautifully in large rooms. It helps that it has three speed settings, with the third being the strongest airflow. In addition to speed settings, it has sleep and breeze settings, which come in handy at night or when you just want a cool breeze. One issue, however, is the remote controls. The icons used for each setting are difficult to understand without trial and error. It has a large handle along the top for carrying while at the bottom it has a storage place for the power cable.

The Holmes 12-inch Blizzard Fan did more than what its $40 was asking for. Like some of the greatest window fans, it proved its worth in large and medium-sized rooms, showing that it can run with other fans in its category. The grill was especially helpful as it did well to soften its lack of oscillation—especially pointed towards a central location for the air to spread out. Given its performance and overall portable design, we are happy to give this fan our seal of great value.

The Holmes 12-inch Blizzard Fan is no doubt a great fan; in fact, we even suggest picking up another one for improved airflow—just make sure you have the space. It may not oscillate but its better airflow from the grill made up for it. There are plenty of speed settings to choose from, and its compact body and handle make it easy to move. 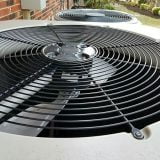 How to Measure Fan Size