Driving your vehicle through bumpy terrain? Then your Best Electric Bike shouldn’t be subjected to the dings and scrapes of your bike hitch. In this case, the Bike Rack for Electric Bikes you’ll want is the Hollywood Sport Rider SE. It has a load capacity of 160 lbs, along with a no-wobble system to prevent jostling. 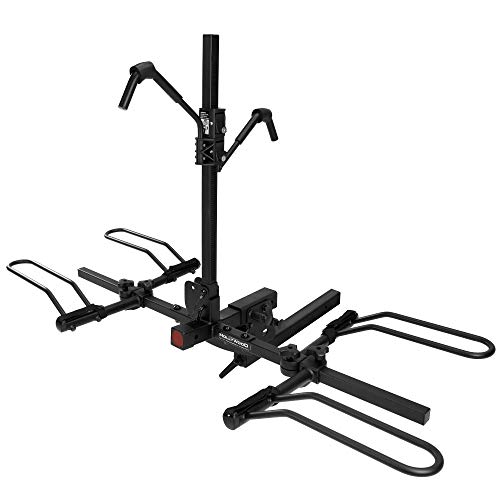 With an impressive 160 load capacity, the Hollywood Sport Rider SE is perfect for those hauling electric bikes. Its no-wobble system adds knobs for unprecedented tightness.

With extra heavy-duty wheel holders and mostly metal construction, you’re getting durability that’s arguably just as good as bike racks priced twice as much. However, it’s strange to note the receiver adapter is plastic rather than metal. At its strongest, it can handle up to 160 lbs, though! That gives you 80 lbs to allocate to each bike, which is especially great for electric bikes. That’s 60 lbs more than the HR1450Z E model. If you own heavy bikes like fat tires and e-bikes, the Hyperax Electric Bike Rack will come in handy.

If you were hoping the Electric Bikes Hollywood Sport Rider SE would have its battery, you are sadly mistaken. Bike racks usually don’t have any battery-related features. But if you are hauling e-bikes, you should remove the batteries before setting off on your journey.

To minimize wobbling, the Hollywood Sport Rider SE makes use of a hitch pin and a no-wobble system to tighten up the rack, whereas the Thule T2 Pro XT uses a kind of wedge that’s much stronger in action, but the Sport Rider SE still gets the job done beautifully. Locking frame hooks can be brought down to stabilize the bike, with a security cable to wrap around the bike and prevent theft.

The Hollywood Racks Sport Rider SE2 is in a unique position. You’d expect a high price due to its versatility, performance, design, and easy access—but that isn’t the case. Its patented no-wobble system and weighty load capacity are available for an affordable and competitive price. Anything close would be the Thule EasyFold XT 2, costing you nearly twice as much.

If you are actively looking for an alternative to expensive bike racks, the Hollywood Sport Rider SE might be precisely what you need. This is especially true if you have an electric bike since they tend to be heavier, and the Rider SE has the extra load capacity and a no-wobble system to handle the strain.