Kitchens don’t usually come to mind when you’re thinking about the best grills, but a good grill could do wonders for your cooking potential. Specifically, you’ll want to be looking for the best indoor grills or the best electric grill. And to this end, the Hamilton Beach electric indoor searing grill should be on your list of considerations. 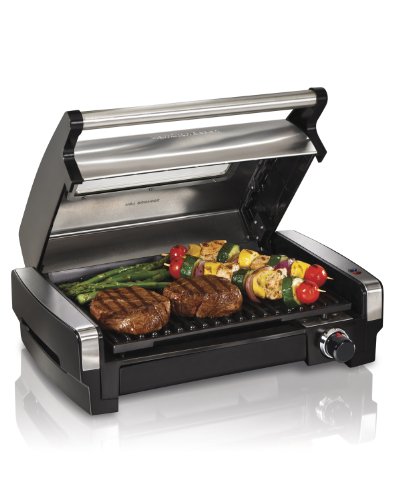 Why We Like It – Hamilton Beach Electric Indoor Searing Grill

The Hamilton Beach electric indoor searing grill would be a fabulous addition to anyone’s kitchen. And if you wanted to use the grill outside, that’s possible too. It’s lightweight, so you don’t have to worry about it weighing you down, and the grill surface is large enough to feed six people. You can also opt for the best built in BBQ grills for a sturdy and integrated option, but you’d lose out on the portability.

This Hamilton Beach indoor grill has a high searing temperature of 450℉, which makes it one of the most powerful grills we’ve seen so far. On top of this, there is a temperature control knob, so you don’t have to always sear at max temperature. Of course, not everyone needs something this powerful, so consider the Secura GR-1503XL if this is you.

The cooking surface is another feature the Hamilton Indoor Electric Grill excels in. With a 118-square-inch grilling surface, you’ll be able to feed up to six people without any problem. Where the grill lacks versatility is with the lack of a press, so grill flavor sandwiches, with those satisfying grill marks, are out of the question. Or you can opt for the George Foreman electric grill GGR50B.

At a little over eight pounds, the Hamilton Beach Smokeless Grill is about as light as it gets. The Zojirushi Indoor is lighter, but only by a pound. The Hamilton Beach is also constructed from stainless steel, and not aluminum or heavy plastic like most indoor grills. It makes it more durable, and because of this, you can use it as an outdoor grill without worrying about damage. The George Foreman indoor/outdoor grill works just like this Hamilton Beach grill. Although, for a solely indoor grill, you’ll want to read our Philips smokeless grill review.

Easy cleanup is always a plus when it comes to indoor grills. The Kenyon electric grill and the Hamilton Beach provide just that. The removable nonstick plate, and almost all other parts, are dishwasher safe. The extra-large drip tray is always nice to have in an indoor grill. And, you guessed it, it’s dishwasher safe. The non-stick plate also works well at, well, being non-stick. Almost no oil is needed while on the grill griddle.

Looks may not be the most important thing to you when buying a grill, I understand. But it doesn’t hurt to have an attractive piece decorating your kitchen. The grill itself looks pretty sleek and attractive and should blend in with most kitchens well. The grill hood also comes with a window so you can keep an eye on your food while the lid is closed.

Honestly, there’s not a whole lot to complain about when it comes to the Hamilton Beach Electric Indoor Searing Grill. You’ll have to invest more in an additional sandwich press, but if you don’t have those too often then it’s a non-issue. As long as you don’t do something wrong, such as forgetting to turn the meat over, then the Hamilton Beach Electric Indoor Searing Grill should work wonders.

How To Dispose Of Old Grills

What is the Difference Between Woods for BBQ Grills