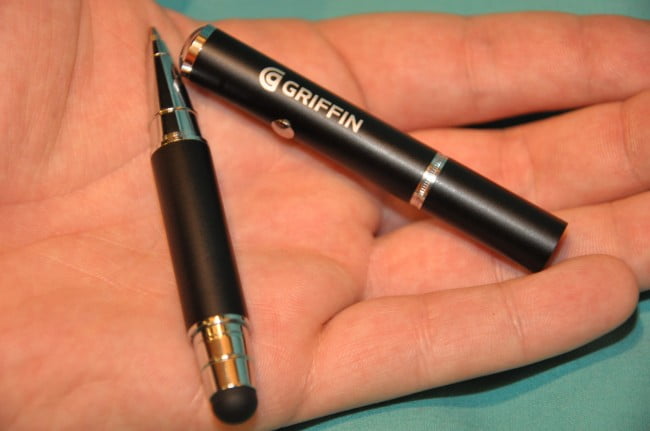 Eschewing a fancy name, the Griffin Stylus + Pen + Laser Pointer does absolutely everything advertised on the box. Part executive wondertoy, part creative multitool, the Griffin Stylus is a bit pricy when you consider that all three of its features can be purchased separately for a fraction of the cost, but the convenience and the quality of this product easily make up for the discrepancy.

The first thing that struck me about the Griffin Stylus + Pen + Laser Pointer was the weight to it. Now, while said weight may not make it an ideal thing to clip to a breast pocket, it feels absolutely wonderful in the hand, with a nice heft that feels sturdy, solid, and just built well overall. The pen’s clip is tight but still easy to slide onto the edge of a pocket, or onto a string, and it looks very professional with its matte black exterior and silver details.

When it came time to use the Griffin, I was very pleased with everything I got out of it. As a pen, it’s fairly standard. It writes well and clearly, without requiring too much pressure or the fear of leaving little trails of ink from lightly sliding the pen across paper. It works just right, and has an easily replacable cartridge when your ink starts to run low, but to be perfectly honest, I expected something a little fancier than just a standard ballpoint. The fact that it is standardized turns out to be a plus in the long run, making ink replacement a simple task without having to search for special cartridges. The only real downside to the pen is that the place where the top half of the pen containing the cap and the laser pointer is located is not intuitive, and both myself and most people I’ve handed the pen to have spent more time than is probably normal trying to figure out exactly how to write with it.

The laser pointer is also fairly standard in nature. With a small circle button on the side of the cap, the red laser turns on, with decent intensity and distance. It’s not going to help you spot something on a hill three miles away, but in an indoor or office environment, it’s absolutely perfect, and considering the presentation of the product, meets expectations in every way. The only concern I have considering the laser pointer is the button placement. If you remove the cap of the pen and click it over the stylus when writing, my hand at least has a tendency to grip the pen right where the button to activate the laser is located, so I am always fearful of accidentally shining the laser into my own eye when I am writing.

As for the stylus third of the Griffin Stylus + Pen + Laser Pointer, I have absolutely nothing but great things to report. Using a sort of rubber bubble tip that emulates the feel of a human finger tip, the stylus is smooth and responsive without leaving smudges or scuffmarks common from plastic or hard styli. Based on its design, the stylus also works with devices that use capacitive touch like my laptop’s touch pad, cellphone touch screens, and iPads just as well as it works with my Nintendo DS or other stylus-driven device. Everything I’ve used the Griffin stylus with has worked better than imagined, with nice, fluid, and responsive movements.

If you’ve already got all three devices handy like a true office pro, the Griffin Stylus + Pen + Laser Pointer isn’t going to bring anything new to your arsenal, but it does combine the best of all three devices into one handy, good-looking, quality tool. I personally don’t go anywhere without mine now, whether I’m working on something at my desk, using it to sign a check for lunch, or showing somebody a funny video using a mobile device. Without being necessarily original, the Griffin Stylus + Pen + Laser Pointer is a quality product that looks as good as it feels to use.

Bottom Line: The Griffin Stylus + Pen + Laser Pointer doesn’t innovate in the slightest, instead offering incredible performance for all three of its functions with very few setbacks. The price point may be a little steep for some people, but with easily replaceable batteries and ink, the life of the Stylus + Pen + Laser Pointer is guaranteed to go as long as you need it to.

The Griffin Stylus + Pen + Laser Pointer is available direct from Griffin for $49.99. 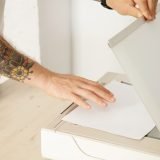 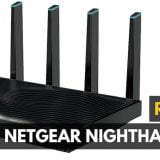 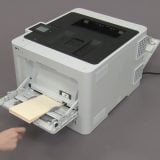 Brother All In One Laser Color Printer Review 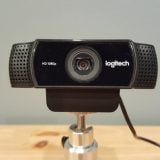 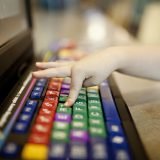 When I Press a Key on My Keyboard, It Types Different Letters 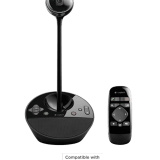